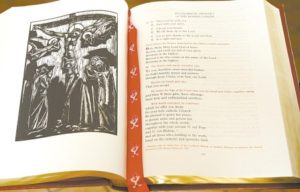 It’s coming!  Are you ready?  Are you feeling the anticipation building?  Are you prepared?  Excited?  Unsure?  Confused?

We are less than one week from the implementation of the third edition of the Roman Missal.  In the coming weeks we’ll fumble around a bit as we get used to the changes.  As the weeks stretch into months we’ll become accustomed to hearing the new language and become more familiar with the words we say.  And in a year (or more) it will be second nature.

Personally I’m excited by the changes.  I have read through the Order of Mass for the new translation and I’ve read sections of a handy little Guide to the New Translation of the Mass by Edward Sri.  Although the words aren’t ingrained in my mind yet, I’m becoming more familiar with what I will hear and where the changes are.  At my parish we’ve already been singing the Mass parts (Gloria, Sanctus/Holy, holy, Agnus Dei/Lamb of God, etc.) and our priests are spending a bit of time before Mass each week to talk about one aspect of the coming changes.

There has been a lot of time and attention paid to the upcoming changes; time spent at the parish level and diocesan level and throughout the English-speaking Catholic world through various kinds of print, media, and online publications.  Thus, I don’t want to spend any time on the mechanics of what we should expect when show up for Mass in six days.

Instead I’ve been thinking about these changes in terms of what I have learned through the preparation period that we have been in as a Church and what I am looking forward to in the new Mass.

I’ve learned the difference between and meanings of the phrases “dynamic equivalence” and “formal equivalence.”  I’m looking forward to the day when I can impress people at a cocktail party by using those phrases in conversation.  Too bad I never go to cocktail parties!

I’ve also finally seen more clearly the connection between the Liturgy and Scripture.  Not that I didn’t know that Scripture is all through the praying of the Mass, I did, but it is now so much more obvious.  Take for instance right before Communion when we will now say:

Lord, I am not worthy that you should enter under my roof,
but only say the word and my soul shall be healed.

Almost the exact wording from Matthew 8:8!!  Passages like this make me realize exactly why this new translation had to be done.  We should be able to recognize Scripture throughout the Mass, we should be able to make those connections easily, and visitors to our churches should also recognize how Scripture-based the Mass is.  This translation will facilitate all of that.

One recent Sunday at Mass I looked down at my two children sitting in their infant seat carriers and it occurred to me that they will learn the Mass according to this new translation and never know it as I learned it.  It was certainly not a lamentable thought in the least.  It was kind of like a light bulb had gone off: the new translation is being written not just for us in the here and now but for future generations.  It is not just about our history but also about our future.  I thought about future discussions I might have with my boys about the Mass and its elements and I realized how much more I understand it now than I ever have and how I’ll be able to impart that knowledge onto them.  And more importantly, for them to be able to see the connections between Scripture and the liturgy so clearly from the very beginning.  I’m so excited for my children!!

I’m extremely grateful that my children will learn this new translation and it’ll be all they know (until/if a future edition ever comes out).  I’m sure that even once the new responses and prayers start becoming second nature for me, there will still be times when I may revert to old habits, yet my children won’t know any different.  I know this isn’t going to be true for everyone, but for those who are in a similar boat as I am, I’m sure you can relate.  I’m also willing to bet that many children will pick up on the changes faster than most adults (similar to how children are able to learn a foreign language faster than adults do).

And finally, one particular Star Wars joke may take on new meaning.  Something to think about the next time your children are playing with light-sabers and you hear, “May the force be with you.”

And when you hear your inner voice automatically say, “And with your Spirit,” you’ll know the new translation is becoming second nature.

8 Replies to “New Translation Excitement; or, How Star Wars will take on new meaning for Catholics”