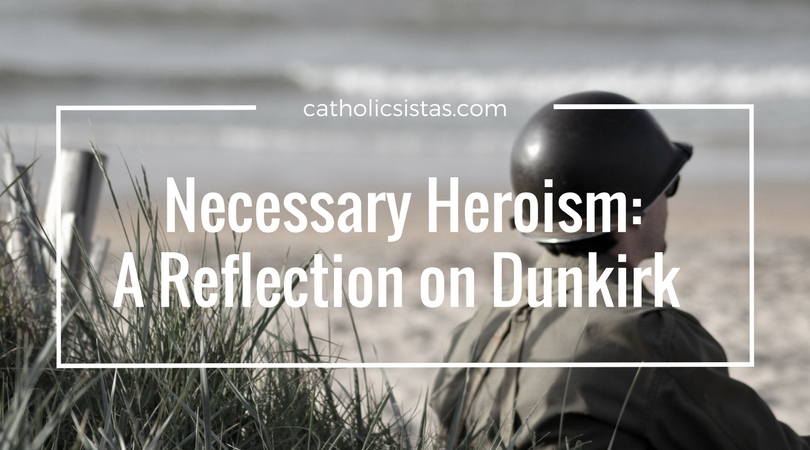 Disclaimer: This blog post contains spoilers.  Also, Dunkirk contains violence and intense situations.  I cried for half of the movie (no exaggeration, just ask my mom).  If you can handle bombs exploding and gunfire (and wasting a fair number of tissues) go out and Redbox Dunkirk as soon as it’s Redboxable.

Dunkirk came out a month ago, so I’m a little behind the times.  But I recently re-watched it (participating in my father-in-law’s bi-annual trip to the movie theatre, an event meriting pomp and circumstance), and there are some things that I want to share here.

Dunkirk (the battle, not the movie) was a complete failure. Thousands of British and French troops were crowded on a beach, stranded, being cherry picked by the enemy.

The men are tired.  They’re scared.  There’s a horrible, jarring scene of a man who dives into the water, giving up entirely.

But, in the end, the men are saved.  Civilians drive their tiny boats to pick up the soldiers, who are welcomed with loving arms into their homeland.

While I was watching Dunkirk, I couldn’t help thinking of “the valley of the shadow of death.”  The darkness, the evil, the fear, the despair. It’s overwhelming.

Dunkirk brings you face-to-face with the fact that heroes don’t live in heroic worlds.  Are you waiting for the best possible circumstances to be a hero?  What?  Do you see the irony in that?  Nobody needed the pilot to defend the beach in peacetime.  They needed him during war; when the men are cowering, fearful.

We have all seen horrible suffering in our own lives. I watch the floods in Houston, the violence of angry protesters.  I see the hurt and despair in the face of a friend who’s suffering, in the faces of the children I teach who are lonely, confused, drowning in broken families.

Dunkirk smacks you in the face with how normal, how broken these heroes are.

The image of a hero with flowing blond hair and a white horse is, frankly, idiotic.  A hero’s hair isn’t clean (why do you think Mother Teresa wore a habit?).  A hero’s ride has mud on his feet (do you think St. Francis’s feet were clean?).

The Necessity of Heroes

I believe that we have come to see “heroes” like “freak accidents,” something that happens every now and then.  We are pleasantly surprised when someone shows strength and sacrifice, when someone stands up for the right.

This is a horrible mindset.

We need to be the men and women in our tiny little pleasure boats sailing to Dunkirk.

We need to be the pilot that sacrifices everything, who flies even when he is out of fuel, totally spent, for men whose faces he can’t even see.

It doesn’t matter, because God is at our side.

The world needs us.  It has needed us.  We are already late, but thank goodness we are not too late.

God has given us the power to decide.  We can submit to despair, focusing on our weaknesses. Or we can grasp at hope, and sail to Dunkirk.