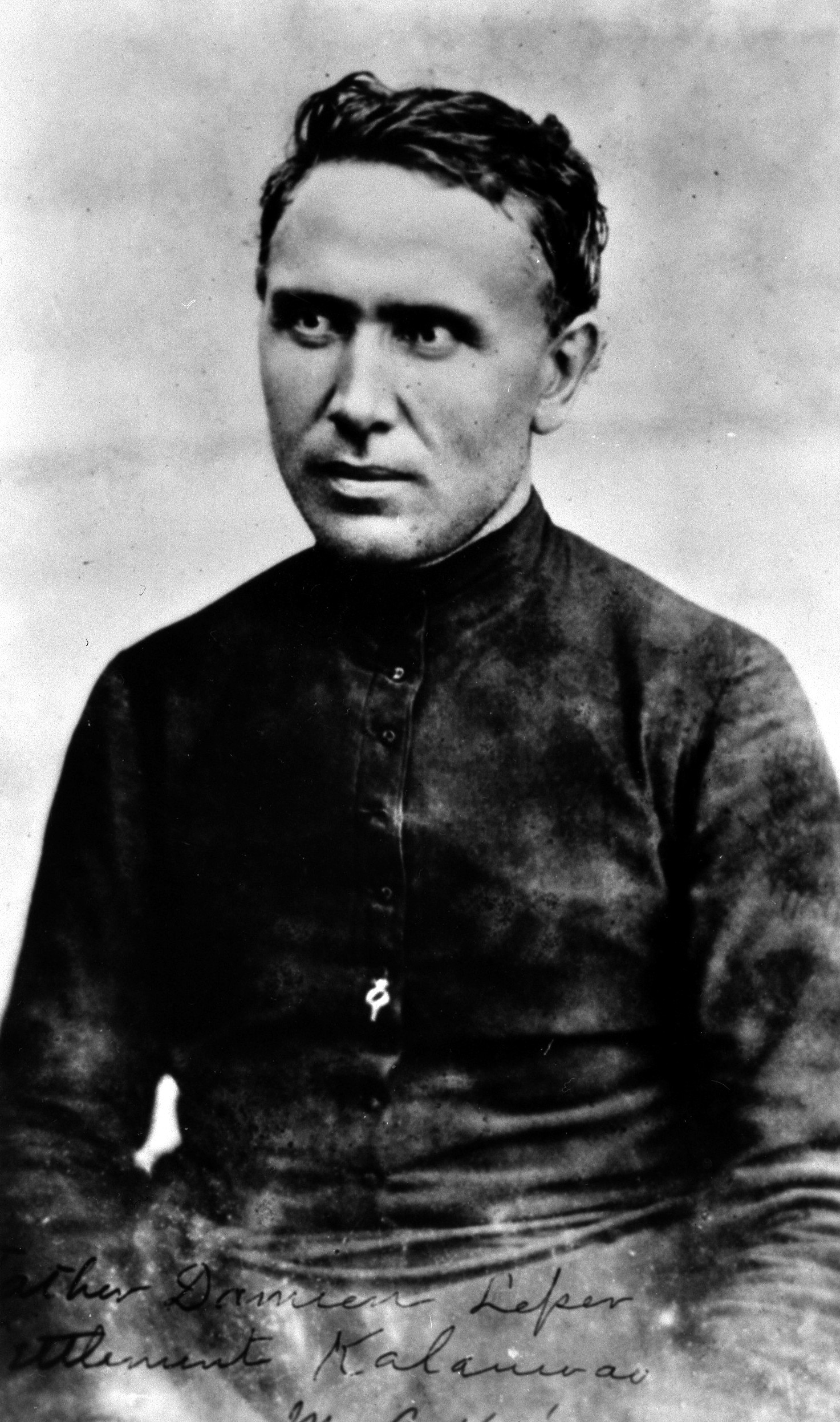 Our first wonderful priest, Father Marcus Pollard of the Arlington Diocese, once told us that if we want to develop a devotion to a saint, we first have to develop a relationship with that saint.

“You wouldn’t just walk up to a stranger and say, ‘Hey, wanna give me some help here?’” Father Pollard said. “Get to know the person first by reading about him and meditating on his life. Then go ask him for favors.”

At the time, we were brand-new Catholics who barely knew Jesus and Mary, much less God’s more obscure friends. Then someone gave us a book and introduced us to our first heavenly friend: Saint Damien of Molokai. Of course, back then he was a mere “Blessed” Damien, but we were still so impressed by his story that we ran to Amazon.com and purchased the movie about his life (which I highly recommend): Molokai: The Story of Father Damien.

If you haven’t heard of our amazing friend in heaven, let me tell you about him. Father Damien was actually born Jozef De Veuster in 1840 to a Catholic farming couple in Belgium. Along with three of his siblings, Jozef was called to religious life, becoming a priest in the Congregation of the Sacred Hearts of Jesus and Mary, a missionary order known as the Picpus Fathers. Father Damien, as he was renamed, prayed fervently to go on a mission and God granted his request three years into his priesthood by sending him to Hawaii.

At the time, Hawaii was experiencing an outbreak of leprosy and those suffering the disease (formally called Hansen’s Disease) had been placed under a government-mandated quarantine on the island of Molokai. Nine years after Damien arrived, the bishop asked for priests to rotate through the colony and several priests volunteered, including Damien.

Damien was the first sent to Molokai in 1873 and the original plan was for a fellow priest to relieve him after three months. As it turned out, Damien never left the island; he spent the remainder of his life—16 years—caring for the physical, spiritual, and emotional needs of the afflicted residents. Damien stayed not just because he wanted to, but because the government of Hawaii eventually legislated that anyone who set foot on the island could never return from it.

Having grown up on a farm, Damien was perfectly suited to building up a community that had virtually degenerated into slums due to lawlessness and despair. He built homes, orphanages, schools, hospitals, and churches. In fact, many of the buildings he built by hand are still standing on Molokai. Despite warnings from his superiors not to touch those suffering from leprosy or to eat with them, Damien knew that love demanded he embrace the people in all their humanity. He hugged them, ate with them, bandaged their wounds, bathed them, fed them, and prepared their bodies for burial. He even built their coffins himself.

In the movie about his life, a man dying of leprosy asks Father Damien why he isn’t afraid to touch him like everyone else. Father Damien’s answer is perfect: “I put myself in the hands of Our Lord and the Blessed Virgin. They will protect me as long as I’m needed.” Prophetically, Father Damien ended up contracting leprosy himself, an event God used to galvanize both the world and Church leaders to care for the lepers as they deserved.

By the time Damien died, an order of nursing nuns from New York were setting up hospitals on the island and supplies were flooding in from donations sent from all over the globe, as a tribute to his beautiful Christian witness. More than one famous person—including Treasure Island’s Robert Louis Stevenson and Mahatma Gandhi—publicly expressed admiration for the love Father Damien poured out on his beloved spiritual children.

In my own family, Father Damien holds a place of high honor. We were so inspired by him that we named our first son Damien. I knew our son was going to have a very special relationship with this priest when I set his baptism date for six weeks after his birth, on May 10—only to discover that was Blessed Damien’s feast day! My husband and I promised ourselves that if this wonderful friend was ever raised to the altars and became Saint Damien, we would be there in Saint Peter’s Square when it happened.

And we were. On October 11, 2009, we stood among the throngs as Pope Benedict VXI declared our son’s patron would henceforth be known as “Saint Damien of Molokai.” It was incredible to meet other families whose little Damiens had also been named in honor of this amazing servant of God. I prayed then, as I do often now, that my son’s heavenly patron would convince Jesus to call my own son to the same level of holiness.

Whenever my son seems to be going in the exact opposite direction, however (like today), I take comfort in the fact that Father Damien was just as human as the rest of us and still made it. He had a bad temper. He was hygienically-challenged and often neglected to bathe. He was, at times, unnecessarily abrasive to others, especially those he perceived as not doing enough to help others.

He was notoriously difficult to get along with; several priests came to the island to help Damien after he contracted leprosy, but all were “run off” by the priest whose autocratic stubbornness made him nearly impossible to work with. The only assistant who remained with him for more than a few months was Joseph Dutton, a Civil War penitent. We can only assume he got the penance he sought at Molokai and then some. And I’m not talking about the lepers.

Long before he contracted leprosy himself, Damien referred to “we lepers” in his homilies and conversations. His willingness to unabashedly love and serve the Hawaiians, and to share their cross spiritually even before he shared it physically, endeared him to them and opened their hearts to the faith. It is estimated that nearly 75% of the population of the island ultimately became Catholic under Father Damien’s tenure.

Damien is one of the few Catholic saints to hold a place of high honor in the United States; the people of Hawaii venerate him so much that when asked to place statues of two individuals in the Rotunda to represent their state, they chose the first Hawaian chieftain and Father Damien. Each day on May 10—the day Damien set foot on Molokai for the first time—there are celebrations around Hawaii to honor him. A statue of Father Damien also graces the entrance to the Hawaiian State Capital and Hawaiian State Legislature in Honolulu. The state celebrates “Father Damien Day” every year on his birthday (April 15), in which the statue in Honolulu is ceremoniously draped in lei followed by songs and prayers. Understandably, Hawaiians–Catholic and non-Catholic alike–were proud of their adopted son when he was canonized in 2009.

Father Damien became a saint the old-fashioned way: perseverance and hard work. May God give us all the grace to persevere in love as he did. Saint Damien, pray for us!

5 Replies to “My Two Damiens”