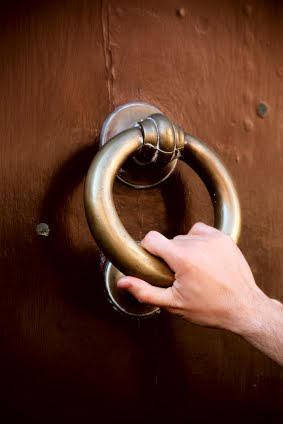 I think God’s telling me something…and He’s speaking primarily through religious groups that self-identify as Christian. I live next door to a Mormon ward, but I rarely think about them, theologically speaking. Separate from their theology, I believe they are good, well-meaning people. But, I know the alarming statistics that 50% of Mormon converts are lapsed Catholics and that the Mormon church is “the first new major world religion since Islam” according to Rodney Stark, who predicted this in 1984. In fact, from 1984 to 2000, the church actually grew at an average rate of 52% per decade, outpacing the upper bound on Stark’s prediction. Their recruiting campaign is aggressive, to say the least.

Lately, God likes to speak to me in “threes.” Three separate and distinct events led me to believe that I need to learn more of what Mormonism teaches with respect to the Catholic Church, so that I can better arm myself when approached. Currently, I relate what little I know to their claim that a supposed “apostasy” happened upon the death of the last Apostle. Since my arguments tend towards simplistic reasoning, I go more broad in my arguments, rather than getting into what I call “Scripture wars” with non-Catholic Christians. In other words, I rely on the basic message that the Catholic Church teaches rather than try to go “toe-to-toe” with other denominations. The Church does not serve two masters, meaning we stand firm on the foundation given to us by Christ, so there is no need for us to define ourselves against anyone whose beliefs do not match up with ours. We do not even define ourselves against Judaism because they are part and parcel to our identity, our heritage, our belief. Non-Catholic Christians, and even religious sects such as Mormonism or Jehovah’s Witness, have to define themselves against someone or something in order to validate their beliefs, thus my own personal strong conviction that they serve two masters, whether knowingly or unknowingly.

So, in the past two weeks, three separate events overlapped, all convincing me to pursue more study on why Mormons focus so hard on some supposed apostasy when, out of nowhere, there was a knock on the door. In the past, I have missed these “calls to evangelization” because my kids don’t answer the door and my husband doesn’t have the time, energy, or patience to deal with their claims. Having been initially immersed into apologetics before moving into evangelization over the past decade, I am giddy like a little kid at the rare opportunities I get when these “recruiters” come to my door.

My oldest came to me in the kitchen and said, “I think there’s a Mormon at the door.” Poor girl. I nearly trampled over her to get to the front door, all the while quietly redirecting the kids away from the door and instructing them to not bother me while I had my conversation. Deep breath, I adjusted my jacket {it was chilly in the house} and opened the door. It was an older man with a very gentle smile and the standard “tools of evangelization” behind him on the ground. He wasn’t wearing the typical black and white that the Mormons wear, so I guessed he was Jehovah’s Witness and a few minutes later he confirmed when I asked. He asked if he could share some Scripture with me, to which I replied, “SURE! Let me just grab my Bible and I’ll be right back!” I grabbed my Revised Standard Version – Catholic Edition and he told me to flip to 2Tim3:16 and read it. I did.

“All Scripture is inspired by God and profitable for teaching, for reproof, for correction, and for training in righteousness.”

He asked me if I wanted a brochure and I immediately told him exactly what kind of bear trap he’d stepped into.

“Sir,” I said, “I…my family? We are practicing Catholics and we fully understand what our Faith means to us. In fact, you may have seen my church. It’s the MONSTROUS one off the interstate? You know where yada, yada, yada is and intersects with a, b, c.” I didn’t stop there. I continued, attempting to muscle rank, perhaps. “I actually serve on our pastoral council as the chairperson and serve very closely with our priests to make sure we are meeting the needs of our OVER 20K parishioners. I also helped with our adult faith formation program and evangelization is like my bread and butter. I appreciate your efforts and I know God will bless you for trying to do His work, but there isn’t anything you could say to sway me from my faith. In fact, you should stop by my church sometime or you are welcome to come back to my house with any questions you have about Catholicism. It’s kinda my *thing*.”

“I am guessing you are ::insert quizzical look and slight forward tilt of head:: Jehovah’s Witness?”

“Yes, I am aware of some of what you believe. I have some relatives who fell away from the Faith and became JW.”

“What do you mean when you say ‘they fell away from the Faith,'” he asked.

::delicious wringing of hands in anticipation of where this could go::

“Well, you don’t just *stop* being Catholic if you leave the Church,” I say. “People who are fully initiated, meaning they have received all the sacraments of initiation, are Catholic for life, whether they practice or not. You just can’t undo what the Holy Spirit did.”

“Sure,” I say. “Your kingdom is an everlasting kingdom, and your dominion endures throughout all generations.”

“What does kingdom mean to you?” he asks. I say, “I’m not sure what you mean. What do you think it means?” I shoot back, sincerely.

He grabs a little black book from his “evangelization toolbox” and proceeds to tell me this book explains what Scripture is saying about the word “kingdom.” I listen patiently for him to give me his explanation and then wait for the predictable tag question of “don’t you agree?”

I bring out both barrels and ask for the Holy Spirit’s help in what I’m about to say.

So, after he asked me if I agreed, I had to take him back to square one. 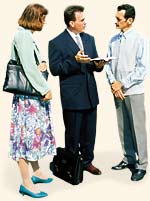 I said, “Actually, I have to take issue with this book. How can you be certain that this interpretation is absolutely, 100% divinely inspired, and therefore 100% correct? You can’t. See, here’s why Catholics believe differently than you. We believe that Christ gave Peter the keys and spoke the Truth when He promised that the gates of hell would never prevail. See, we don’t think Christ was crazy or a liar, we believe He was exactly who He said He was, and, therefore, there was no apostasy. Christ preserved His Bride, our Church, through His promise and the tools and people who would always protect Her through the Magesterium and guided by the Holy Spirit. Individual interpretation of Scripture has always been a self-imposed burden placed on the shoulders of men by…men. So, I guess my question for you would be, ‘What authority did the person who came up with that interpretation of “kingdom” have?’ It would seem no more than authority I could give to myself, you know? The same goes with the countless Christian denominations out there, all claiming that the Holy Spirit is guiding them. We all know that the Holy Spirit would not lead people in different directions. Truth canNOT contradict Truth.”

About this time, the cohort comes up the walk slowly as the gentleman tries yet again to convince me of his Scripture interpretation. We’ve officially locked horns. I am confident in what Christ left His Church. He is convinced of his convictions. I offer again to share what I know about the Catholic Church to him anytime, wish him well and shut the door. You know? He never gave me a pamphlet. ::sad face::

I walked away from the conversation thinking about the ONE thing he stumped me on…that I didn’t share above. And he only stumped me on it because I brought it up and then drew a blank. He asked me what the Catholic Church teaches about God and His name. Odd question, I remember thinking. I thought of the most compact, succinct, non-theologically trippy topic I could and said, “we teach the Good News about Jesus Christ through the Kerygma {κηρύσσω}“…and then promptly forgot what the Kerygma teaches. Stupid brain. I remembered enough to tell him it came from the Catacombs and comes directly from Jesus through the New Testament. I told him to google “kerygma and Catholic” and it would pull it up.

EPIC FAIL on my part, yo.

I immediately went to my bookshelf in the office where I have my stash of apologetics books and grabbed the 2.5 version on How to Answer Jehovah’s Witnesses. Because my focus had been on Mormons the past couple of weeks, I had forgotten the specifics of why Jehovah’s Witnesses are not considered Christian. Not that it really mattered. I can hold my own in a conversation because I rely on what the Catholic Church teaches and ultimately that’s all that matters, but for the sake of curiosity, I thumbed through the book. It brought back to mind what I had forgotten. I’ve taken classes to learn the holes in their theology, but I’m a little rusty. Here is a quick guide for you if you find JW at your door one day.

JW will attempt to:

The best any Catholic can hope to do in this situation is to not focus on the precise intricacies of their door-to-door presentations, their muddied up translation of the King James Version Bible or the continuing revelation and their nonstop end time “prediction addictions,” but rather focus on what you know the Catholic Church teaches. Have faith in what God has given us through the Church and that will sustain any argument to shed light on what the Truth Faith is.

It’s nice and helpful to know what they believe, but it’s not paramount to plant seeds.

I want to leave you with one last thought {please don’t run away!!}. I know many seem incredibly offended when it is pointed out that these religious sects are not Christian, but consider this analogy. Let’s say I tell everyone I am vegan, but it is well-known that I eat steak, chicken, fish, and all animal by-products. You point out the hypocrisy and hope that I am just incredibly ignorant. My reaction is, “How dare you tell me I’m not a vegan, why would you think that? Of COURSE I’m a vegan!!” If you’re normal, you would just stare at me like I was utterly lost {and maybe a few choice words to show your disdain}. With Christianity, there is ONE fundamental definition. If I choose to reject even part of what it means to be Christian, I am, by my own admission, deciding not to identify myself as a Christian any longer. It does not make sense for me to force everyone else to stuff my flawed definition into the universally and historically accepted definition of Christianity. That is intellectually dishonest. If one iota was the difference between heresy and orthodoxy centuries ago, then we have to be very wary of groups that change and flip Dogma and Doctrine with no more authority than you or I have. We have to be strong enough to stand up and say “this is not Christian” while remaining charitable. The only way to do this is for Catholics to become strong in their own faith and then go out and evangelize with the same kind of passion these religious sects do.

Have you evangelized to JW’s or Mormons? What did you say? Were you charitable? What would you do differently next time?