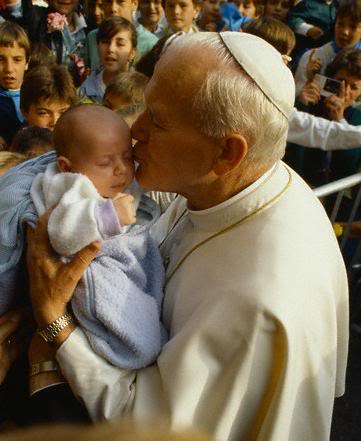 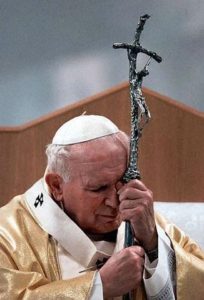 Whenever we attend Mass at Holy Family Cathedral in Anchorage, it’s impossible to miss the happy news that (now) St. John Paul II visited this very place and prayed in front of the Tabernacle. A large metal plaque on the exterior commemorates this event, but my favorite display is a small, framed photo of the back of him praying on a kneeler in front of the Blessed Sacrament. The frame is covered with the smudges of all who have in some way kissed or acknowledged this saint among us.

Anchorage is a tiny community. In spite of its vast physical size, even the vast state of Alaska as a community is small; it’s not uncommon to run into people or hear of those you know who may live hundreds of miles away. When something happens here out of the ordinary, it’s a big deal. Most of the time, “big news” is a new store that took the plunge and opened here or a restaurant that we quite literally pine away for in this isolated place. The wait for the new…wait for it…Olive Garden a couple of years ago had lines of people waiting more than three hours for a table when it first opened. I’m sure there were a few cardiac arrests when Target opened up.

So I can only imagine the excitement when it became known that then-Pope John Paul II was planning to stop in Alaska in 1981. In a state with a little more than 400,000 residents at the time, more than 100,000 people greeted him in person. It’s an excitement we still share.

This little gem appeared on msnbc.com on April 19, 2005 in a collection called “Exceptional Encounters with the Pope.”

Dog Sledding with the Pope

When the Pope came to Anchorage in 1981, I decided what a better way for him to get a real sense of Alaska than to give him a ride with my sled dogs! Plans were all set to drive him on our Park Strip where he was going to be meeting with the people of Anchorage. But because of security concerns, the ride was shifted to the airport where I was to take him to his plane by dog team. Once he reached the airport, I was to drive him to his plane.

When the pope appeared, I was standing at the back of the dog sled. I had the dog team harnessed and a professional dog driver standing beside each pair of dogs. After I was introduced, I had an idea: “Your holiness, would you like to drive the dogs and let me do the riding?”

He smiled quizzically and looked at the archbishop before answering. The archbishop said, “If Vaughan says its safe, it’s all right with me.”

“What must I do?” his Holiness asked.

“It’s very simple. You stand on the runners and hold these handlebars, and I’ll do the rest. You just ride along to the plane.” He stood on the back ready to go. I said, “Your holiness, there’s one thing I feel that I should tell you before we start. Two of my dogs have terrible names and I don’t want to offend you if I have to call out their names.”

He waited for a minute and said, “What are their names?”

“One is Satan and the other is Devil.”

He thought a few seconds, and then he smiled. “No, don’t take them out — just as long as I’m doing the driving.”

It was a rare privilege for me and I’m blessed to have had the opportunity. —Norman Vaughan