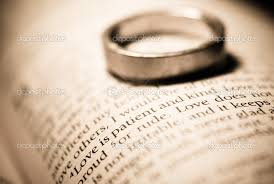 Last weekend, my husband and I attended the wedding of one of his friends from college. It was not a Catholic wedding, but the couple is Christian and their big day reflected that. They had a church ceremony with several Scripture readings, and made traditional Christian vows. At the reception, a minister gave a blessing and added a few short words of wisdom for the newlyweds. He said, “It’s easy to marry the one you love, but it’s not always easy to love the one you marry.” And then he handed over the mic, without expounding. I found myself smiling in understanding and agreement. But several of the people at our table looked at each other in puzzlement and said “What? What is that supposed to mean?” They were all unmarried, and thus have no first-hand experience of the truth of the minister’s words, but it was still surprising to me that they were so confused by them.

Too often in secular society, “love” is thought to be simply an emotion; it’s affection, and desire; and it’s not supposed to be difficult. There is a notion that you shouldn’t really have to work at love. When people no longer feel love, they start to think that maybe their relationship isn’t right after all. This obviously is not what the minister was referring to when he used the word “love.” He was talking about the Christian understanding of love, which is something you do, not something you feel. Love is putting someone else before yourself, even to the point of being willing to lay your life down for them. The ever-popular reading from 1 Corinthians 13, which was a theme throughout this particular wedding (it was quoted on the invitation, incorporated into the church decorations, and read from the pulpit), tells the attributes of true love:

In light of this reading, the minister’s words could be restated like this:

It’s not always easy to be patient with the one you marry.

It’s not always easy to be kind to the one you marry.

It’s not always easy to trust the one you marry..

It’s not always easy to humble yourself before the one you marry.

It’s not always easy to be polite to the one you marry.

It’s not always easy to be self-sacrificing for the one you marry.

It’s not always easy to be slow-to-anger with the one you marry.

It’s not always easy to be forgiving of the one you marry.

It’s not always easy to resist taking pleasure in the wrongdoing of the one you marry.

(This last one might be a little confusing – why would anyone take pleasure in their spouse’s wrongdoing? I think of it in two ways. It can mean being self-satisfied when your spouse makes a mistake because it vindicates all your negative feelings and accusations; or it can mean enjoying a perceived benefit of a sin that your spouse is engaged in).

When explained that way, I hope it would become obvious why it’s not always easy to love the one you marry. I hope that even people with a mistaken notion of love realize that being patient, being kind, being trusting, etc—and above all, putting another person before yourself—are all difficult at times, even when you have deep affection and desire for a person. After all, marriage is always the joining of two imperfect human beings, regardless of how “in love” those two human beings are. My husband and I celebrated our eighth wedding anniversary on Tuesday and I can attest to the fact that even a deep emotion of love does not make it easy to treat another person perfectly. In fact, sometimes we treat people the worst when we love them (in the emotional sense) the most, because we believe that they will keep loving us even if we show them the darkest aspects of our character. At times, I’ve struggled with every one of the above aspects of love – some more than others. Of all of them, I think I struggle most with patience and humility (this goes for interacting with my children as well).

Truthfully I’m not sure if the people seated with us at the reception did not understand the minister’s meaning, or if they just thought it was a

strange thing to say to newlyweds – a negative message on a happy day. I don’t see it as a message that should be hidden from the starry-eyed bride and groom, though. I think it’s a crucial piece of knowledge with which to enter marriage. At my own wedding, our priest Fr. Leo Patalinghug (yes, of Grace Before Meals fame; and yes, I am name-dropping) said in his homily that there are three “rings” of marriage – the engagement ring, the wedding ring, and the “suffer-ring.” He held up a crucifix (which he blessed and gave to us, and which has been hanging above our bed for eight years), and said that marriage requires laying down your life for your beloved, just as Jesus did. It’s not all sunshine and roses. It’s not easy. True love is bloody and painful at times.

A couple should not start off their life together believing that this is not the case in a “good marriage,” or that somehow their relationship is so special that they will be exempt from that third “ring” of marriage. They need to know that patience, humility, trust, selflessness, etc. are virtues that need to be cultivated in one’s marriage – they don’t just come easily all the time, even when you are “in love.” The rest of the passage from Corinthians, not quoted above, says, “Love bears all things, believes all things, hopes all things, endures all things. Love never fails.” The thing to remember is that while love does not fail, people do. In marriage, you have to expect that you will fail and you have to expect and accept that your spouse will fail (unless of course you are Saint Joseph ;). We are incapable of perfect love.

This is part of why so many marriages end in divorce these days. People go into marriage without fully understanding how difficult it’s going to be, at times, to “love the one you marry.” And they often go into marriage without a full commitment to love even when their spouses are not loving them. Being “in love” (feeling that affection and desire) is not going to carry anyone through a lifelong marriage. The emotion we call love is not the kind of love that “never fails.” Sometimes we don’t feel “in love,” and sometimes it’s not enough to sustain us even if we do feel it. At those times, we must make the conscious decision to choose patience, humility, self-sacrifice, and truth to carry us through.

I know I probably am preaching mostly to the choir here. But, I think we all need the reminder sometimes that real love is hard work. It wasn’t easy for Jesus to spread out his arms on the cross and have nails driven through his hands, and it’s certainly not easy for us mere mortals to imitate him. The good news is that, sacramental marriage affords us an abundance of grace, as do the sacraments of Holy Communion and Confession. When we find ourselves wearing that third “ring” at various times in our marriages, we can, by that grace, survive and thrive.

6 Replies to “It’s Not Always Easy to Love”