It’s Saturday night and I’m at Mass with my two daughters, ages four and almost-two. My husband is not there. He was supposed to meet us at the church but got caught up at work (he’s a police officer). This is my first time taking my kids to Mass completely alone. And I am five months pregnant.

At the beginning of Mass I have a modicum of confidence, or at least some feigned confidence. I think, I can do it by myself. They are just little children, right?

It’s only a few minutes into the Mass when I realize that I need to take them into the daily Mass chapel, which functions as a “cry room” during weekend Masses (there is only a glass wall that separates it from the main church so people can still participate in the Mass). My younger daughter has been talking incessantly in a normal voice rather than a whisper, which of course sounds like shouting when you are in a relatively quiet church. And she’s been scurrying down the mostly-empty pew away from me. My older one will not sit still, either. So, out we go.

I think, this will be better. I won’t let them run wild, but I won’t have to worry so much about every little peep and movement being a distraction to those around me. Shortly after we sit down, an older mother sitting behind me with her tweenage daughter gets up and leaves. Of course, I think this is because of me and my unruly children (but I really have no idea if that is the real reason). Oh well, the cry room isn’t really for her and her tween anyway, right? But for some reason it stings—a lot—to think this mother was annoyed with my children, in the cry room of all places. 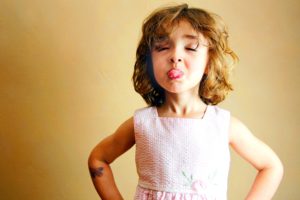 I try to pay attention to the Mass, while also trying to keep my children relatively well-behaved. It’s not going well, and the minutes are ticking by at the slowest imaginable pace.  I think, I can’t do this, and wonder how I’m going to make it through the rest of the Mass. What follows is 30 minutes of me struggling with an active toddler who won’t even be still in my arms, and a defiant preschooler who refuses to obey even while I threaten loss of TV privileges! Part of this time is spent in the secluded stairwell, where no one will hear the sound of me being defeated by a four year old. There are tears shed, and they aren’t just the children’s.

We’re back in the cry room for the Consecration. I guess I close my eyes for a brief moment to help me concentrate, because suddenly I am looking up to see my toddler climbing up the back of one of the chairs in front of us, and flipping herself head-first over the other side. I get up to go get her, and I start crying again, in front of everyone in the cry room. I guess I am giving new meaning to the term “cry room”… but then again, I can’t be the first overwhelmed mother to have cried in there, right?

At this point, I stand in the back with the toddler, holding her squirming body tightly in my arms, despite the toll this is taking on my pregnant body. And I continue to cry. I think, I’m a complete failure of a mother (a thought which will not go away for another 24 hours… and is sure to come back).

And then an angel appears next to me.

The teenaged daughter of some friends from church, who saw me through the glass wall of the chapel, comes up to me and asks if I want her to hold my toddler. I hand her over to the teenager without saying a word, and I cry some more. I am touched by the kindness of this young woman, and so relieved to finally have some help. When the toddler decides she’s done being held by this relative stranger, the teenager offers to hold the four year old. And she even takes her with her to Communion. After Mass, she helps me take the kids to the car and get them buckled in their car seats. I hug her and thank her, but I don’t think I could ever communicate how much her help meant to me.

This incident led me to start thinking more about something that has been rattling around in my brain for a while. There is an old adage, “It takes a village to raise a child.” I usually cringe when I hear it, and think instead of that newer saying that goes “I’ve seen the village, and I don’t want it raising my children.” But when I think more deeply, I realize that there is something fundamentally true about that original saying, even though I believe it has been distorted in recent times by people who want to justify things like government intrusion into parental rights. That fundamental truth is that we mothers (and fathers) can’t raise our children alone. It’s not that our children need a hundred different authority figures telling them what to do, or that we parents need a hundred people telling us how to raise them, but that we need helping hands and supportive shoulders in order for us to do our job most effectively.

We need an extra pair of arms at Mass when we are tired, pregnant and trying to wrangle an active toddler and a defiant preschooler. We need someone to listen without condemnation when we are feeling like the biggest failure of a mother, and to remind us that we aren’t failures at all. We need someone to make us a meal when we’ve just given birth or are exhausted from pregnancy. We need someone to remind us, as a friend recently did for me, “Don’t compare yourself to other mothers. You are usually seeing them at their best, whereas you see yourself at your worst.”

Sometimes, too, we do need someone to gently correct our children when our backs are turned and we don’t see them stealing their eighth chocolate chip cookie off the dessert table at a party. We even may need someone to offer us parenting advice (with charity, not condescension) when they see us struggling with Godly parenting.

And all of that is okay! We are not bad parents for needing those things. 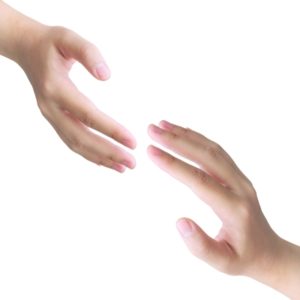 Sadly, though, in the “village” of our society today, there is often more discouragement, criticism, and even competition from other parents than there is encouragement and help. Further, there is more ridiculing of the values that we hold dear as Catholics than there is support in bringing up our children with those values.

Some people would see a harried mom struggling to control her four children in the grocery store, and look on her with disdain for having “so many” children – and unruly ones, at that! It wouldn’t occur to them to offer a kind word or ask if they can help her get her groceries to the car. Some people would listen to a mother express distress at her utter exhaustion from getting up four times a night to nurse a a 14 month old, and simply scoff at her for the fact that she is still breastfeeding a 14 month old, and hasn’t let the baby “cry-it-out” yet. It wouldn’t occur to them to offer  an afternoon of babysitting, or even the comforting words that “this too shall pass.” Some people would see a mother trying to raise her children with traditional Christian values, and purposefully work against her efforts while looking down on her for her “intolerance.” It wouldn’t occur to them that maybe they are the intolerant ones.

I think the picture I’m trying to paint is obvious. It would seem that many people’s idea of the meaning of “it takes a village” is that raising children takes a village-worth of people all criticizing and condemning everyone else’s parenting choices and abilities — based only on appearances, of course. And let’s not forget the village’s need to make sure every child—no more than two per family, please—is being indoctrinated with the same worldview.

Thankfully, through the grace and generosity of God, I have been the recipient of a huge outpouring of encouragement and support during those mothering moments where I’ve needed it the most. I’ve been given many hugs, encouraging words, advice, offers to babysit or play with my children, meals, and listening ears from many different people in my life – some of whom barely know me. I’ve also received plenty of scoffing and criticism. But that doesn’t hurt as badly when you have the positive experiences to balance it out. I hope I can return the kindness I’ve received, or at least pay it forward. So many other mothers are in need of it.

No, we Catholics do not want or need “the village” of modern-day American society to “help” us raise our children. We don’t need the “mommy wars.” We don’t want our children learning values from those who think that abortion is a fundamental right, and that “intolerance” of someone else’s lifestyle is the worst–or the only–sin. We don’t want people (or the government) critically telling us how to parent, or coming between us and our children.

What we do want and need, however, is for the Body of Christ to be that proverbial village. We need our Christian brothers and sisters to support us in having as many children as God blesses us with, to give us the practical help and the encouragement we need to raise them in a way that is pleasing to Him, and perhaps most importantly of all, to pray for us in our vocation as parents. Many in the Church are doing just that. But some are no better than their secular counterparts. And some just do not realize the fact that so many of us young parents (especially those that do not work outside the home) are raising our children in practical isolation, and are often overwhelmed and discouraged. Many of the overwhelmed and discouraged don’t realize how many other parents feel just like they do, partly because we are all too afraid or proud to admit our struggles.

It would be beautiful if we could each make a commitment to open our eyes and reach out to those parents who are in need around us, just as my friend’s teenaged daughter reached out to me. We also each need to be honest with ourselves and others about the fact that we are not perfect parents, and we could use some assistance in our vocations sometimes! If we all were to do that, imagine what kind of “village” we could create, and how wonderful it would be to raise our children there.

*Photo of hands from FreeDigitalPhotos.net.