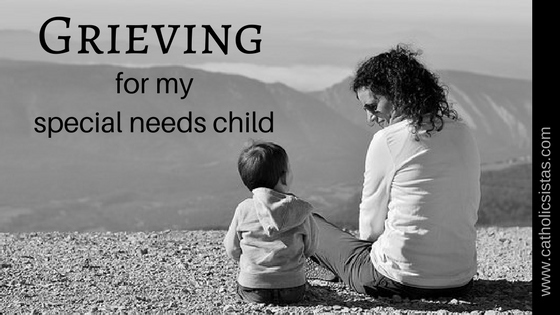 For a while, it has bugged me when a pregnant woman, when asked if she wanted a boy or girl, responded “I don’t care, as long as it’s healthy.” Because I had seen couples welcome babies who were definitely not “healthy”, but of course they still loved their child with all their hearts. So in my self-righteousness, I looked down on those who answered “as long as it’s healthy”. Until I had been a mother myself for several years. My first two children had both been born healthy and “perfect”, and were even relatively easy babies. But then as my son grew, we saw signs of problems. He had a speech delay, which we found was due to a hearing issue (later corrected with ear tubes), but there were other issues which seemed to point towards something more. Over time, it became clear that he is on the Autism spectrum. He’s pretty high-functioning, so while it is sometimes difficult, our lives are still pretty normal. And for a while, this actually increased my self-righteousness, since I had a child who while physically healthy, was not your typically “perfect, healthy child,” yet of course I loved him! I must be so much better than those people who replied that they only wanted a healthy child.

But then I realized that I was not all sunshine and happiness when thinking about my son. I frequently felt sad, stressed, guilty, worried, frustrated, overwhelmed, and so much more. And somehow humility struck me, because I found myself grieving for the loss of some of what I had imagined for my child. I realized I was sad that he was already having great difficulty learning to read and having trouble with his classmates because of his difficulty in social interactions. And I was sad because I knew those difficulties would continue, and others would come. And I realized without even being aware of it that I had imagined my children would be healthy, normal kids and grow into healthy, normal adults. While I was feeling superior to those who voiced the hope for a healthy child, without realizing it I had simply assumed that my own children would be healthy. And it hurt to give up that assumption, to change my image of what my kids would be as teens and young adults and parents themselves. I had to realize that not only would they all face the typical challenges of life, but my son would also face special challenges. And my husband and I would face special challenges in raising him.

And that kinda sucks. 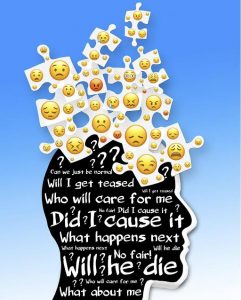 I don’t want to spend time searching for ways to help him navigate a world that sometimes doesn’t make sense to him. I don’t want to deal with Special Ed providers at his school, or with the additional parent-teacher meetings needed to keep track of where he needs extra help, or with the extra time at home helping him. I don’t like having conversations with him where I have to explain basic social reactions when he just doesn’t understand why his classmates react a certain way. I don’t want to be a “special needs mom,” but I am. I wouldn’t choose any of those things, but I do them because I know he needs them, and I’m his mother. I have friends who deal with much greater issues with their children, and I’m willing to bet they don’t want to be a “special needs mom” either. I think any mother would prefer that her child not have to face the big or small challenges that come with having special needs. A mother naturally wants to make the road smooth and easy for her children, to watch them grow and succeed rather than stumble and struggle.

So I’m sad sometimes. I grieve the loss of the image of a normal, healthy life for my son, and I grieve the fact that his extra needs make my job harder. While I certainly love him no less, part of my mind says “I wish he were healthy,” “I wish we didn’t have to fight to get closer to normal,” “this stuff is a pain in the….uh….rear.” And that’s okay. While I still don’t like it, I don’t judge them so harshly when new parents say “as long as the baby is healthy.” And I don’t come down so hard on myself when I am sad that we have to deal with this. It is a loss. A loss of some of my hopes for my child and myself, a loss of our time and effort and energy, a loss of the ability to share my time and attention more evenly among my children. I’m allowed to grieve for the difficulties my son will face. And so are you.

I’d love to hear how having a child with special needs has impacted your family. Have you grieved the loss it includes, as I have found myself doing? Have you felt guilty about that sadness, as I frequently do? Share your stories in the comments section.

9 Replies to “Grieving for my special needs child”