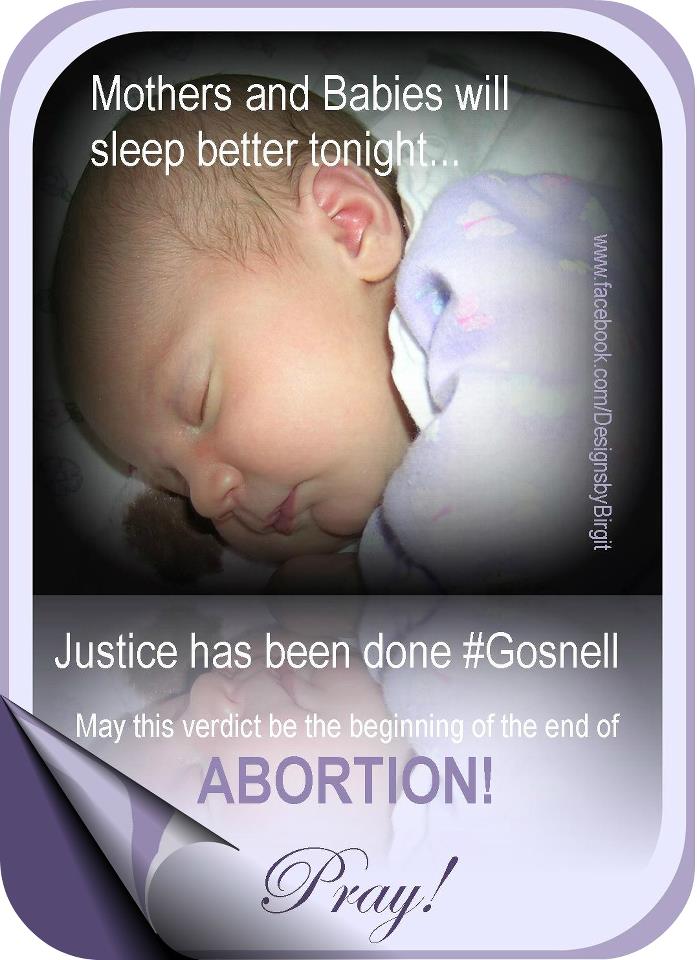 Now is a good time to take a cleansing breath and focus on the impact the Gosnell verdict will have on the pro-life movement. As we are leaping in joy for a conviction, we must keep our wits about us and realize that the same babies, if killed by lethal injection within the womb, would have been legally aborted in clinics all over the country. They still are and will continue to be. The Gosnell saga is just the tip of the horrendous iceberg called ‘choice’ and this one victory should not lull us into complacency. As Rep. Chris Smith aptly phrased it,

“Some abortionists may have cleaner sheets than Gosnell, and better sterilized equipment and better trained accomplices, but what they do – what Gosnell did – kill babies and hurt women – is the same.”

Yes, this one monster has been found guilty of some of the horrific charges against him (3* counts of first degree murder for babies and 1 count of involuntary manslaughter for the woman killed via overdose), but there are many others out there doing exactly the same thing.

Much as Al Capone was brought down by tax evasion charges instead of his criminal activity as a mobster, Gosnell was brought down by a drug related raid. What the authorities found, shocked even seasoned law enforcement. No one in authority had cared about what he had been doing to women and babies in the 15 years since the last inspection of his ‘house of horrors’. They didn’t care that he experimented on unwitting poor women, maiming several of them in what is termed the Mothers Day Massacre. Just like they didn’t care that, across this country, dozens of clinics just like his operate without question every day. No one cared that Planned Parenthood referred women to Gosnell because they couldn’t stomach (or perhaps get away with) late term abortions in such huge numbers and scandalous conditions. 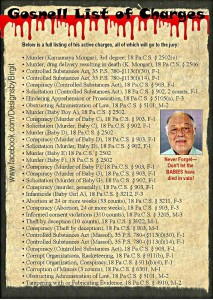 Where is the outcry for all of the numerous women, all over the country, who suffered death at the hands of these butchers legally plying their murderous procedures described simply as medical ‘treatment’? What we have been handed is a gift wrapped opportunity to take the ball and run with it. The Gosnell trial finally gave pro-life advocates a more public voice and forced even the meekest network to at least marginally offer coverage. That a liberal news analyst, Kirsten Powers, deserves our deepest gratitude for finally breaking the story wide open and that Fox News offered some decent coverage would have been highly unlikely just a few weeks ago. Now the proverbial cat is out of the bag and, to mix my metaphors, we must make hay while the sun does shine! Nineteen brave Congressmen who spoke on the House floor,  “See No Evil” (an outstanding Fox News documentary), some other media coverage, #Gosnell Tweetfests, blogging and marathon postings on Facebook have gone a long way in educating more and more people. How shocking, disheartening and surprising to find that there are still many, many good citizens out there who are oblivious to this scandalous affair! When our priest asked for a show of hands of those who knew of Gosnell, only 20% or so of the congregation responded with raised hands.

So, on the feast day of Our Lady of Fatima, we have been granted a wonderful chance to witness for Life. Coupled with the surprise visit of our Holy Father, Pope Francis, in support of tens of thousands of pro-life faithful at the March for Life in Rome yesterday (Mothers Day), we have been blessed with an impressive beginning to the rest of the pro-life journey. What happens next is up to the collective us. Will we rest on our laurels in this partially won victory or will we let this be the catalyst to finally find our voice – a voice of righteous anger and outrage for the atrocities visited upon the innocent, left in our charge by God Almighty? A foot is in the door, so let’s fling it open and throw ourselves into the task of gaining momentum. Let us pray harder, speak louder, love more, and gird up for the ensuing battle. Now is not the time to turn away in horror – not wanting any more reminders. Satan, Planned Parenthood, and liberal media were forced to give us our day in the sun but make no mistake, they will be back with the fury of hell. Let’s be ready. Let’s rise to the occasion. And with God at our side, let’s forever end the most unspeakable act of killing the innocents at the altar of convenience!

.
*Read about the baby that Gosnell was not convicted of killing here.

PS. As a Catholic believer in the unfathomable mercy of God, my hope is that Gosnell is kept in prison for the rest of his natural life. May he find true remorse and forgiveness.