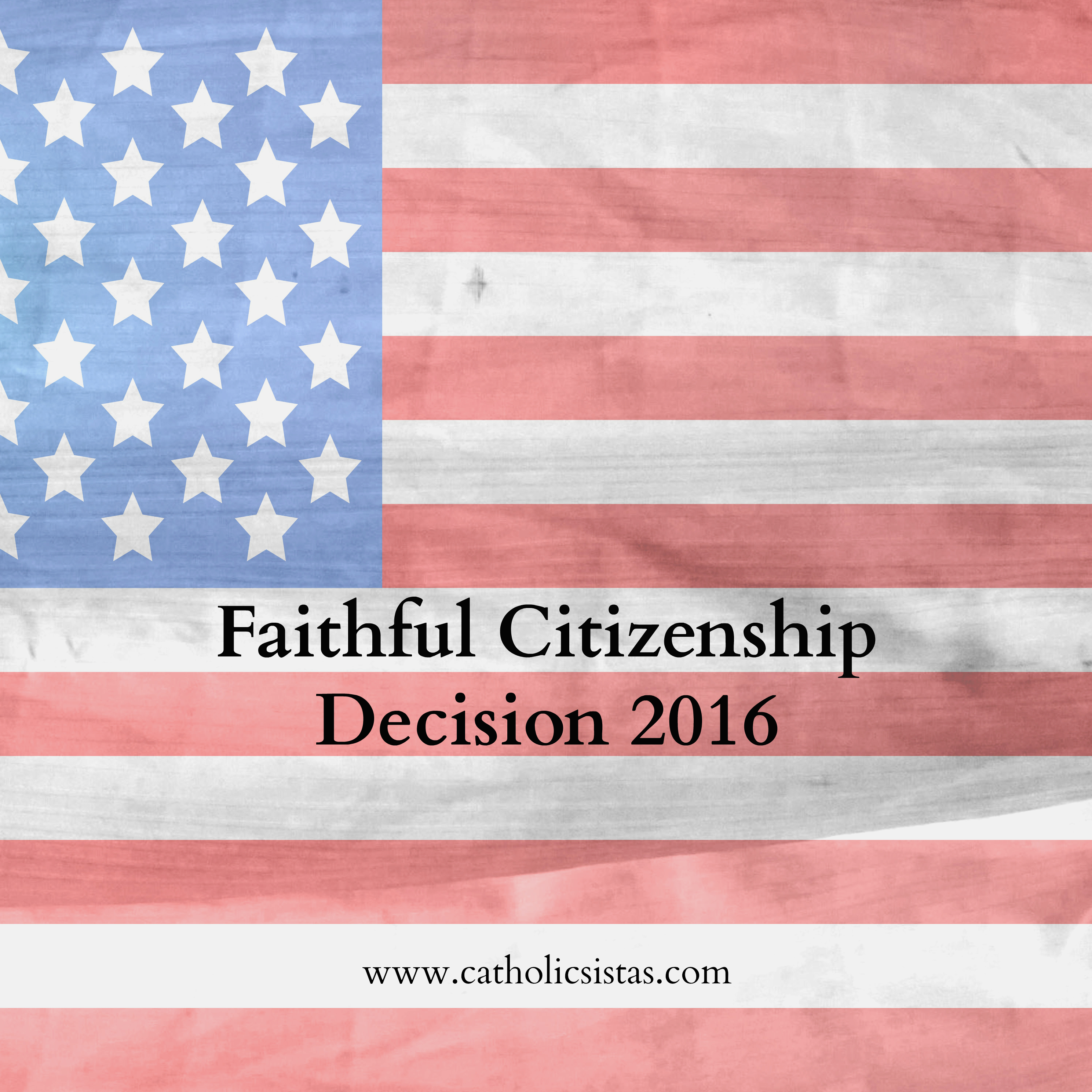 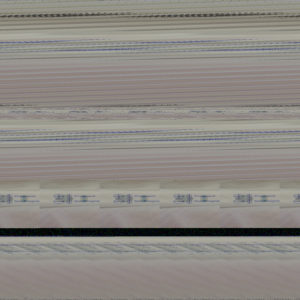 We are approximately 3 weeks away from what is arguably the most intense election cycle our country has ever dealt with. The intensity has cause divisions for some within their families, amongst their friends and within the workplace. I have seen social media bullying and name-calling over candidates and election issues. Many people I know, including many Catholics, and including myself, feel an internal, anxious struggle as we form our conscience surrounding the issues and the candidates. And so before I even touch the subject of faithful citizenship and politics, I ask you to take a moment to quiet your mind, take a deep breath, and pray:

Lord God, as the election approaches,
we seek to better understand the issues and concerns that confront our city, state, and country,
and how the Gospel compels us to respond as faithful citizens in our community.
We ask for eyes that are free from blindness
so that we might see each other as brothers and sisters,
one and equal in dignity,
especially those who are victims of abuse and violence, deceit and poverty.
We ask for ears that will hear the cries of children unborn and those abandoned,
Men and women oppressed because of race or creed, religion or gender.
We ask for minds and hearts that are open to hearing the voice of leaders who will bring us closer to your Kingdom.
We pray for discernment
so that we may choose leaders who hear your Word,
live your love,
and keep in the ways of your truth
as they follow in the steps of Jesus and his Apostles
and guide us to your Kingdom of justice and peace.
We ask this in the name of your Son Jesus Christ and through the power of the Holy Spirit.
Amen.
–Prayer Before An Election, US Conference of Catholic Bishops

Sent Into the World

As Jesus Christ the Son was sent into the world by God the Father, so Christ sends us into the world (John 17:18). Christ has sent us to share God and to love and care for our neighbor. And so in a nation such as the United States, where we are blessed with the opportunity to have a voice in politics, we have a responsibility to live our Catholic faith at all times, including politics.

Living our faith is difficult in many circumstances and situations in our lives, as our sinful human nature causes us to struggle. Yet we find our strength in Christ. We find ourselves nourished by His Church and we become empowered by the sacraments of Eucharist and Reconciliation to form our consciences to be strong Catholics living in the world.

The Catechism of the Catholic Church reminds us that: [The] conscience must be informed and moral judgment enlightened. A well-formed conscience is upright and truthful. It formulates its judgments according to reason, in conformity with the true good willed by the wisdom of the Creator. The education of conscience is indispensable for human beings who are subjected to negative influences and tempted by sin to prefer their own judgment and to reject authoritative teachings” (CCC #1783).

And it is with these well-formed consciences that we are called to make decisions in the world, including in politics. Because when “Faced with a moral choice, conscience can make either a right judgment in accordance with reason and the divine law or, on the contrary, an erroneous judgment that departs from them” (CCC #1786).

To help us form our consciences, the United States Conference of Catholic Bishops revised their 2007 document, Forming Consciences for Faithful Citizenship: A Call to Political Responsibility from the Catholic Bishops of the United States, in November 2015. This 37-page document is meant to assist us in discerning our political decisions as a teaching document on the political responsibility of Catholics in the United States. It is meant not to tell us who to vote for. It is meant to aid us in forming our consciences in accordance with God’s Truth. This document has been updated to include Pope Benedict XVI’s encyclical, Caritas in Veritate, and Pope Francis’ encyclicals, Evangelii Gaudium and Laudato Si’, as well as to address recent domestic and foreign policies such as abortion, physician assisted suicide, the redefinition of marriage, ecological and environmental concerns, deadly attacks on Christians and religious minorities, religious freedom, economic policies, immigration and the refugee crisis and wars, terror and violence.

Sometimes people question if it’s appropriate for the Church to play a role in politics. However, because the Church is obligated to care for Her people, She has an obligation to teach and share moral truths that shape us in our entirety, not just the life we live when we are on parish property. Our entire selves, and at all times.

This mindset carries over into specific political issues, even for Catholics, leading us to give more weight to some political issues over others. Except that as Catholics, we know that this mindset often causes the replacement of Truth with opinion. It becomes personal preferences swayed by our sinful nature instead of allowing ourselves to make morally conscious decisions in accordance with our faith. And as People of God we have “…the right to act in conscience and in freedom so as personally to make moral decisions. ‘He [man] must not be forced to act contrary to his conscience. Nor must he be prevented from acting according to his conscience, especially in religious matters’ ” (CCC #1782).

Politically, we are sometimes confronted with situations in which making a moral decision is difficult, even with a well-formed conscience. The Catechism of the Catholic Church has guidelines to help us in these situations too:

Man is sometimes confronted by situations that make moral judgments less assured and decision
difficult. But he must always seriously seek what is right and good and discern the will of God
expressed in divine law. To this purpose, man strives to interpret the data of experience and the
signs of the times assisted by the virtue of prudence, by the advice of competent people, and by the
help of the Holy Spirit and his gifts. Some rules apply in every case:
—One may never do evil so that good may result from it;
—the Golden Rule: “Whatever you wish that men would do to you, do so to them.”
—charity always proceeds by way of respect for one’s neighbor and his conscience: “Thus
sinning against your brethren and wounding their conscience . . . you sin against Christ.”
Therefore “it is right not to . . . do anything that makes your brother stumble.”
#1787-1789

Aided by the virtue of prudence in the exercise of well-formed consciences, Catholics are called to
make practical judgments regarding good and evil choices in the political arena. There are some
things we must never do, as individuals or as a society, because they are always incompatible
with love of God and neighbor. Such actions are so deeply flawed that they are always opposed to
the authentic good of persons. These are called “intrinsically evil” actions. They must always be
rejected and opposed and must never be supported or condoned… It is a mistake with grave
moral consequences to treat the destruction of innocent human life merely as a matter of
individual choice… The right to life implies and is linked to other human rights—to the basic goods
that every human person needs to live and thrive. All the life issues are connected… St. Pope John
Paul II explained the importance of being true to fundamental Church teachings: ‘Above all, the
common outcry, which is justly made on behalf of human rights— for example, the right to health,
to home, to work, to family, to culture—is false and illusory if the right to life, the most basic and
fundamental right and the condition for all other personal rights, is not defended with maximum
determination’ (Christifideles Laici, no. 38).
#21, 22, 25, 26

Living our faith as Catholics and living in the world are not easy. And as we make our decisions for the November 2016 election, as we are called to do for all things, we must prayerfully discern our voting decisions. And so to close, I ask you to pray daily with me and many others, for all our currently elected officials, candidates for office in November and ballot issues to be voted on.