Do I Really Believe He’s There?

I recently celebrated my 10-year anniversary of becoming Catholic and the event got me to thinking about what it was like to come into the Church as an adult. I grew up in a small southern town, with a Protestant church on every corner, and I was undeniably one of the most naive converts ever to approach the altar. I didn’t even know Catholics were Christians until my mid-20s. Which probably had something to do with the fact that I didn’t know who Christ was, either.

Converting to Catholicism as an adult was like growing up an orphan, with all the loneliness and self-loathing of being unrooted, only to discover I belonged to the royal family. I was overwhelmed by the vast spiritual and intellectual riches of the faith that were handed to me upon baptism. Saints, the sacraments, cathedrals, novenas, the holy angels…it was like a never-ending feast for the soul. I reveled in my faith. Even today, I’m blessed with almost a child’s delight in it.

There was only one thing that tainted becoming Catholic, however: the overwhelming number of people I encountered who wore the label, but who did not believe in most of the Church’s teachings or bother to live by them. Oh, I’m not just talking about contraception or coming to Mass on holy days of obligation. I mean the really important, core teachings, like heaven, hell, the Bible. I was naive enough to be shocked when I heard lifelong Catholics casually dismiss going to Mass or confession. I was bewildered that so many of my spiritual siblings, who were blessed with being born into the family home instead of having to yearn and search for it as I had, seemed oblivious to the priceless value of their Catholic faith and heritage.

I’d had the idea that once we converted, it wouldn’t matter that our families didn’t support us in our faith journey, because we’d have the spiritual support we’d need among our fellow parishioners. But that was not what I found. I found the same hostility to faith within the Church itself that I did in the world–in some cases, stronger than what I encountered among non-Catholics. In time, I realized that there were Catholics worshiping with us who also practice their faith. And that there is one simple litmus test to tell who these people are: 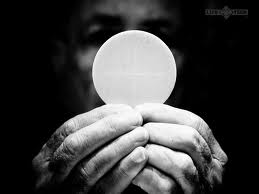 It didn’t take long for me to discover there are two kinds of Catholics in our Church:

1) those who think the little wafer they ingest at the end of Mass is a piece of bread, and

When my husband and I were going through RCIA, our priest explained the Eucharist to us and said, “It’s either the biggest hoax in history that’s been perpetrated on billions of people for nearly 2,000 years–or it’s the truth.” It made me realize then that there is no middle ground; I had to accept on faith that what looks like a piece of bread to me is, in reality, a person: Jesus himself, fully human and fully divine. I had investigated the major world religions on my way to Catholicism because I wanted to find the Truth and I knew that if I ever found it, I wanted to live with integrity. I knew I could not call myself a Catholic if I was not willing to submit my will to the most fundamental, core teaching of the faith: that the Eucharist really and truly is Jesus. Not just a symbol of Jesus. Or even a really meaningful memorial of Him. But really and truly Jesus of Nazareth, the God-man who was born of a virgin, died on a cross, and rose from the dead 2,000 years ago.

My belief that Jesus is really there in that host fuels everything I do as a Catholic. I show up to Mass every weekend because I don’t want to miss the privilege of communing with Him. I go to Confession because I want my soul to be a welcoming abode for Him, who is perfect. I pray because He is part of me. I use NFP because I respect His gift of fertility, through which I’ve cooperated with God in the creation of five new, immortal souls. Everything, from genuflecting before the tabernacle to sacrificing for my friends and family, is  rooted first in my relationship with Jesus, who comes to me under the guise of bread.

This teaching is foundational; I’ve found that a person who doesn’t believe in the Real Presence rarely believes much else the Church teaches, either. It just makes sense–if you don’t believe the Church is telling the truth about the Eucharist, then how can you trust that anything it teaches is true? If it’s wrong about Communion, then maybe it’s wrong about heaven and hell and all the rest. Maybe its wrong about God loving us or existing at all.

It cuts both ways, too: if you do believe the Church is right about the Eucharist, and Jesus is really and truly present, then why doesn’t the Church have the authority to guide you in ALL parts of your life? To me, it seems irrational–not to mention self-serving–to believe God gives the Catholic Church the power to turn a piece of bread into the Son of God, but that its guidance on moral matters is suspect. If you can take the monumental leap of faith that a piece of bread is really a person, then the rest ought to be cake.

Today is Holy Thursday, the day we memorialize Jesus giving us His Body, Blood, Soul, and Divinity in the Eucharist. This truth about the Eucharist–that Jesus is present to us under the appearance of bread, so that He can commune with us most intimately–is the core of our Catholic faith. This Sunday, as you move toward the altar, there is only one question that ought to consume your soul: “Do I really believe He’s there?” After all that Jesus did to redeem us, He deserves a straight answer.