Confessions of an Alleged Mary Worshiper

If you’ve ever heard anything negative about Catholics, you’ve probably heard that we worship Mary above God. That goes hand-in-hand with the accusation of Catholics being non-Christians. I could repeat the commonly cited Scriptures, Doctrine, Dogma, etc. that refute these accusations, but I won’t bore you with endless examples or refutations. For instance, one thing that unifies all Christians is acceptance of the Apostles’ Creed. Catholics are no exception to this (although we recite the related Nicene Creed during Mass). While Mary is definitely mentioned in both the Apostles’ and Nicene Creeds, she doesn’t take pre-eminence over God the Father, Jesus, and the Holy Spirit… Oops, I said I wasn’t going to bore you with proofs. 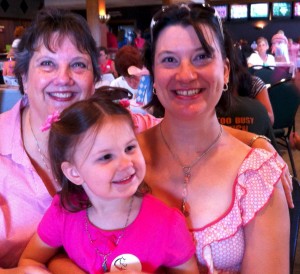 As an alleged Mary-worshipper, I must confess that, while I fully acknowledge Mary’s most holy and blessed  place among man-kind, I’ve never really been one to have a special devotion to her. I’ve tried throughout my 31 years to renew and encourage my devotion to our Blessed Mother. I own countless Rosaries (including my Travel Rosary), miraculous medals, and researched and blogged about all the Mysteries of the Rosary during the entire season of Lent 2011. Yet, I can’t quite grasp running (metaphorically speaking) to my heavenly Blessed Mother when I have a strong, spiritual, earthly mother (literally speaking) who is always there when I need her.

Even with this worldly attachment, my mother would most likely tell you that I run to her far less often than she wishes. Maybe it’s my German heritage or the long line of strong women in my family. Maybe it’s that I have a difficulty identifying my sinful self with the perfection of Mary. Perhaps I’m too hard on myself, but I can’t shake my lingering feelings of inadequacy. Yet, in an effort to devote myself to her, I chose Mary as my Confirmation name. I did research on Mary’s life and tried to emulate her. However, I continually found myself unfavorably measuring up to her.
.
You see, if I were to pick a holy woman from among the countless female Saints I’d be more likely to choose St. Mary Magdelene. According to some stories, Mary Magdelene was the prostitute that washed Jesus’ feet with her tears then anointed them with perfumed oils. St. Mary Magdelene knew what it was like to really mess up! While the Blessed Mother is responsible for bringing Salvation into the world, Mary Magdelene recognized Him for what He is and turned from her previous ways (even if she wasn’t the prostitute). If male Saints were in the running, I’d also find similar characteristics with St. Augustine. His mother spent years and years praying for his conversion (along with his father’s), but he continued his willful sinful ways until quite late in his life. Yet, he is known as one of the Doctors of the Church for his Confessions and other works.
.

My imperfections are so vast that I can’t imagine being perfect as Mary was. Yes, I know my God loves me as I am, although He truly wishes I were capable of the perfection of His Most Holy Vessel. Sadly, I’m nowhere near perfect. I am too conscious of my failings to see myself as her child, much less the same kind of mother. Some Catholic friends of mine and I have jokingly wondered if Mary ever had cause to rebuke Jesus for making a mess in their house or having an accident in His pants during potty training. Due to the perfection of the Holy Family (I include Joseph in that because God undoubtably picked the most righteous man to father Jesus on earth), I can’t fathom mundane household difficulties causing bickering and whining as they do in my household. Yet, other saintly households, like St. Monica’s (mother of previously mentioned St. Augustine), were probably guilty of household strifes, even as family members walked the path set for them by God.
.
While I fully understand the beauty of emulating the Holy Family, my human nature makes me cringe every time I realize I’m completely failing to do so. I strive to selflessly say “Yes” to God’s call for me, but there are so many times that my “yes” is either tempered (and weakened) by rationalizations or becomes an outright “no” due to my selfish human nature. I openly admire Mary’s ability to selflessly concede to God’s will, but sometimes wonder if, in her perfection, she ever thought of saying “no”. Therefore, when I am truly struggling with fully becoming a handmaiden of the Lord, I don’t immediately think of Mary. I think of the holy men and women that struggled as I do with their imperfections, but still managed to succeed in answering God’s call. As I grow in my Faith-life, I find myself turning to different members of the Church Triumphant, but not typically Mary. That’s why it is especially ludicrous for me to be an alleged Mary worshipper.