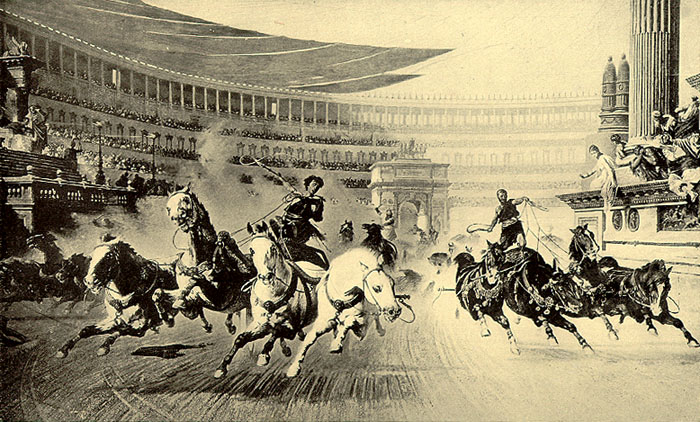 Perhaps the most common and dreaded cliché about history is that those who don’t know it are condemned to repeat it. Human nature, being that it has not changed since the fall, would have us immediately place ourselves in the camp that knows history and thus will not contribute to its repetition. Automatically, most of us, or at least some of us, will assume this is a negative cliché and, full of pride and a bit of arrogance, will tell ourselves that we know better and there is no way the horrors of the past will happen again. Egypt’s Pharaoh, Rome’s Caligula, Mexico’s Aztecs, Germany’s Hitler…Not in our lifetime, no way! We convince ourselves that in this day and age, where the information superhighway contributes to the education of millions and exposes injustice on real time, there is nothing that will get past the scrutiny of the jury of the people. In our minds, at this point in time, history has ceased to be cyclical; it no longer moves in circles, like the chariot races of the Roman Empire. Now, with all our knowledge and vision, we think history has finally become a straight line, a ray pointing forward towards blissfully enlightened, progressive times. But it hasn’t, and it won’t, not ever.

Lately, the strong, progressive, liberal push for all things sexual, homosexual, feminist, atheist and/or socialist is being presented as something new or ground-breaking , has come to the attention of even those like me, a simple stay at home mom. The persistent disdain for tradition, Christianity, modesty, specificity of gender roles, is growing fast and has a ferocious and violent appetite. What in other times has been called anarchy or socialism or fascism or communism, is now disguised behind purposeful misinformation, word manipulation, and coupled with mass under-education. The propaganda lulls the crowds and convinces them of the need to move our society FORWARD in the areas of sexuality, secularism and feminism, when in reality we are witnessing a massive REGRESSION. This race to legalize same sex unions, to mark women’s success at the expense of men, to take God out of His creation is actually sending society back to some of the most violent and chaotic times in history.

We are currently facing a movement whose agenda craves destruction, humiliation and extermination at the same time it cries out for tolerance, freedom and respect. It is contradictory in every aspect of its implementation. It creates confusion, disenchantment, hopelessness and finally, minds ready for the taking. We are battling a generation raised on Nike and Coca Cola commercials, addicted to instant gratification, impatient, disrespectful and intolerant. A whole demographic that knows very little or nothing about the past, looking only at self and at present, results in a very volatile society with a fragile future. For the first time in American history, we witnessed, in 2008, the election of a president based on brand recognition and slogans. Attractive graphics and catchy phrases put in power the most unlikely candidate to the presidency in the White House: Change, Yes we can. A man without any of the necessary credentials to run our country sits at the helm and we continue, to this day, to pay dearly for it. Even today some would still argue that what happened here in November 2008 is completely different than what happened in Austria when they voted to annex themselves to Hitler’s Germany. Well, I am going to have to disagree. It is very, very similar and it proves that we have yet to find our way out of the never ending cycle of repetitive history. 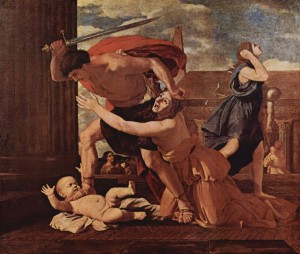 Our current abortion numbers, both national and international, easily exceed any other civilization’s victim toll of sacrificial rituals or attempted genocides. The Egyptians had at least two major ethnic cleansings, as recorded in the bible. When Moses was born, all the new born males were taken from the Jewish people and killed. Then again when Jesus was born, the same thing happened. Aztecs used to sacrifice from one to several thousand at a time in the name of religious balance and peace. The Romans killed Christians for entertainment. The Nazis prided themselves in ridding the world of  Jewish people and anyone who considered them human.  The U.S. of A., with tax money, continues to sacrifice millions of unborn at home for the sake of the individual’s “peace of mind”,  and justifies it with ” bad timing”. We also promote and fund millions more abortions abroad under the guise of wanting to end poverty and advance the women’s liberation movement.

We are no different than those Godless cultures that killed mercilessly for selfish reasons. We, in fact, are so much better at it than they were. We have better resources. We have managed to raise an entire generation to think that silence is irrelevant, when in truth, it is permissive. We have managed to make morals relative, Christianity a thing of the past, and turned God into yet another one of the bad choices that will not be tolerated. Where there once was a common thread of religion in this country; now is a knotted up bunch of strands, tugging and pulling, trying to figure out, where they come from, why they are here, and what is their purpose. Left alone to sort out all the confusion, they become easy targets for the slogans and catchy phrases: Pro-Choice, My Body, Reproductive Rights. It all sounds good and respectful until we look down and see we are walking in a pool of the blood of the innocents. But how many people actually stop to look at anything but themselves? Not many, but hopefully enough.

We are also not the first nation to cry out separation of church and state. We will not be the last. But that is not really what we are doing. We are not crying separation of church and state; we are calling for a separation of Christianity from the state. For the “sake of freedom and equality”, our government steps on Christianity and knowingly makes room for the next church to attach itself to the state. Governments cannot lead societies without a moral compass. There must be a standard, a rule, a guide. Where that guide comes from is, inevitably, the predominant religious belief. The Aztecs conquered many cultures before them and imposed their own religious practices upon them. The Spanish, the English, the Moors, every conquering culture, without fail, has imposed its religious beliefs on the conquered and proceeded to rule according to them. What we are living now is no different. We are just making room for one of the less forgiving religions to fill in the hole left by Christianity’s uprooting.

It is nothing new, it is not good, but it is not new. We are only racing back around the track, one more lap. Back to the times of uncontrolled self-indulgence, or to the times when your birth determined your social status and your potential. Wherever this new lap takes us, it is certainly not a new place, just a new group of people making the same mistakes. So why is it that we insist on running around in circles? It is human nature without the grace of God. It is all the looking inward and taking care of our wants before other’s needs. It is greed, pride, gluttony, sloth, envy, anger and lust. What is left without God is nothing but chaos and death and we are riding our chariots, horses at full gallop, right around the bend. 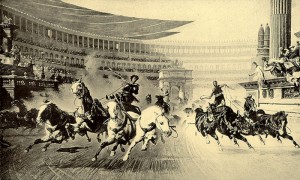 11 Replies to “Chariot Race to Regression”