“Hey hey! Ho ho! Roe v. Wade has got to go!” This catchy chant lodged itself in my brain as I marched down Constitution Avenue last Thursday amid hundreds of thousands of pro-life Americans. As I gazed up at the clear sky, I almost wished it wasn’t such a beautiful day. Although I was grateful for the sunshine, it was accompanied by a slight pang of guilt. Unborn children were being ripped apart, their tiny bodies crushed and then sucked out of their mothers’ wombs, and how was I protesting against this genocide? By taking a walk down the street on a sunny day. “How pathetic!” I thought, beginning to doubt the effectiveness of this approach. 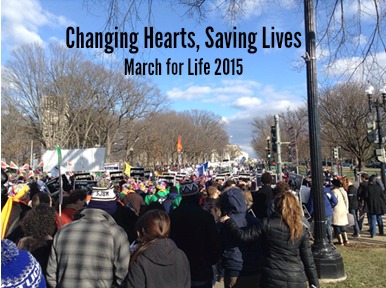 It’s tempting to want to disregard peaceful protests such as the March for Life, an annual event in which pro-life Americans march in protest against the 1973 Roe v. Wade Supreme Court decision, because sometimes they seem fruitless. Year after year, decade after decade, abortion remains legal, and the pro-choice lobby is deceptive and loud. It’s easy to lose hope, forgetting the great strides that have already been made in the pro-life movement. Although we are nowhere near where we need to be as a nation, we are slowly getting there. Since 1973, when the Supreme Court declared unconstitutional any state laws banning abortion, the pro-life presence in America has greatly increased. The results of a Gallup survey conducted in May 2013 showed that 48% of Americans identified themselves as pro-life, while only 45% identified themselves as pro-choice. This may not seem like much of a success for the pro-life movement, but, when compared to a 1996 Gallup survey in which 56% of Americans identified themselves as pro-choice and only 33% identified themselves as pro-life, it is a huge victory. Political strides have also been made, as evidenced by numerous state laws restricting abortions.

However, well-known Catholic speaker and author Chris Stefanick brought up a very important point during the “Life Is VERY Good” rally at the Patriot Center, where thousands of young Catholics gathered for an evening of prayer and worship on the night before the March. He said that in order to end abortion, we must first change people’s hearts. Abortion will not become illegal, he argued, until it becomes unthinkable. And it will only become unthinkable when the inherent dignity and worth of each person is recognized by all. This is only possible if we allow God to pervade our culture; He is the only one who can lift us out of this hopeless pit of self-destruction and set us on the path that leads to true joy and peace. Only through God’s strength will we destroy our nation’s pro-death culture, replacing it with one that welcomes, nurtures and respects human life in all its stages. Only through His wisdom will we put an end to the delusion that it is ever acceptable to stifle the life of a child. Only through His mercy will we show mothers that when they choose life, they ultimately choose peace and fulfillment. Only through His love will we change the hearts of people so afraid of their own worth. And only through His son, Jesus Christ, who is “the Way, the Truth and the Life”, will we abolish abortion, for Christ came so that we “might have life, and have it abundantly.” 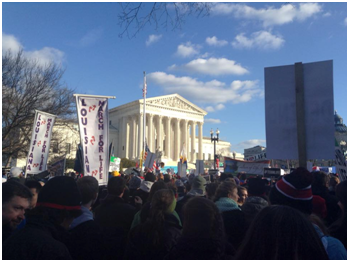 Therefore, the March for Life is anything but fruitless. Although their results are not always immediate, peaceful protests and prayer are the most effective tactics in this battle to save lives. By marching, we witness to Christ’s peaceful, loving determination, and, in doing so, hope to change hearts. 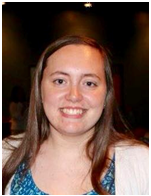 Lizzy Allen is a journalism major at the University of Kentucky. She attends Mary Queen of the Holy Rosary parish in Lexington, KY where she is involved with both the youth group and the music ministry.

« GIVEAWAY & Interview with LiveFitMama Creator, Jaime MahlerSuper Bowl of Disappointment: These are Heroes? »