Today is our 24th wedding anniversary. Allow me to share some of that story with you, Sistas!

We met at the Evangelical Covenant Church of Riverside, RI when I was 19 and Ken was 21. We had both attended this church as teenagers, moved away due to college and military service, then returned. Since I was then commuting locally and Ken’s ship was in port, we were in church together. 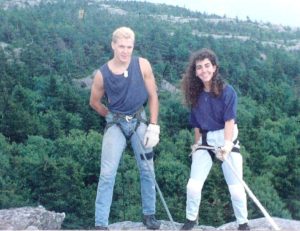 We jumped back into youth activities as helpers, which was a good excuse to continue to hang out with the youth group and our beloved youth pastor and wife. We double-dated (not each other; we each had other dates!) until all the other dates fizzled and it was just us. We poked all around southeastern New England together, from restaurants, beach grills, and concerts to hiking trails, rappelling mountains, and sledding hills. Motorcycle rides, too! For my twentieth birthday, he cooked dinner, complete with candles, music, and rooftop dancing. We had the Serious Relationship Talk. Six months later, he proposed–while we were canoeing, of course. It was tricky to properly cry and laugh and shriek YES! in a tipsy canoe but I somehow managed.

Our wedding was perfect and wholly a gift of our church. One lady made my gown; one gentleman took the photographs; one lady asked me what I wanted for the reception and it magically appeared in the church gymnasium. When we met with the music director and told him we wanted a congregational hymn, All Creatures of Our God and King, he told us that he’d previously written a bridal procession using Lasst uns erfreuen (the tune to that song) and were we were interested in hearing it? It was grand and beautiful and we did indeed use it. 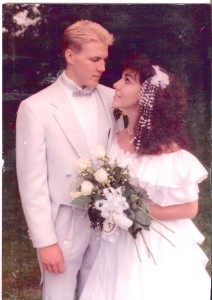 We were told that we were too young, too uneducated, too poor, t00 you-name-it to get married. That we should “see the world” before settling down. But we had no intention of settling down! After our honeymoon weekend on Cape Cod, we took off with $1,500 and our loaded-down Renault across the U.S. and Canada, all the way to Alaska just for fun. (We moved to and from the Last Frontier a few times but that’s another story.). We stopped to visit and hike such places as Mt. Rushmore, the Badlands, Grand Teton, Banff, and Liard Hot Springs. Niagara Falls’ spray completely ruined my makeup. We marveled at the spider web of traffic around Chicago and the endless wheat fields of Saskatchewan. I thought we were going to be poisoned and die from Yellowstone’s mosquitoes. On more than one occasion, Ken had to bungee my backpack onto his because my (whine, whine) shoulders hurt.

So we began our marriage seeing the world and adventuring–together. We continue to see the world and do things a little differently, but always adventurously, and sometimes rebelliously. But always together.

After we were pronounced husband and wife, our pastor of many years had us kneel while he raised his hands over us and prayed these words that I now sing to our children at night:

And He has. For 24 years and hopefully for 24 more and 24 more, according to His pleasure. 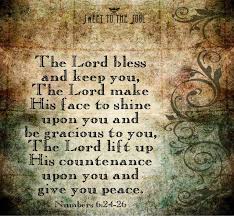