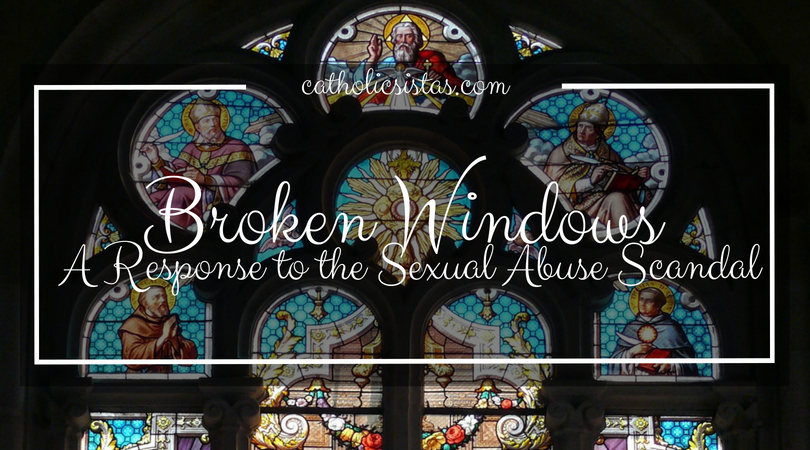 A Small Lantern in a Storm

My heart has been broken.  My mother, the Church, feels as if she’s being ripped apart.  Anger, shame, confusion, disgust, sadness. It’s overwhelming.  And what makes it worse is we keep on being slammed in the face.  Over and over and over again.  I feel like I was just reeling from the last series of these scandals.  Is this really the new norm for our church? It’s so painful to consider.

This past Sunday at Mass, I was given a beautiful insight.  Not an answer to all the hurt, not by far, but something like a small lantern in a storm: a little light to guide me amid all of this darkness.  I offer it to you, sisters, hoping it might bring some courage as we work to remain a people of hope.

I have a childlike wonder for beautiful churches.  Vaulted ceilings; enormous stained glass windows; painted dominions, virtues, and powers set aflight across the altar panel.  I was born and raised in St. Paul, Minnesota, and nothing could quite initiate a craving for beauty quite like the Cathedral of St. Paul.  My husband refers to that catedral as “Catholic Disneyland,” or rather, what Disney would build if tasked with a house of God.  I’ve never found a church that satisfies my hunger like the Cathedral of St. Paul (although I’ve never travelled to Europe, so I still have much to see).

My vocation, wife to an incredible husband who named the Navy his profession, stole me away from that stunning testament to the grandeur of God.  To be honest, not all of the parishes we’ve encountered have been exemplars of beauty (and that’s putting it nicely).  I hate to “parish shop,” but with an attention span as short as mine, I prefer to find myself gazing up at the spiritual art gilding the rafters, rather than critiquing a strange design of the sanctuary space.  (As a bit of a disclaimer, this is all personal preference, and as my husband likes to remind me, it’s the Mass that’s important, not the trimmings).

In all of our moves (I’ve moved four times in a year and a half), I’ve been exposed me to a series of parishes I refer to lovingly as my “coastal churches.”  The Navy puts you right on the coast (obviously), and I have a fondness for the little churches you find right on the beach, or close to it.  They’re little havens for tourists, and nine times out of ten you’ll find a little “St. Mary Star of the Sea” (or some variation), standing sentry like a lighthouse on the water.

You wouldn’t expect it, seeing one of these innocent and precious little churches for the first time, but I’ve found that invariably each of these parishes carries an incredible story.  Each and every coastal church that I’ve encountered carries with it a hurricane story.  Tales of flooding, toppled steeples, fallen walls.

I’ve seen so many historical pictures of how these churches used to look, with beautiful, bold, reverent stained glass windows.  I’ve heard stories of such windows which would gleam, covering the congregation in technicolor during the 9am mass.  Windows special ordered from Tiffany’s, whose greens were emeralds.  Can you imagine, emeralds in the stained glass?

And then it was Hugo.  Camille. Katrina. Harvey.  The waters surged. The winds blew.  Homes were abandoned. Churches were left behind in search of higher ground. And the windows shattered.

I think of our beautiful Church.  That is to say, I think of the beautiful Body of Christ.  I think of the food pantries with which I’ve served.  I think of the college ministry which changed my life and set my heart on fire for the faith.  I think of schools I’ve worked for which are striving to form children’s minds and souls. I think of a boisterous, laughing mother of seven who still found time to serve youth ministry.  I think of a little old widower who volunteered his every hour to his parish. I think of a lector who could barely walk, who struggled to the lecturn to proclaim the Word of God, who gave his every step and his voice to God.  I think of a hardworking young adult professional who gave his two hours of free time a week to train altar servers.  I think of priests and seminarians that I’ve had the blessing to call some of my dearest friends.  I think of sisters who have called me out when my head was up my…well, not where it should of been.

I think of our beautiful Body of Christ, fitted together like a magnificent stained glass window, shining it’s colored light upon the world.  And I think of the hurricanes that have come through, the scandals that have shattered it.

Now, what’s most interesting for me about these coastal churches is how they’ve decided to rebuild after hurricanes.  I’ve seen so many example. One parish did not rebuild, and now stands in ruins. One parish we attended replaced once glorious windows with a simple, less expensive (but less beautiful) design.  One parish raised money and replaced the windows exactly as they were, with an unclear answer as to what they would do if another hurricane struck. One parish simply covered their windows with plaster, leaving an ugly off-white as the first jarring sight.

One parish, however, amazed me.  They were completely wiped out. Not just the windows, the whole church.  The built a strong frame of concrete, able to withstand the force of a hurricane.  And within this strong frame they placed beautiful, inspiring and spiritually-uplifting stained glass windows.  They designed it such that, when (not if) a hurricane came through, they could remove the windows, stowing them in safety until the hurricane had passed.  Once the storm had passed, they could return the windows to their proper place.


Our Time to Rebuild

Sisters, hurricanes in our church are, unfortunately, not an “if.”  It breaks my heart to say so. The Body of Christ both shines with the divinity of our savior, but also bleeds with the vulnerability of our human nature.  We have suffered the effects of this particular hurricane that has gone on for too long.  Every heart is broken, every window is shattered.

I know which path I will strive towards.  I know it will require effort, vigilance, humility, and courage.  I pray to the Holy Spirit that He might guide and sanctify me in this task.  Will you join me, sister?