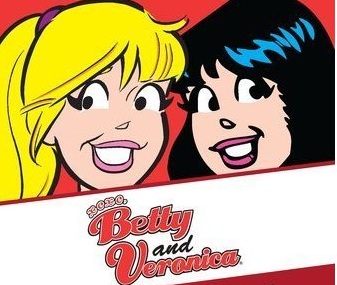 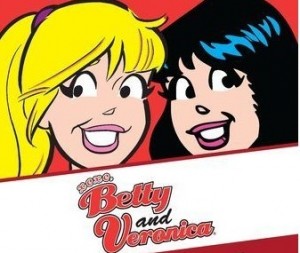 In mainstream culture, this question is presented to us females as: What kind of girl are you?  What kind of girl do you want to be?  Alluding to the Archie comic book, Betty is slightly nerdy, okay-looking, but unassuming and insignificant, but a Veronica is a vixen, stylish, and coveted by men for her good looks.  As women of faith, we adhere to our own allusions.  We strive to be BOTH Betty and Veronica, because two women in the Bible who emulate the best in womanhood are St. Elizabeth (Betty) and St. Veronica (Veronica.)

Elizabeth was Mary’s cousin who is best known as the mother of John the Baptist and the relative with whom Mary visited when she first discovered she was pregnant with our Lord.  Many fine qualities come to mind when thinking about Elizabeth.   She was sensitive enough to realize Mary’s significance and recognized the Lord before He was even born.  This Betty was not insignificant.  She was intuitive and hopeful; she was a good friend to our Blessed Mother, and she was affectionate and accepting.  She took Mary into her home with love and joy, never questioning, simply being present to her.  These are the attributes we look for in a friend.

This Betty was patient; she waited and waited to be blessed with a child and in her old age, she was rewarded– with a son who would come to announce Christ to the world.  She accepted God’s will in her life, just as we should in ours.  Her husband could not speak; this is either a burden or blessing—nevertheless, how often do we get frustrated when our husbands do not speak?  She had to be a patient and loving wife.  She also must have been extremely laid back; her son John was the original “wild child.”  How many of us would aspire for our child to live in the desert wearing burlap and eating bugs?  She let him be who he was meant to be; that is what every loving mother wants for her child, and who he was meant to be was quite significant.  These qualities are important for a woman to have; a good friend, wife, and mother is endowed with intuition, patience, love, and acceptance. 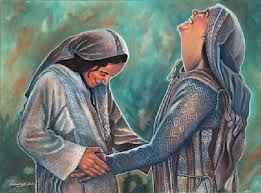 I always admired St. Veronica for many of her qualities. This Veronica was far from stylish.  She is a model of a woman caring enough to be upfront and bold—a paradox in itself.  Conversely, she was gentle and affectionate.  Imagine, if you will, how she caressed our Lord’s face during His suffering.  She saw the menacing guards with weapons, and was not intimidated by them.  She showed care and comfort, but in what those around her probably regarded as an audacious and foolhardy way.  In retrospect, we see her as strong and righteous and valiant.  I aspire to be courageous like Veronica, to have enough of a human side to be upfront and bold enough to show affection and gentleness.

Veronica was unafraid, or maybe she was.  Despite the danger, she acted upon her conviction.  Numerous times in the Bible it is written: be not afraid.  It was the mantra of Blessed John Paul II and the manner in which we are to live our lives as people of faith.  Veronica allowed her compassion for human sufferings supersede her fear and her reverence for the living God give her courage.   We all desire to touch the face of God, and Veronica did it—what an amazing feat. 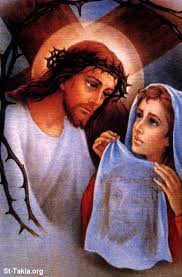 The attributes of womanhood that are held dearest are the qualities that Betty and Veronica represent.  WE are called to be good friends, wives, and mother; we are called to be fearless and compassionate.  When the Betty or Veronica debate arises, sincerely, respond “BOTH.”

2 Replies to “Betty or Veronica?”