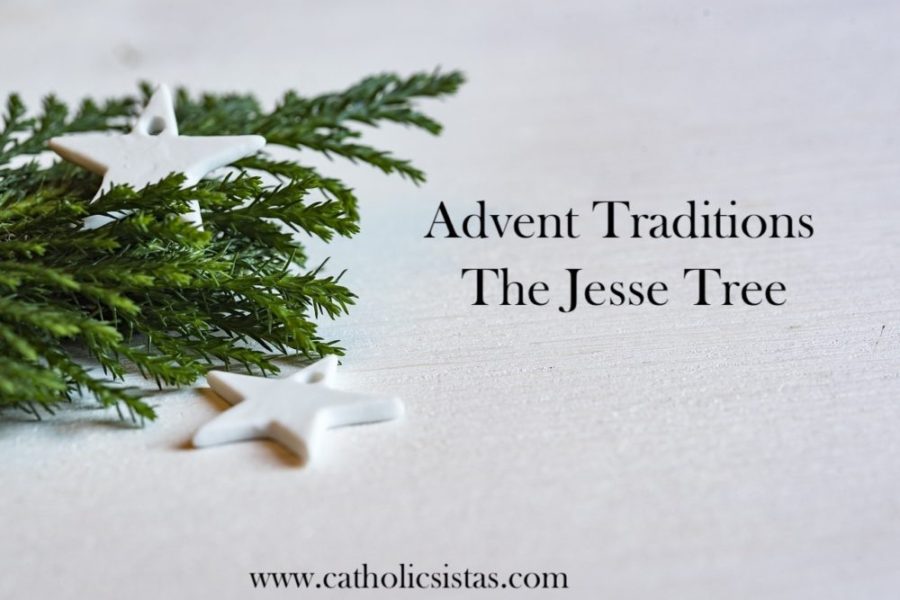 Our parish priest despises the Jesse Tree. Sadly it is for good reason. As a seminarian, the liturgy director absolutely forbid Christmas decorations, music, etc. during Advent. They were allowed a Jesse Tree, a particularly ugly one at that, and that was the extent of their decor for the season. I feel for those poor seminarians. They had to have been homesick, stressed with studying for grueling final exams, and exhausted being at the very end of the term. Christmas and home being just around the corner, and the little joy they might have felt was being sucked right out of them in the name of Advent. No wonder he has a lasting disdain for the Jesse Tree.

Over the 5 years we’ve known him, I’ve been working on changing his negative feelings for the Jesse Tree. In our family it is a well loved tradition which goes hand-in-hand with joyful preparation for the Christmas Season. As with many of our family traditions, our Jesse Tree has evolved over the years. We’ve done everything from making our own sets of ornaments from paper patterns, markers, and copious amounts of glitter glue to using the permanent set of ornaments which I cross-stitched while exhausted, and enormously pregnant with one of our children. We’ve read devotions we found online, stories from the bible, and stories directly from a set of children’s picture books I’ve compiled over the years. For our family, the Jesse Tree is our Advent calendar counting down the days until the Nativity of our Lord and has become a primary source of catechizing our family about the depth and breadth of salvation history.

The tradition of the Jesse Tree has it’s roots in the Middle Ages. Jesse was the father of King David and is often considered the first in the line of the genealogy of Jesus; the root of Jesse. Medieval art, especially stained glass windows of cathedrals, frequently depicted Jesse reclining with a tree emerging from him with Old and New Testament ancestors of Christ depicted in the branches. Over time, Catholics took this idea and the elements from medieval mystery plays about the Fall of Adam and Eve combining and developing into the present day tradition of the Jesse Tree.

This tradition is so simple to incorporate. First you need to figure out how many days of Advent in a given year, as this number does change from year to year (anywhere between 21 and 27 days). This will be the number of ornaments and stories you will need. Beginning on the first day of Advent read the story of creation from the family bible, a children’s bible, or a picture book. After the story have one of the children place the corresponding ornament on the tree. Every day you continue this pattern until you reach Christmas Eve, on which you read the story of the Nativity and hang the last ornament. Easy-peasy.

In our family, we begin with our main Christmas tree decorated only with lights. It makes for a fairly bare tree through most of Advent, but on Gaudete Sunday we fully decorate our tree and then just continue to add Jesse Tree ornaments until Christmas Eve. You might have a separate Jesse Tree, a fully decorated tree, or keep yours bare until Christmas Eve. That is the beauty of this. You can make it your very own tradition.

You might make ornaments, purchase a beautiful set of ornaments, or just tie purple and rose (or any color for that matter) ribbons on your tree to mark each day. One year I purchased white ribbon and a metallic Sharpie and wrote the names from Jesus’ genealogy on the ribbon and used it as a garland. You might do the same with white ribbons and the name of the main character from the story.

The following list is a good representation in chronological order of the stories you might incorporate. You can pick and choose according to the number of days in Advent.

Each of the stories have symbols we associate with each such as an apple for Adam and Eve or a coat of many colors for Joseph. You can design your own ornaments around these symbols, print a free set, or purchase a ready-made set. Catholic Inspired has a free printable set. Bright and Shiny Things has a free printable set of ornaments and a devotional booklet.  If you’d just like to purchase a ready-made set, I love this lovely wood set from JesseTreeTreasures or this sweet hand-made felt set from Baby What Nots, both on Etsy.

If you are feeling especially adventurous and would like to read appropriate and beautiful picture books to accompany your ornaments, Ellie from The Bleeding Pelican has an amazing resource list of books to choose from.

Advent is a season filled with anticipation and preparation for Christmas. While we should embrace the penitential aspects of Advent which call us to conversion and deeper faith, we can also find the beauty and joy in traditions such as the Jesse Tree and the way in which the deep love of our Creator is revealed to us throughout salvation history.