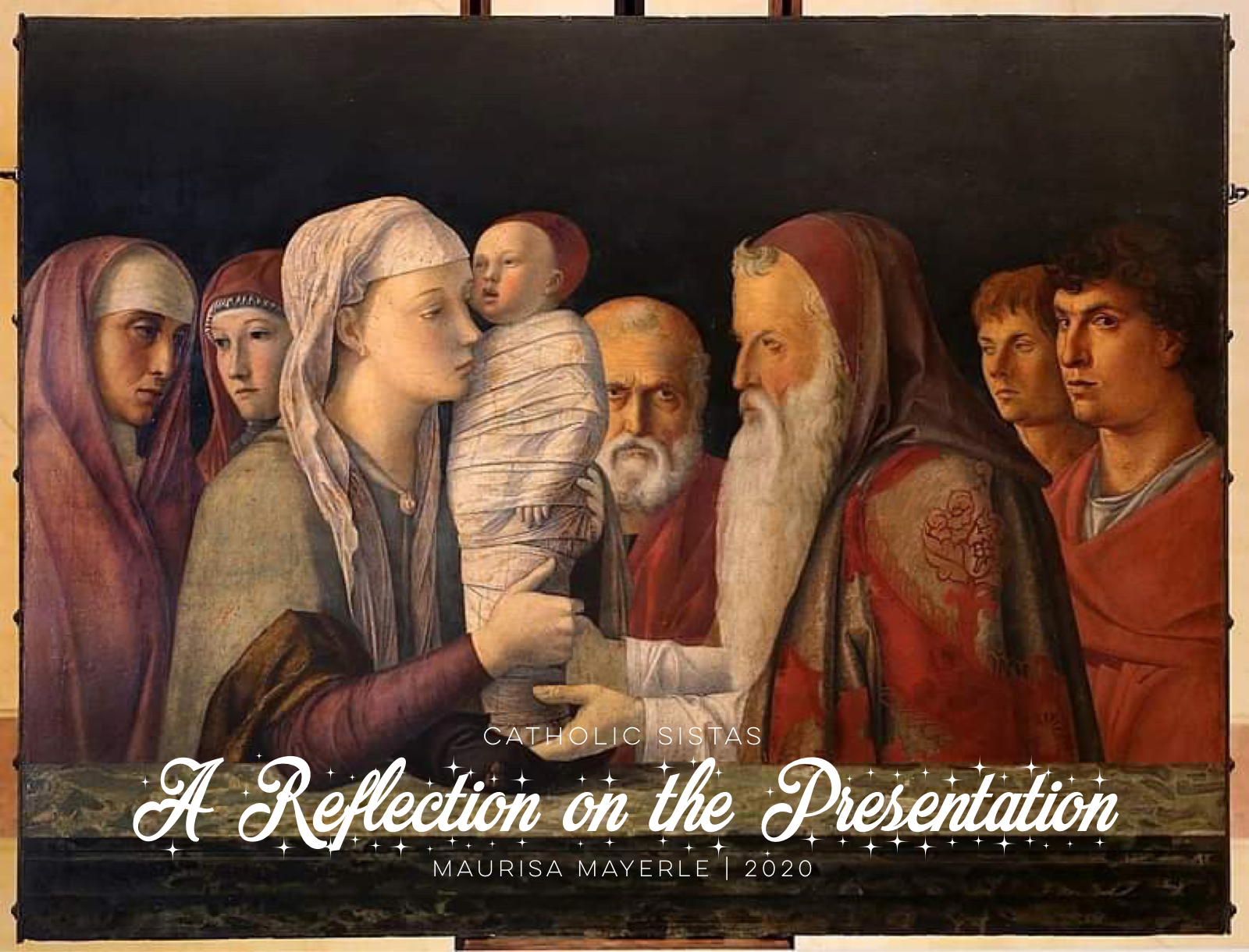 The Presentation of Jesus at the Temple by Giovanni Bellini, ca. 1469

And after the days of her purification, according to the law of Moses, were accomplished, they carried him to Jerusalem, to present him to the Lord: As it is written in the law of the Lord: Every male opening the womb shall be called holy to the Lord: And to offer a sacrifice, according as it is written in the law of the Lord, a pair of turtledoves, or two young pigeons: And behold there was a man in Jerusalem named Simeon, and this man was just and devout, waiting for the consolation of Israel; and the Holy Ghost was in him. And he had received an answer from the Holy Ghost, that he should not see death, before he had seen the Christ of the Lord. And he came by the Spirit into the temple. And when his parents brought in the child Jesus, to do for him according to the custom of the law,He also took him into his arms, and blessed God, and said:Now thou dost dismiss thy servant, O Lord, according to thy word in peace; Because my eyes have seen thy salvation, Which thou hast prepared before the face of all peoples: A light to the revelation of the Gentiles, and the glory of thy people Israel. And his father and mother were wondering at those things which were spoken concerning him.And Simeon blessed them, and said to Mary his mother: Behold this child is set for the fall, and for the resurrection of many in Israel, and for a sign which shall be contradicted; And thy own soul a sword shall pierce, that, out of many hearts, thoughts may be revealed. Luke 2:22-35

There were two aspects to Mosaic Law following the birth of a Hebrew child. According to the Law, a woman needed to undergo a period of purification 40 days after the birth of a male child. Secondly, a sin offering would be required to be made in the Temple. Although the Blessed Mother, by virtue of the virginal conception of Christ and her continued virginal integrity after His birth, was exempt from this aspect of Mosaic Law, it is a beautiful testament to her humility and obedience that she chose to submit to the Law, traveling to the Temple in Jerusalem with Joseph and baby Jesus to do so.

The typical sin offering was a lamb and a turtledove, but because of their poverty Mary and Joseph were allowed to make a sacrifice of a pair of turtledoves or pigeons. It shouldn’t pass our observation here that Mary was indeed presenting and giving her son to God, following the Jewish precept of offering the first born son to the service of God. This offering would be fully manifested 33 years later when He would become the unblemished lamb sacrificed as expiation for the sins of all mankind.

The Holy Family was met at the Temple by Simeon, who inspired by the Holy Spirit, recognized the babe as the promised Messiah. He took the Child in his arms and made several prophecies regarding Jesus and His mother. In particular that Jesus would be a sign of contradiction, destined for the salvation of the world and the Blessed Mother’s fate would be closely tied to her son’s even sharing in his suffering and redemptive work.

The painting of this scene between Mary, Jesus, and Simeon by Giovanni Bellini is a fantastic work of Renaissance art. Mary and Simeon intently hold each others’ gaze; sharing this intimate moment of revelation. The Child is wrapped tightly in swaddling clothes but one cannot help but notice how similar they appear to burial wrappings–a symbol and foreshadowing of the prophecy just spoken by the holy man.

The Feast of the Presentation, celebrated on February 2, is often referred to as The Feast of the Purification of the Blessed Virgin Mary or Candlemas.  A lovely tradition on this feast is the blessing of beeswax candles by the priest to be used throughout the year and in a procession for the feast–making a lovely connection to the prophecy by Simeon that Jesus would be “a light to the Gentiles”.

This brings us to a neat little aside. What do Candlemas and Ground Hog Day have in common besides falling on the same day?  Both have fun connections to the prediction of the end of winter weather. Just as Punxsutawny Phil predicts 6 more weeks of winter if he sees and is frightened by his shadow, the weather on Candlemas makes a similar prediction:

If Candlemas be fair and bright;

Come winter, have another fight.

If Candlemas bring clouds and rain;

Go winter, and come not again.