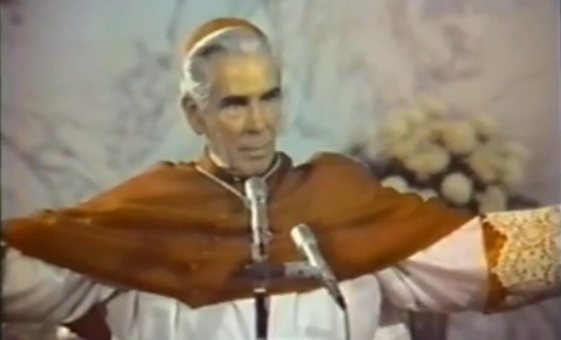 The Venerable Archbishop Fulton Sheen once gave a talk on the Devil and at the end of it he said that when there is silence, day or night, he is startled by a cry. The first time he heard it, the cry came down from the cross. When he went out and searched, he found a man in the “throws of crucifixion.” He tried to take the man down, tried to take the nails out of his feet, but the man said, “Let them be; for I cannot be taken down until every man, woman, and child come together to take me down.” The archbishop pleaded, “What can I do? I cannot bear your cry.” And the Lord said to him, “Go into the world and tell every one that you meet that there is a man on a cross.”

What a simple, direct expression of our command to evangelize. Go tell people about Christ, that he is God and that God became man and suffered and died to save us. Tell people in a way that unites them at the cross.

Fulton Sheen also describes in this sermon that the Devil is “anti-cross.” Anything that is of the Devil leads people away from the cross. He explains that anything that produces discord or brings about division in the Church is diabolic. That is, again, a simple test to remember when we evangelize, when we speak to others about Christ or even live our lives as Christians. Is what I’m about to say or do going to cause discord? Speaking the truth can be hard enough if we fear rejection or isolation; speaking the truth in love, in a way that communicates to people not inclined to listen, takes skill and effort. You have to consider the audience before yourself.

Another disruptive element in society, he says, is also the decline of discipline. “The decline of the spirit of discipline is a hatred of the cross.” It starts in schools, and when a nation tries to impose discipline without the cross, the nation becomes totalitarian. The disciplinary character of Christianity commits people to a common purpose beyond themselves. Discipline without the cross brings destruction of human liberty. We watch this battle unfold daily.

This continuing Easter week as we pray before the cross and celebrate the Resurrection of Christ, let’s pray also that we are granted the words we need to tell others about the man on the cross, and let’s pray they hear us and join with the angels in praising our Lord.

I highly recommend watching the full talk. It is life-changing. And then I highly recommend sharing it with anyone you know who is new to the faith or who may not understand how to think about the Devil and to protect against him. This talk, contrary to what you many expect, will leave you with a sense of relief, hope, and deep gratitude.

Especially note in the first clip 5:58 – 7:20. He explains that “diabolic” means discord and talks about division in the Church. Then he discusses three ways a psychiatrist has identified the diabolic: 1) love of nudity, 2) violence, and 3) split personality (no inner peace).

Note at 6:00 he discusses three shortcuts to the diabolic: 1) permissiveness, 2) anything that makes us say “Oh!”, and 3) concern only with social and political order.

He begins describing the evil in nations, the disruptive element. “The decline of the spirit of discipline is a hatred of the cross.” It starts in schools.

Listen to the very end, when he tells what he hears when there is silence.