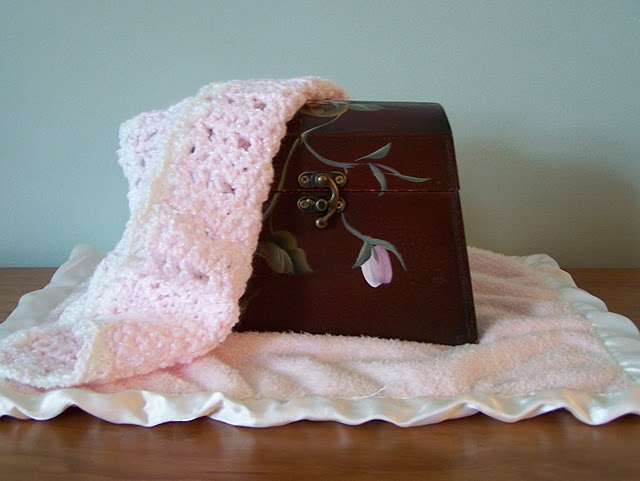 I walked through the emergency entrance of the hospital nervous about what I was about to do.  I held a small slip of paper in my hand where I had jotted down the directions the woman on the phone had given me.  I kept expecting someone to stop me, ask me where I was going or if I needed something, but it was quiet with very few people around.  Emergency rooms rarely look like they do on TV.

I found the hallway I needed, passed the elevator, and went through what I hoped was the correct doorway.  Down another hallway I found the door marked “Pathology.”  I took a deep breath and tentatively knocked.

The woman was friendly.  We chatted a little while she located what I was there for along with some paperwork for me to sign.  Before handing me the papers she asked me a question that I’ll never forget: “What do you plan on doing with it?”

I was struck by the word “it.”  Part of me wanted to firmly inform her that “it was a baby and it was a she.”  But I bit my tongue and instead answered the question.  It wasn’t until the answer came out of my mouth that I realized what a witness I was giving.

I very innocently said, “We are giving her a proper burial.”

I saw the slight hesitation in the pathologist as it registered for her what I had just said.  She wrote down “burial” on the paperwork and handed it to me to sign.  I signed and was given the three-inch tall, prescription size bottle that contained my daughter’s remains.

It felt odd leaving the hospital.  I carried that little bottle back to my car, holding it ever so carefully.  It felt irreverent to put it in my purse or slide it into the side of my briefcase.  Even carrying it by my side seemed too casual.  I held that tiny bottle in front of me like I was carrying a precious jewel.  I was: a precious little girl that lived only 9 weeks.

It wasn’t the first time I had lost a child, but it was the first time I found myself in this situation.  Our first loss was two years earlier, a natural miscarriage at 8 weeks.  We had only been married about 5 months and it was the first tragedy we went through together as a couple.  We named that child Casey Marie and I spent the next several months wishing I had answers.

Answers are few and far between when it comes to pregnancy loss.  I have learned that lesson well.  With Casey we were left with nothing.  I felt empty for months.  But eventually we moved on, I got pregnant again and things looked better.

We got through those first few critical weeks and before we knew it we were in the second trimester.  Finally, we were having a baby.  I felt relief knowing we were out of the “danger zone.”  Unfortunately, no one tells you that things can happen even after the first trimester.  At 22 weeks my water broke.  The baby was still alive.  I was admitted to the hospital while they decided what needed to be done.  24 hours later it was discovered that the baby had died.

One of the hardest things I’ve ever had to do was to give birth to a baby I knew was no longer alive.  Thankfully it was a quick delivery.  I spent the rest of the day holding my son.  We named him Zachary Thomas.  A week later he was buried at the Catholic cemetery not far from our house.

I wasn’t prepared for another loss.  After the miscarriage and the stillbirth, I was absolutely positive that this third pregnancy was going to be fine.  I don’t know why I felt that way.  I had no clear answers, mostly just guesses, regarding our first two losses.  But that didn’t seem to bother me.  I just knew things would work out this time.

I remember the ultrasound when I saw the baby and saw the heartbeat.  It was encouraging.  But I also remember the next ultrasound when the doctor was having difficulties with the machine.  I remember finally seeing the baby, but something didn’t look right.  I remember her leaving the room and coming back with another doctor to take another look.  And I remember her moving the screen so that I could not see it.  That’s when reality started to sink in.  I knew before she even told me.

With no signs of a miscarriage starting we opted for a D & C.  But before agreeing to it I insisted that I wanted the baby’s remains.  It was an unusual request, but by now my doctor knew how I felt and she didn’t argue with me.  I’ll never know if she had to do any arguing on my behalf, I imagine there was probably some, but in the end I got what I wanted.

I walked through that emergency room entrance and found the pathology lab.  I took my baby girl home, in a little, prescription-sized bottle with hospital labels wrapped around it. 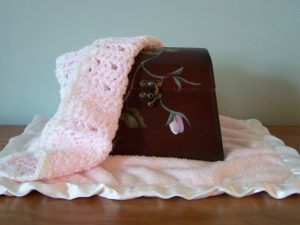 We named her Brigit Ann and we buried her in the Catholic cemetery next to her brother Zachary.  We kept it to just a burial service this time, but still we had about 20 people
there with us.  The little bottle was wrapped in a pink blanket and placed inside a pretty box I had bought.  I carefully carried that box to the cemetery with me the day of the burial service.

This time I had answers; answers in the earthly sense of things.  It was something I could hold onto.  Knowing definitively that there was a chromosome abnormality gave me a reason.  It still doesn’t answer the bigger questions: Why?  Why this child?  Why me?  Why does it have to happen at all?

We live in a fallen world.  For now, that’s the best answer we have.  It’s not comforting, but it’s all we have.  I sometimes think that I’ll have the answer one day.  One day, by God’s mercy, I’ll enter heaven and I’ll get to hold my three little saints.  And maybe then I’ll find out why I didn’t have the chance to hold them in this life.

But then I remind myself that when, hopefully, that day comes when I can be with my children, the answer to the “why” questions won’t matter anymore.

4 Replies to “A Little Bottle”