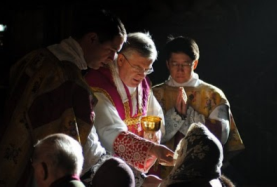 When I look online for information about veiling at Mass (or anywhere in the presence of the Blessed Sacrament), it makes me sad to see that this is such a controversial topic. To me, veiling is a beautiful devotion, like the Rosary, that has the potential to edify the entire Body of Christ by drawing attention to both the sacredness of women and the magnificence of the Real Presence of Christ in the Eucharist.

My journey to wearing a veil began as I read a discussion thread about this very topic among several good friends of mine. For months, I had been attending daily Mass and was finding myself quickly falling head over heels in love the same Eucharistic Lord I had nonchalantly received hundreds of times since my First Holy Communion in 1995.

When my friend Elaine mentioned why she veiled, she noted that the Church is rich in symbolism. She said, “The Church veils holy things—the tabernacle is veiled, behind the veil is the Body of Christ, and I am a vessel of life. A living tabernacle.”

This veiling of sacred things speaks to a kind of hiddenness that doesn’t seek to conceal in the negative sense, but rather draw us into the depths of mystery, allowing for the mysterious to unfold. In the Old Testament, Moses veiled his face. The Holy of Holies was veiled. Brides are often veiled before the “veil is lifted.” Even Jesus, the infinite God whose glory is revealed in heaven, is “veiled” before us by the accidents of bread and wine. As a wonderful priest puts it, “Like the effect of the virtue of modesty, by the very fact that something is hidden, it is allowed to become that which it is: mysterious and beautiful.”

Elaine also mentioned that veiling represents the desire to humble oneself before God: “When a man walks into church he removes his hat as an act of humility. Men show their bald spots and all of that in this act. When a woman covers her hair, her glory, she is similarly humbling herself before God.”

My heart heard that. I was absolutely in love and in awe with the magnificent reality of the Eucharist and Christ’s perfect act of self-giving—He, the God of the universe, wanted to be in such intimate union with me, yes, ME! that He wanted to physically enter into the very depths of my being and consume me with His love! And I just wanted to be His.

I admit, I also wanted to really feel like the precious child of God I’d been told so many times I was. Up until recently, I had never really believed it. I understood that God loves us…“us in general,” but not necessarily me in particular. After all, I had heard so many times from my loved ones how I had failed to be what they wanted me to be (most notoriously, thin and perfectly in control of my emotions), that I figured I was nothing special. I was nothing for someone else to die for, let alone God himself. So as I discovered the intimacy of the love of God, I longed to feel just how precious I was in His eyes, in spite of my sins and imperfections.

The first time I wore my veil before the Lord, I recalled Elaine’s words. “I am a living tabernacle.” In my heart, my longing to be His, wholly and completely, felt like fire. It reminded me of the fire I could see emanating from the Sacred Heart of Jesus. I was that precious child of God, and I just wanted to be His.

Now, before I enter the sacred space that houses the Blessed Sacrament, I pause. I remind myself that the mystery I am about to enter in the Mass transcends time. I carefully slip my veil on over my head, ready to enter that sacred space and longing ever so intensely to allow Christ to marry me in the Eucharist. I am His bride.

If you are thinking about beginning this beautiful devotion, remember that it is God before whom you wish to humble yourself. Like a religious habit, your veil is a public proclamation of your desire to submit to the will of God for your life and to answer the universal call to holiness and continual conversion. Your veil is also a sign of the great dignity that is due to a woman, who has the potential to receive life within herself… both human life and the supernatural life of God. This is an important message the world needs to hear, now more than ever! Above all, wear your veil for the greater glory of God. 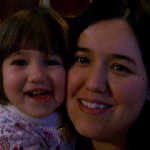 Lily is a full-time, homeschooling mother of three (soon to be 4, in February 2012) with a special love for veiling in the presence of the Blessed Sacrament. Looking to promote a deeper reverence to the Blessed Sacrament, Lily founded Veils by Lily in August 2010 and now spends most of her spare time filling orders and returning inquiries about veiling. She blogs occasionally at The Catholic Wife.

55 Replies to “A Call to Veil: The Mysterious Unfolds”