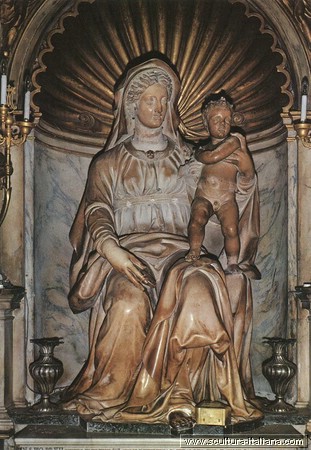 It’s May and that means it’s Mary’s month. Mary is so special to our Catholic faith that all around the world she has acquired a variety of titles and traditions. Whether her names are traditional, attributed to a Marian apparition or special devotion, or developed out of a specific culture, there’s probably at least one (if not more) for which we each have a particular fondness. In this post, I thought it would be fun to explore some Marian titles that are a little less well-known. So let’s have some fun and explore some new names for our Blessed Mother.

Our Lady of the Pillar

You may recognize this one if you are of Spanish descent; for the rest of us, this may be a totally new title for the Blessed Mother. It was new to me. This is a title for Mary attributed to an apparition said to have occurred in 40 A.D. This is the first apparition of Mary in recorded history and amazingly, she was still living in Palestine at the time. As tradition has it, Mary appeared to a discouraged St. James in what is now Zaragoza, Spain. He was about to give up on his attempts to convert the pagans of the Iberian Peninsula when Mary appeared. Today a huge shrine has been built on the site. To read more about this apparition, check out this article: Our Lady of the Pillar. 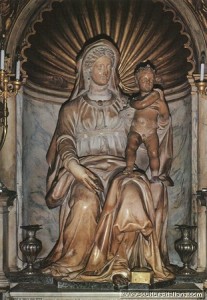 Also known as Our Lady of Childbirth or our Lady of Smooth Delivery, this is a Marian title many of us may want to learn more about. If I ever get the chance to go to Rome again I’m definitely going to go look for this sculpture. Carved in 1521 by the sculptor Jacopo Tatti, it is housed in a special niche in the back of the Church of Sant’ Agostino near the Piazza Navona. For some five hundred years, Roman women have prayed to la Madonna del Parto for a child, for a healthy pregnancy, and safe childbirth. The statue is surrounded by offerings from parents on the successful births of their children, including pictures, birth announcements, and pink and blue bows. Read more about this Marian title at this page: Tell us About Our Lady of Smooth Delivery.

In the United States, many of us may be familiar with Mary under the title of Our Lady of La Leche, whose shrine is located in St, Augustine, FL. The history of this title may actually go back to 4th century Bethleham. To this day, a Franciscan community maintains the grotto there known as the Milk Grotto; its centerpiece is the Virgin Mary nursing the infant Jesus. Crusaders in the Middle Ages most likely brought this devotion to Europe. The image became popular in Spain under the title Nuestra Señora de la Leche Y Buen Parto (in English: Our Lady of the Milk and Happy Delivery) after a woman and her baby, both expected to die in childbirth, lived through the intercession of Mary under this title. Devotion spread and Spanish settlers brought that devotion to the New World where they built the first Marian shrine in what is now the United States. Read more about Our Lady of La Leche:

Our Lady of La Leche’s History

Our Lady of Einsiedeln

Our Lady of Einsiedeln is named for a statue of Mary said to work miracles and located in a chapel 20 miles southeast of Zurich, Switzerland. In the late 9th century, St. Meinrad (a Benedictine monk) received the statue from Abbess Hildegard of Zurich and brought it with him into the wilderness. He built a hermitage and eventually a small chapel for Our Lady. The site of St. Meinrad’s hermitage became Einsiedeln and developed into a popular pilgrimage site, receiving about 50,000 pilgrims during the middle ages and continues to receive about 200,000 a year.

The statue is a Black Madonna, her color being attributed to the smoke of the votive candles surrounding her. Her popularity is mostly known in Switzerland, Germany, and Austria. More on the Black Madonna, Our Lady of Einsiedeln here and here.

On December 8, 2010, Bishop David Ricken of Green Bay, WI approved the apparitions of Our Lady of Good Help in Champion, WI as worthy of belief by the faithful. Our Lady of Good Help appeared to Sr. Adele Brise in October of 1859 with a message to teach the faith to the children. The Shrine of Our Lady of Good Help has been a center for prayer for the past 150 years and many miracles have been attributed to Our Lady’s intercession. This is the first approved Marian apparition in the United States. To learn more about the Shrine and Sister Adele visit the Shrine’s website here. Visit this link to read more about the approval of the apparition. 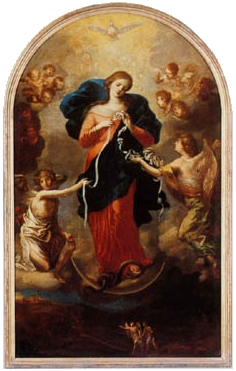 Mary, Undoer of Knots is a devotion to the Blessed Mother that developed in Germany in the 1700s. The reference to Mary as one who can untie the difficult knots of our lives goes as far back as St. Irenaeus in the second century. In 1700 the artist Johann Melchior Georg Schmittdner, painted the image that is still revered today based on a story of a couple whose marriage was saved after the husband and their priest prayed together for the marriage and a miracle occurred with the couple’s wedding ribbon. The painting now hangs in the Church of St. Peter in Perlach am Augsburg (Germany). Not a very well-known devotion, it was brought to Argentina in the 1980’s by Archbishop Bergolio (now Pope Francis) and continues to be popular today. After his election as Pope, Pope Francis presented Pope Emeritus Benedict XVI a print of Mary, Undoer of Knots thus sparking further interest and popularity in the image over the last year. Read more about the story of Mary, Undoer of Knots here.

The Kitchen Madonna, or the Madonna of the Kitchen 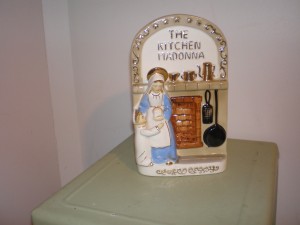 This one is not so much a title for Mary as it is a tradition of the faithful. Keeping an image of the Virgin Mary in the kitchen is supposedly an old tradition, although information to support this claim is scarce. At any rate, in more modern times small statues and other images have been created showing Mary in contemporary dress often holding a broom or a loaf of bread and sometimes depicted with the child Jesus at her side. My own mother has always had a “Kitchen Madonna” in her kitchen, so I grew up with the custom, but never gave it much thought. More recently I have seen some interest in images of the Virgin Mary holding a broom and that sparked my interest in learning more. The image is a relatively new idea of the 19th and 20th centuries. These images are meant as historical representations to make Mary more relatable to our day. The images of the Kitchen Madonna vary a lot. Since the kitchen is often the heart of the home, it makes sense that a depiction of Mary would find a place there. Even before specific images of Mary in front of a hearth or holding a broom became popular, it seems that an icon or other image of Mary was often kept in the kitchen as a reminder that Mary too was a housekeeper and the heart of her home.

For more Quick Takes posts, hop on over to Conversion Diary for a visit.