On December 22, 2004, I got engaged to a wonderful man. The proposal involved a religious backdrop, specifically a replica of the Grotto of Lourdes, with a statue of the Blessed Mother and one of young St. Bernadette.  It was a peaceful, beautiful location (albeit very cold, in late December!), and my husband’s choice of this location signaled to me the importance that our Faith would play in our marital relationship. I found out later that some time before the proposal took place, my husband went to my parents’ home to let them know that he intended to propose to me, and he brought with him something very special and unexpected – a beautiful statue of the Holy Family. This statue was given to my husband by a priest friend, and my husband told me that he believed it to be a sign of sorts, confirming what he already knew – that he and I were supposed to be married. He brought the statue to my parents’ house so that they could see this sign. 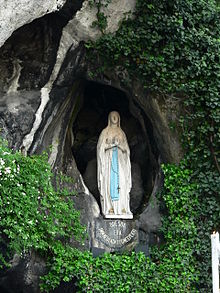 I think my parents were a little surprised by my husband sharing this statue with them (though I am fairly certain they were not surprised that he was there to talk about marrying me). Maybe they were wondering why a statue of the Holy Family would be taken by my husband as a confirmation that we were supposed to get married (my dad, especially, may have been wondering this, as he is not Catholic). Maybe you are wondering, too.

I think a big part of the reason is that my husband’s name is Joseph and my name is Mary (I realized for the first time last night that our names actually contain reference to the full Family, as my middle name has a connection to Jesus). We have been on the receiving end of countless jokes about our names being the names of Jesus’ parents (especially once I was expecting our first child – I can’t tell you how many times we heard “so are you going to name the baby Jesus?”*). We have always seen it as something kind of sweet and special, and perhaps even another little sign that we were intended by God to be together. I have always felt honored to be named after the Blessed Mother and I feel even more honored that God determined that I would be married to a man who shared the name of Mary’s husband. However, it sure does give us a lot to live up to!

I believe that the Holy Family is a patron of my little family in a special way, but I also believe that they are a model for all of us who are married with children. Today is the perfect day to reflect on this fact, as it is the day that the Church celebrates the Feast of the Holy Family this year. Normally this feast is celebrated on the first Sunday after Christmas, but when that Sunday is January 1, as it is this liturgical year, the feast is celebrated on December 30 (because January 1 is the Solemnity of Mary the Mother of God).

This feast has been promoted by the Church as a way to counter the breakdown of the family unit in our society by presenting the Holy Family as a family to be emulated. Yet, we do not have a lot of facts about the life of the Holy Family. Scripture is mostly silent on Jesus’ early life, and thus his life with his parents. So how do we know what we are supposed to be emulating? I think that even though Scripture may not tell us a lot about Joseph and Mary and their relationship with Jesus, there is so much that we can take away from what Scripture does tell us.

We know from Scripture that each member of the Holy Family was humble and fully submissive to the will of the Father. I wrote a bit about these qualities in Mary and Jesus in my last post. Scripture portrays Joseph with these same characteristics. The Gospel of Matthew tells us that when Joseph found out that Mary was expecting a child (of course knowing that he was not the father), he determined that he would divorce her (showing his adherence to the law, or righteousness), but he decided he would do it quietly because he did not want to publicly disgrace Mary. At this point, Joseph did not understand the extraordinariness of the situation. It would have been entirely understandable and seemingly justified for him to have been hurt, embarrassed, and angry by the fact that she was expecting a child. How many of us would have taken satisfaction in the public shaming of someone in this situation, due to our own pride? But Joseph humbly decided that he did not want to shame Mary. 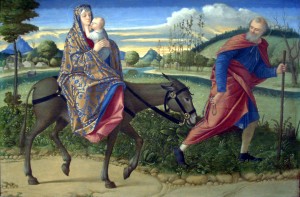 Then, when he was instructed by an angel not to divorce Mary because she was carrying a very special Child conceived by the Holy Spirit, he was unquestioningly obedient (he later displayed the same unquestioning obedience when an angel instructed him to take his family to Egypt to protect Jesus from being murdered on the order of Herod). I can only imagine what humility was required to accept the Lord’s will in this situation, when there was so much potential for embarrassment and disgrace for both Mary and Joseph. This same humility would be required for Mary and Joseph to parent Jesus, who was God Himself! Though Jesus surely would have submitted to them as his human parents, it seems to me that they also would have had to submit to their own son in some ways. Though parents normally educate their children, surely Jesus would have had a lot to teach his parents (as we catch a glimpse of when they find him in the Temple at the age of 12).

Imagine what a peaceful home it must have been with each person in the family being filled with humility and obedience. There would have been a perfect harmony to the relationships between husband and wife, and parents and child. Imagine now how much more peaceful our own marriages and families could be if each member of our families were humble and entirely submissive to God’s will? Too often, marriages today are power struggles, with the parents fighting each other for power and the children fighting the parents for power, instead of everyone humbly submitting to God’s authority and the authority of those who God put over them. Too often, spouses are unwilling to humble themselves to say “I’m sorry” to each other, or to show each other mercy instead of insisting that the other person gets what they “deserve.” Imagine if everyone in the family were to put the needs and feelings of others above their own egos, and the will of God above their own wills? Imagine if even just one person in the family were able to do this – it might change the family dynamic and set an example for other members. Perhaps you (and I) can begin to work on being that person.

Additionally, I think it’s worth reflecting on the fact that we see Mary and Joseph’s obedience principally in their welcoming of a child into their lives in circumstances that would seem far from ideal. It seems to me that the unwillingness of people today to accept children into their families in the Lord’s timing rather than their own (as demonstrated through the prevalence of birth control and abortion) is a huge contributing factor in the breakdown of the family unit. The issue of adding children to the family is one that has the potential to create much disharmony in a relationship, if both spouses are not on the same page. But even if they are on the same page, there still will be discord if the spouses are intent on being in supreme control of this aspect of their family life rather than trusting in God’s plan for their lives. I myself am guilty of being afraid to place my trust in God’s plan in the way that Mary and Joseph did, and that is why I am grateful that the Church helps to keep me on the right path through her teachings on contraception and openness to life in marriage.

Something else to meditate on is the fact that God was always physically in the midst of the Holy Family. Of course, we can’t be in God’s presence in that exact way (the closest we come to that is in the Eucharist, where God is substantially present), but we can be inviting of God’s non-physical presence in our home, and cultivate more mindfulness of the fact that God truly is always with us even though we cannot see Him. We can try to behave as if God were standing right in front of us, as He stood right in front of Mary and Joseph, rather than behaving in a way that tells Him that He is unwelcome in our family. Think about what a radical difference it would make if all members of our families were more inviting of and conscious of God’s presence in our homes. 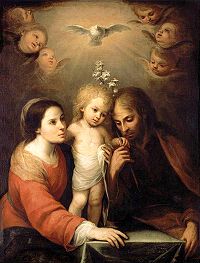 One final thought about the Holy Family: I find it interesting that the Holy Family exists at all. It’s worth reflecting on the fact that God saw fit to send His Son into the world via a human family. There is a theological reason that it mattered whether or not Jesus had a human nature but it does not seem strictly necessary that Jesus come as a baby and live in a family with not only his mother, but also a man who acted as his earthly father. This tells me that families are important. More specifically, intact families are important. Fathers are important (despite our society’s attack on them)! What can we do to uphold the dignity and importance of families in our increasingly anti-family society?

I wish I could have included a picture of that special Holy Family statue I wrote about in the beginning of this post. Unfortunately, after five years of the statue being displayed in our home, someone (I won’t say who ;)) knocked it off the low bookshelf where we kept it, and it broke. The statue was so important to both my husband and me and it was a sad moment when it broke, but ultimately, it was just a “thing.” What matters more than that “thing” is that we remain conscious of the love and example of the Holy Family and try to live with even a fraction of the humility, obedience, faith, and trust that they had.

*We didn’t name our first child (or our second child) “Jesus.” However, my older daughter is named after my middle name, so as it turns out, her name is connected to Jesus.

Top Picture is a photo of the actual Grotto of Lourdes in France.

Middle picture is Vittore Carpaccio’s The Flight into Egypt.

7 Replies to “The Model Family”