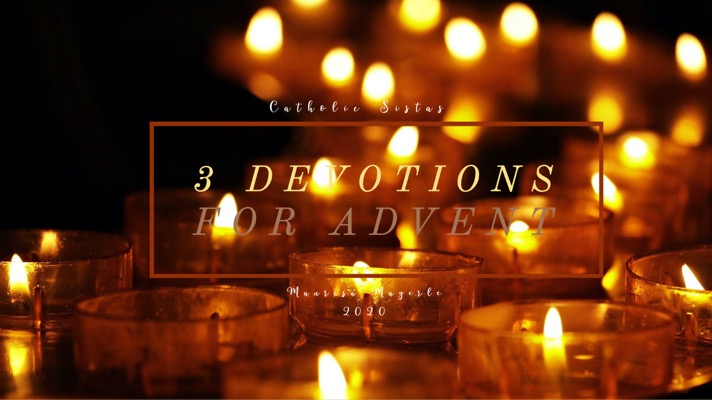 Advent is such a beautiful season of anticipation and preparation. There are so many wonderful saints to celebrate and devotions to practice.  Over the years we’ve observed the passage of Advent using the Jesse Tree and an Advent Calendar. We’ve joyfully celebrated the feasts of Saint Nicholas, Saint Lucy, Our Lady of Guadalupe, and the Immaculate Conception. My family loves the traditions associated with each of these devotions. As I’ve learned more about many of the older, lesser known traditions we’ve added more to our Advent observances.  Three absolutely lovely traditional devotions are observing the Advent Ember Days, attending a special advent mass dedicated to Our Lady called a Rorate Mass, and praying the ancient O Antiphons before our evening family rosary.

Basically, Ember Days occur four times a year and roughly coincide with the change of seasons. The Ember Days of Advent fall the Wednesday, Friday, and Saturday following Saint Lucy’s feast on December 13th. Ember Days are marked by voluntary, partial fast and abstinence from meat (full abstinence on Friday, of course) as penance, by prayerful gratitude for God’s abundant gifts, and in especial prayer for the priesthood.  If you have access to a Traditional Latin Mass parish you can attend mass in which the Ember Days are particularly observed in the readings and propers for the day. For a more in-depth look at the observance of Ember Days, check out the link at the end of this post to an article I wrote for Catholic Sistas a few years ago.

A special mass found only in the Extraordinary Form is the Rorate Caeli Mass or Mass of the Blessed Virgin Mary for Advent. It honors the Blessed Mother as the vessel which bore the Light of the World. Celebrated in the early morning before dawn and lit only by candlelight the church progressively grows brighter as the sun begins to rise. The symbolism of awaiting the dawn and arrival of the Light of the World is palpable. What a lovely way to honor Our Lady and what a deeply transcendent way to celebrate Advent meaningfully. I attended my first Rorate Mass last Advent. It was so incredibly peaceful and breathtakingly beautiful. With the times we are living in, if you are blessed enough to have access to a Traditional Latin Mass parish this devotion is definitely one with potential to raise your observance of Advent to a new level.

Praying the O Antiphons on the days leading up to Christmas Eve is probably the easiest and most accessible of the three devotions to implement. Over a thousand years old, the O Antiphons are the seven antiphons recited preceding the Magnificat during Vespers. They are so named because each antiphon begins with “O”—O Sapientia (Wisdom), O Adonai (Lord), O Radix Jesse (Root of Jesse), O Clavis David (Key of David), O Oriens (Rising sun), O Rex Gentium (King of the Nations), and O Emmanuel (God with Us).  You may recognize each of the 7 titles of the Messiah from the familiar Advent hymn O Come O Come Emmanuel.

You can easily pray the O Antiphons at home with your family. Beginning on December 17th and ending on December 23rd recite the appropriate O Antiphon, then the Magnificat, and then the O Antiphon once again. Family Feast and Feria has a lovely free printable prayer booklet you can download to assist in observing this beautiful devotion. For your little ones; Look to Him and Be Radiant has coloring pages for each of the O Antiphons. It’s a wonderful devotion that draws us into the mystery and prophesies of Christ.

If you end up adopting one of these traditional devotions this Advent, let us know in the comments. May you and your families have a most blessed and fruitful Advent and may you be well prepared to welcome the Christ Child into your hearts and homes this Christmas.

What are Ember Days

Rorate Caeli Masses in Honor of Our Lady