“Selfish, irresponsible, insane, stupid.” “I hope she dies.” “She should have been aborted.” “I hope her child is a vegetable that will fill them with regret.”

Horrible, hateful words spewed about a woman who has likely never wished anything but kindness on others. Words spoken by people who have never met this woman. What heinous crime has she committed that deserves this antagonism?

She and her husband announced that they will be having a baby. Which is not a terribly astonishing announcement for most married couples to make, except… 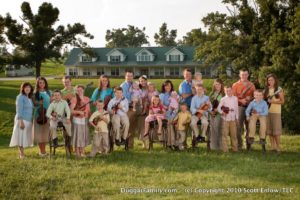 This will be the couple’s 20th child. The mother, Michelle Duggar, is 45 years old. Her pregnancy with #19 involved complications that resulted in her child being born nearly 15 weeks early. These 3 factors (number of children, mother’s age, complications during last pregnancy) have turned this once again newly-pregnant mother into the butt of crude and cruel jokes and downright hateful taunts.**

The mantra of our modern culture: “my body, my choice, don’t judge me”, apparently only extends to women who wish to end their pregnancies by abortion; a woman who wishes to GIVE life to children is mocked and derided by the very people who believe that “I need to do what’s best for me.” In the words of Rabbi Shmuley Boteach, the father of a large family himself:

“Why are people impressed that Jay Leno owns 20 motorcycles, but disgusted that some religious families choose to have 10 children?

Sadly, many people who condemn this family for opening up their hearts to another child consider themselves Christians, or even Catholic. So, what is the Bible’s opinion on Mrs. Duggar’s elusive #20?

In Genesis 1:28, God commands Adam and Eve to “Be fruitful and multiply, replenish the earth, and subdue it; and have dominion over the fish of the sea, and over the fowl of the air, and over every living thing that moveth upon the earth.” Not only was this a directive to have children, but it also makes it clear that humans have eminence over animals. (Yes, children > environment. We are called to be good stewards of the earth, not to intentionally dissipate our species for the sake of the polar bears.)

Biblically, children are ALWAYS considered a blessing. God frequently bestowed upon people the blessings of children when they have been faithful to him in something particular. “I will look on you with favor and make you fruitful and increase your numbers, and I will keep my covenant with you.” (Leviticus 26:9). “If you obey the Lord your God… the fruit of your womb will be blessed.” (Deuteronomy 28:4). 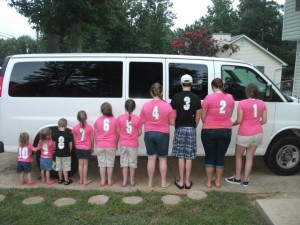 Psalm 127 states that, “Behold, children are a gift of the Lord, the fruit of the womb is a reward. Like arrows in the hand of a warrior, so are the children of one’s youth. How blessed is the man whose quiver is full of them.” So not only are children a blessing, but having MANY children is a blessing! In the New Testament, Christ Himself speaks only highly of and with great tenderness towards children. “Let the children come to me; do not hinder them, for to such belongs the kingdom of God.” (Mark 10:14)

On the contrary, nowhere in the Bible is barrenness considered a blessing. While there are many Biblical women who suffer from infertility, whether temporarily or permanently (Sarah, Michal, Hannah, Elizabeth), they express nothing but sorrow over this trial they bear. In fact, carrying his Cross on the road to Calvary, Christ speaks directly to the women of Jerusalem, saying, “Daughters of Jerusalem, do not weep for me; weep instead for yourselves and for your children, for indeed, the days are coming when people will say, ‘Blessed are the barren, the wombs that never bore and the breasts that never nursed.’” (Luke 23:28-29). Christ says we should WEEP for this day! – the day in which childbearing is considered a curse rather than a blessing, and in which material possessions are more important than the gift of new life. But instead of weeping, women today shove themselves full of artificial hormones, plastic and metal devices, and surgically alter their reproductive organs in order to cause sterility. What was once considered a terrible burden to bear is now considered “being responsible.”

The Catholic Church, in Her Divine Wisdom, also continuously emphasizes the preciousness and infinite value of each human soul. Pope Paul VI, in his encyclical Humanae Vitae, echoes the Second Vatican Council when he writes “Children are really the supreme gift of marriage and contribute in the highest degree to their parents’ welfare.” The Catechism of the Catholic Church says that a child is “the supreme gift of marriage.” (CCC 2378)

The moral theologian Frank Sheed, writing about married life and the decision whether to forego  having more children, speaks plainly: “Indeed for one who has grasped what a human being is— made in God’s image, immortal, redeemed by Christ—only the most serious reason would be strong enough to support such a decision.”

None of these passages, whether in Scripture or in the teachings of the Church, seek to quantify; there is never a point where suddenly children are no longer a blessing. If each soul is created in the image and likeness of God, and has infinite value, then there can never be a point where we can say “there are too many children.” The first child in a family is no more precious or important than the twentieth; ALL are infinitely cherished by God. If each human being is “made in God’s image, immortal, redeemed by Christ,” how can we EVER express sorrow or disdain over the creation of that new little life inside a mother’s womb?

Most women are not called to have 20 children, or even 10 children. Some women may not be called to bear children at all. What we are all called to do, however, is to be open to the blessings of God in our lives. Children ARE a blessing. And since God is directly involved in the creation of each human life, how can we question His judgment in bringing a new soul into the world? It is clear – God will never send any more children to a family than the number He wishes for them to have. And God cannot be outdone in generosity – if we unite ourselves to His Will for our family, He will certainly bless us abundantly!

**This is not in any way intended to be a discussion about the Duggars religious views or child-rearing philosophies. I simply use them as an example of a family who has come under attack lately for the sole fact that they are adding another child to their family. The world does not condemn a woman with health problems who desires to get pregnant with her first child, nor a woman of advanced maternal age desiring a pregnancy but who does not yet have children. Therefore, it is only logical to assume that the widespread negativity towards her pregnancy stems not from her health problems or her age, but merely from the NUMBER of children she has.