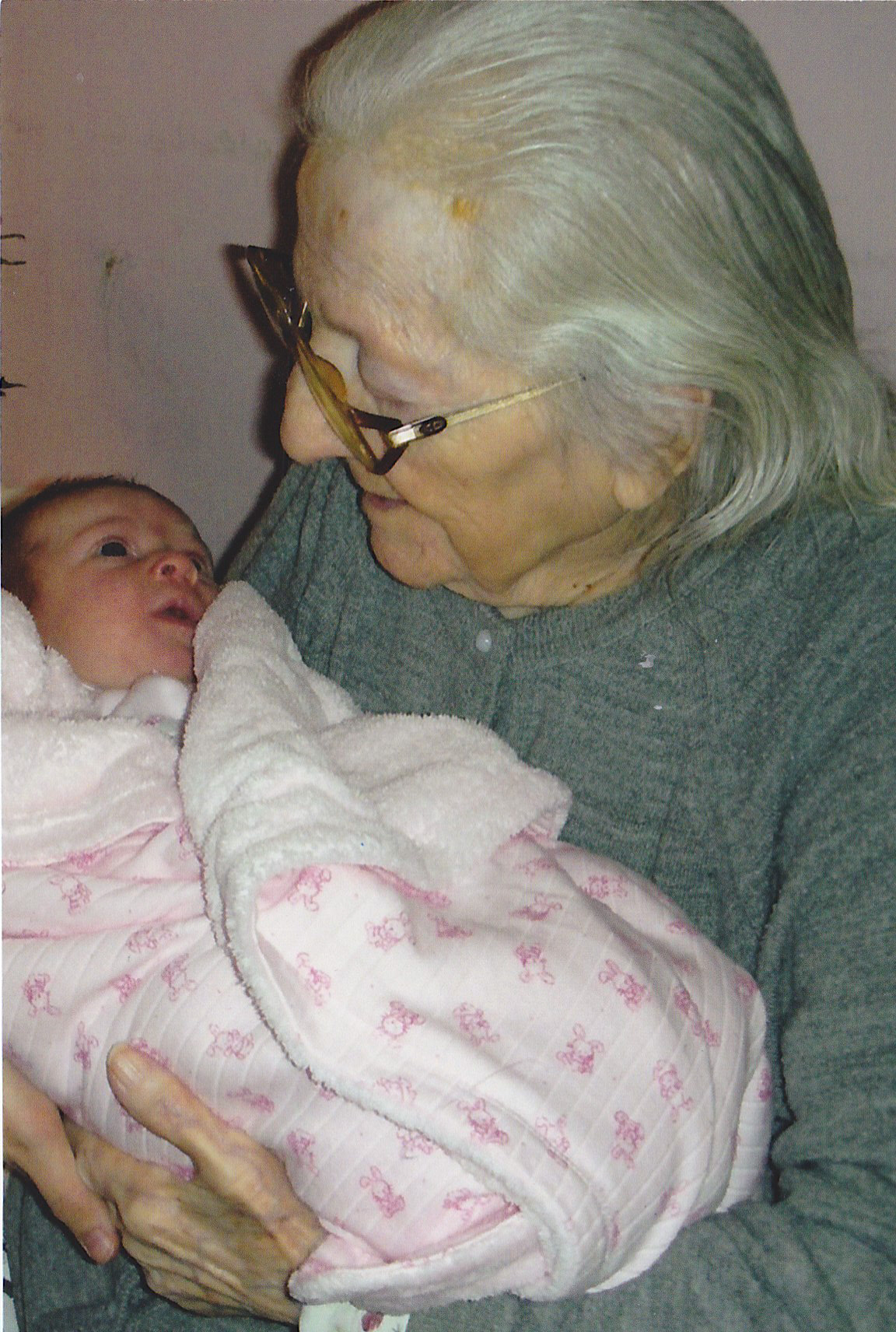 As you are probably aware by now, October is Respect Life month. While abortion is and should be a main focus of this month, this post will address a different aspect of the Respect Life theme – the dignity of those who are aged and infirm. These lives don’t get as much attention as the lives of the unborn when we talk about “respect for life,” but they too are under attack by our society. Assisted suicide and Euthanasia are becoming more accepted and defended by those who cannot see that all lives have dignity from conception to natural death, and that it is wrong to take any life (including our own) before God calls us home. Society is becoming more and more intolerant of lives that are “imperfect” or not “useful.” Perhaps it is because the elderly and the ill remind people of their own mortality – something that we as a culture want to think about as little as possible. Whatever the reason, it is clear that our culture’s utter disrespect for the dignity of all human beings starts with the tiniest embryo but extends through every stage of life.

In illustration of this point, televangelist Pat Robertson recently called Alzheimer’s disease a “kind of death” and basically sanctioned the divorcing of a spouse with Alzheimer’s so that the “surviving” spouse could move on with his/her life with a new partner. Pat Robertson never clarified or apologized for this comment, to my knowledge.

I’ve seen first-hand how Alzheimer’s can destroy a personality and lead to unspeakable suffering for those who have the disease, as well as for their loved ones. But it is not the same as death. People with Alzheimer’s are still living and breathing. They have human dignity and deserve to be loved, respected, and cared for. When someone is suffering from Alzheimer’s, his/her spouse is bound by the vow they took to be faithful in sickness and in health. “Til death do us part” means just that – DEATH. As in, the ceasing of brain and heart function and the separation of the soul from the body. Pat Robertson’s assertion to the contrary is a product of a culture that is too sick itself to see the fact that the lives of those who are ill and suffering – and all other human lives –are intrinsically valuable and worthy of respect.

But this post isn’t for the purpose of harping on the scandalous comment of a misguided televangelist (which is “old news” by now anyway). Reading about Robertson’s comment called to mind a Facebook note that I wrote in May of 2009, less than four months before my grandmother passed away. I pulled up the note, and after re-reading it I decided that I wanted to share it here during Respect Life month.

A lot has changed since I wrote this (for instance, the daughter that I talk about is now almost four years old, and I have another daughter who is 14 months), but the message of the note remains exactly the same. Here is a slightly edited version:

I love being a mother. I am humbled and awed that God has given to me the important job of caring for another human life – body and especially soul. And I am grateful for the chance not only to teach my daughter (and hoped-for future children), but to learn from her as well. After all, Jesus said that children are our role models. Unless we become like children, we have no chance at Heaven (Matthew 18:3).

What did Jesus mean by this? What can my daughter teach me, especially about getting into Heaven? At 15 months old, she does not have a lot to teach me about patience or swift obedience. She can’t model a good prayer or sacramental life. But today, I caught a glimpse of one of the ways I—and the rest of the world—should be emulating my daughter, especially in this “culture of death.”

I have an ailing grandmother who is over 90 years old. She has had many health problems, the most devastating of which has been the Alzheimer’s disease with which she has been afflicted for over a decade. My grandmother does not recognize me anymore. I don’t recognize her either. She sits in her wheelchair all day, repeating the same nonsensical phrases over and over; fighting with my mother and anyone else who is around; accusing us of trying to harm her; trying to leap out of her chair though she cannot walk; drooling, shaking, suffering.

To many of us “wise” adults, my grandmother’s life doesn’t make sense anymore. Her suffering is incomprehensible. Her continued existence on Earth may seem [almost] purposeless. She is perhaps the perfect “poster-child” for the pernicious pro-euthanasia and assisted suicide movement. And while I wholeheartedly reject this movement and all of its evil ideology, I can’t pretend that I have not been afflicted by the tendency to almost dismiss my grandmother… to not even bother trying to interact with her or search her eyes for the loving, intelligent, talented woman who raised my mom and who is still in there, somewhere. Of this, I am ashamed.

And then there’s Rose. Somehow, my daughter who is barely older than a year, has found in my grandmother’s

life the worth and beauty that most of the rest of the world would fail to recognize at this point. Rose adores my grandmother. She has demonstrated this repeatedly when we have visited my parents’ house, where my grandmother lives. Today, she was especially interested in my grandmother; she was simply drawn to her. Rose wanted to hold her hand and give her kisses, sit in her lap and babble to her – desires which my grandmother happily obliged by kissing Rose back, gripping her hand as tightly as she could, and reaching out to pick her up (even though she is unable to do so). Though Rose often became distracted by other things, as 15 month olds will do, she kept coming back to my grandmother’s wheelchair and staring up at her with the biggest, warmest smile, reaching out to hold her hands. At one point, my mother removed Rose from my grandmother’s lap and Rose struggled and whined – she wanted to go back.

Rose doesn’t seem to notice my grandmother’s wrinkled skin and sunken features. She doesn’t realize that my grandmother often thinks that Rose is her own child, and/or that Rose’s mommy (me) is herself just a child too young to care for Rose. Rose has no idea what Alzheimer’s is, or how it has erased almost all traces of the mother and grandmother we all have loved our whole lives. She doesn’t care that grandma can’t take care of herself or that she endlessly repeats herself like a broken record . And she doesn’t know that my grandmother no longer can reason. My grandmother doesn’t have much, if any, use of that gift which is one of the distinguishing elements of humanity; and this, to some people, would mean that her life is no longer worth living. But Rose doesn’t know what “quality of life” means (I confess that I don’t really know either), or that my grandmother would be considered by many to have such low quality that we might as well just “get rid of her.” She doesn’t know what a financial or emotional or practical “burden” is.

The only thing Rose seems to know is love. She showers my grandmother with it and draws it out of my grandmother to the same degree. Though more and more people in this world are adopting the attitude that people in my grandmother’s condition are no longer of any value, it’s obvious to me that my grandmother’s life holds great value in the innocent eyes of my daughter.

This morning, I read a 2007 Washington Post article describing an interesting experiment. Staff at The Washington Post set out to see how many rush-hour metro-riders would notice the superb violin-playing of a famous violinist disguised as a run-of-the-mill musician playing for spare dollars in a D.C. metro station. Would anyone be able to look beneath the facade of a perhaps-needy generic metro musician and recognize the piercing splendor of classical masterpieces played with inexplicable passion and talent? Would anyone be able to break out of their self-centered frantic dash to work, or to focus on anything besides their naively hopeful stop at the lotto kiosk, in recognition of the Beauty five feet away from them? The answer was basically no – very few people stopped to appreciate the music or even so much as looked in the direction of the famous violin player.

No one, that is, except for children. The people conducting the study noticed that practically every child that walked by turned their attention to the musician and even tried to stop walking to listen longer. But their parents pulled them along and even purposefully blocked their view of that seemingly crazy, needy man playing in the metro station.

This story reinforces the observations I made today while watching my daughter with my grandmother. I believe– and have seen much evidence–that in their innocence, children possess the ability to recognize meaning and beauty where the rest of us “learned” people do not. They aren’t too distracted by superficiality, selfishness, or extreme busyness to notice. They see it most especially in lives of babies—wanted or not, healthy or not, perfect or not (including the unborn ones that they can only see as a bump on mommy’s belly)—and the elderly. They don’t know or care if a human life is “wanted” or if it “makes a contribution to society.” They seem to know, intuitively, only that all human life is special. And in today’s society, where human lives are only valued for their perceived usefulness instead of for their own sake, this is one of the most important lessons that we can ever learn from Rose and other children like her. If society could only become more like little children in this particular way, we just might be able to veer off this course we’re taking to hell after all.

By the time my grandma died on September 2, 2009, she was in many ways as much of a baby as Rose was. She needed to be fed, bathed, clothed, and constantly watched over. I’m sure it was not how she wanted to live her life, but I can’t help but think that she was blessed to have been returned to a state of childlike innocence and dependence — to become like a little child just as Jesus says we should do.  I can’t help but think that this was a means of her sanctification and ultimate salvation. I also think that her childlike state was a blessing and a means of sanctification for those who cared for her; Jesus also said, “Whoever receives one child such as this in my name, receives me; and whoever receives me, receives not me but the One who sent me.” (Mark 9:37). We please the Lord and orient ourselves toward Heaven by welcoming, feeding, clothing and comforting the “least of his people” – not by selfishly abandoning them in their hour of need.

7 Replies to “A Child Shall Lead Them”