Being Vulnerable for the Sake of Her Soul 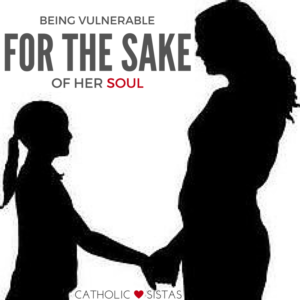 A week ago, I shared with my 14-year-old daughter that I live with same-sex attraction (SSA).

Why? Because despite receiving thorough catechesis on sex and marriage (we’ve studied John Paul II’s “theology of the body” for years), she was still struggling to accept that people attracted to their own sex ought to be chaste. While she understood the what and even the why of the Church’s teaching on sexuality, the knowledge was academic for her. (As it should be at that age.)

Years ago, I was sure I’d take this information to my grave. I imagined my adult children finding my journals, articles, and emails after I’d died, and being surprised to learn that their mother had struggled with homosexuality. More importantly, I hoped they see beyond the struggle to its outcome–that through Christ, I had won the battle for chastity.

Then I witnessed the widespread celebration of the Supreme Court ruling that legalized gay marriage, with rainbows being touted not just from secularists and (bizarrely) corporations, but from self-proclaimed Christians and even churchgoing Catholics. I saw the vitriol directed at social scientist Mark Regnerus when he published a study showing that children raised by same-sex parents did show negative psychological effects over those raised by a mother and father. I’ve seen states trample the religious liberties of Christian citizens by enacting legislation that makes it discriminatory NOT to participate in gay marriages as a photographer, baker, or civil servant.

I’ve gradually watched the chilling effect of political correctness that arose in my own Generation X evolve into what can only be called ideological despotism, with pro-gay marriage supporters willing to virtually crucify anyone who even thinks it’s wrong. And I know it’s only going to get worse as her generation takes up more positions of authority in society, as nearly half of Millennials believe the government should have the power to stop people from saying offensive things about minority groups, according to a disturbing Pew Research Center study.

I prayed about whether to share such information with my daughter for a long time. I talked to my husband, and sought the counsel of a dozen close Catholic friends. Though a few believed telling her at 14 was unnecessary or premature, it was the words of a seasoned mother of adult children whose hard-won wisdom articulated my own deep fears and motivations:

My husband and I have found that the outside world becomes much louder than our quiet voices when it comes to matters like this. We’ve always taught our children that homosexuality is not a sin in itself. but when acted upon is a sin. Then our oldest children went into the world and others began telling them how wrong we are, some pointing out that they are living a homosexual lifestyle and they are “just fine.” Because we weren’t very vocal, nor did we have the experience to back up what we were saying, our oldest children don’t believe the Truth about homosexuality. The reality is, if the world gets to your daughter first, she may shut out your experiences because she will have a plethora of others telling her differently.

So I decided to tell her. I waited for the Holy Spirit to provide the right time and then it arrived one night when the two of us were alone in her room, having good conversations over tea, with hours ahead of us before bedtime. Even though my daughter is one of the kindest souls I know, my heart still beat painfully as I prepared to tell her.

I was surprised by how difficult it was for me to talk about this part of myself with her. Not because I carry shame about it; I’ve long since accepted that my SSA is simply the wound God allows to keep me close to Him. But I’ve listened to straight Catholics who don’t know about my homosexuality talk about “those people” with obvious disgust. They see diabolical agents of Satan where I see wounded souls. I’m discriminating about who I tell and so far, everyone has responded kindly. (Eventually, it’s a non-issue because mature Catholics understand that everyone is broken in some way.)

But this was my daughter, the beautiful child I’d loved as soon as I’d known she existed. I’m blessed to have a close, loving relationship with her (yes, even at 14) and I was scared she would see me differently and that closeness would be damaged. This was a bell I couldn’t unring. But I’d decided that shoring up her faith was worth the risk to me personally. Finally, I just told her:

“I need you to know something important about me. You know I treasure your father and we have a wonderful marriage. But if he died tomorrow and I was single again, I would probably define myself as a gay Catholic woman.”

Her eyes got round with surprise. She cocked her head to the side. “Does Dad know?”

I almost laughed. No, I’ve hidden this from your father–my best friend–for 20 years. I thought I’d share it with my teenage daughter first! But instead I just said, “Of course.”

It ended up being a beautiful, heartfelt conversation, as those orchestrated by the Holy Spirit usually are. She asked me about when, and how long, and who. And if I’m still tempted. And why.

“Yes,” I said. “But not as strongly or as often anymore.” I explained that the strongest temptation comes when I neglect my relationship with God. “When I rely on Jesus to give me the grace to remain chaste and faithful to my marriage, it’s just a teeny tiny struggle for me,” I said. “That’s one important reason I try to stay so close to Him.”

After many tears (mine) and much discussion, she looked at me with a dawning awareness. “I get it, Mom…you don’t expect anyone else to do something you aren’t living out yourself. Even if they choose not to, you prove that it’s possible to be chaste.” I could almost see the Truth sink from her head down into her heart and take root there. Then my tears were happy ones, as I realized why God had prompted me to take such an intimate, scary risk. (For the record, things are still normal between us.)

My daughter is young; there’s no guarantee she’ll remain faithful to the Lord for the rest of her life. She may move away and reject the Church’s teaching out of a misguided attempt to avoid hurting her gay friends. If that happens, I’ll have peace that I did all I could to help her accept the truth about human sexuality. I’ll have hope, too, that one day the seeds of Truth I planted the night I chose to be vulnerable for her sake can still one day bloom into a sincere and lasting faith.