UP and Out of The Fog 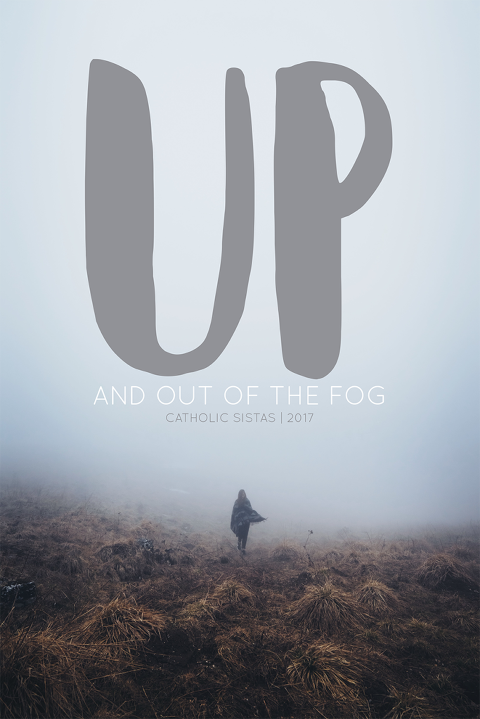 It’s funny–I didn’t realize there was a fog to come up out of until I looked back. I thought it was normal – you know, to feel super tired, with no desire to do anything but lay around and binge-watch Tiny Houses on HGTV. It was easy to justify, after all: I was pregnant and in my first trimester…this was my first pregnancy after three consecutive losses…I had six children who were either working, homeschooling with me, or in preschool.

Who WOULDN’T have been tired?

And I was so tired.

Add to that, I was “advanced maternal age” now–I had just turned 40 when we found out we were expecting. While I cherished every moment of my pregnancy, in the back of my mind was the constant whirling anxiety of what-ifs:

“How would the children take it?”

“Can I bear the looks of sadness on my children’s faces?

Especially the five-year-old, who will have even more sorrow in her heart at such a young age?”

“Can I bear the pain of losing another child again?”

I remember a dear friend from college messaging me repeatedly, but I was just too tired to respond. Or, so I thought. It felt overwhelming to do even the most basic daily things. Grocery shopping {from list making to going to the store, unloading at home}, cleaning – even just overseeing the kids doing their part, laundry, taking kids to their activities, even social activities for myself with friends…it all just felt insurmountable. Making dinner? Forgetaboutit. My brain just felt run down and tired. Pajamas? All day long, thankyouverymuch. I was too tired to even explain to this dear sweet friend of mine who was one of my bridesmaids in my wedding many years ago.

And the sad thing is, I really related it all to being pregnant. I was used to the normal ups and downs of life and surely this was all hormonal on top of that. But I lacked perspective–I couldn’t see how this yucky cloud was affecting everyone else around me. I knew it didn’t feel good. In addition to all that…head pressure, I was experiencing severe suffering from a typical pregnancy symptom: heartburn. I have had it with all of my kiddos and it gets progressively worse with each pregnancy. This pregnancy was no different and I was desperate for relief.

Then one day, I asked about heartburn solutions in an online Catholic support group. A friend recommended something I wouldn’t have considered – watching a video about the connection between salt and water. It was a YouTube video and it was an hour loooooooooong. But you know what? I watched that video and couldn’t stop. The woman in the video was a former psychiatric nurse turned nutritionist, and what she shared was just basic chemistry as it related to the body. But mostly I watched because it didn’t require me to move. 😉

In the video, she explained that the body needs the right kind of salt – ok, I had heard this before – and that combined with water, helps the body to properly hydrate. Ok, how does this fix heartburn? I had no idea, but I was in such pain, I was willing to try anything. I ordered the Celtic sea salt and had a stern talk with myself, which sounded a lot like a mom admonishing the petulant child.

You WILL take this salt. What have you got to lose? And you WILL drink more water!

I don’t want to hear any complaining, Miss!

So, I dutifully made myself take the salt every other glass of water. Not to sound clickbaity, but what happened next was really unexpected. The heartburn dissipated within a day or so, but that was only the beginning. The salt was causing me to crave the water and without any real effort, I gave up my beloved coffee and even my daily Coke. (Which was a good thing because the trips to Sonic for my Route 44 Coke, easy on the ice, was killing my wallet!)

I actually wanted the water…and a LOT of it – craziness, I know!

But the most profound change I noticed with the water and salt was this gradual feeling of…let’s call them layers – that’s the best way for me to really explain how it felt – that were lifted up and off of me. The brain fog that had been so heavy and dense around me, holding my desire to do anything hostage, started to disappear. Each day the heaviness lifted a bit more. I had more clarity. Each day felt a bit lighter – I felt like I had both the energy and desire to get out of bed and actually do everyday things. And even though I was still physically exhausted, I felt like for the first time in a good long while that my head felt clear enough that I could think.

PSA: I wouldn’t necessarily call myself crunchy, but I’m also not a straight-up allopathic medicine kind of gal. Like most other things in my life, I like a balance, and I see where each type of treatment, be it homeopathic or allopathic, is necessary and useful. But to be clear, let’s just get this straight – if I break my arm, I’m not going to be reaching for an essential oil to heal the break. I will be heading to the ER to get my arm set and cast. Likewise, when I caught the flu, I chose instead of taking a script to take Elderberry syrup. Healing can come by many avenues and the decision to do each, and or both, varies from person to person and illness to illness.

It took a full week of taking the salt and water to fully drift up and out of that fog, but once I did, I watched that video again. I also looked at the minerals found in Celtic sea salt and one jumped out at me: magnesium. I had tried taking magnesium before to help with stress and anxiety, but the pills were just too large. Friends had recommended a magnesium powder, but I just never got around to it because I couldn’t imagine sticking with it. But everything I read about magnesium pointed to many, many folks being deficient in this mineral. Magnesium deficiency is a contributing factor for all sorts of conditions, from osteoporosis to blood pressure to inflammation. And yes, it’s even related to psychological disorders such as anxiety, stress, and depression.

The biggest difference I noticed after taking the salt was just after our rainbow baby–our first baby born after the heartbreak of three miscarriages–was born in January 2017, I did not experience any level of baby blues. I say this only because I thought it was odd and I thought it was normal that everyone experiences some amount of stress due to hormones and the change in family dynamic – it seemed perfectly normal that anyone would have a low after a baby is born. What I found extremely unusual was that two weeks after Emmie was born, chicken pox and the flu went through the house. So, stressors were everywhere. And while it was stressful and there were moments when it felt overwhelming, it never felt like sadness or depression.

Taking the salt no longer was just about heartburn – it seemed like a Godsend, something I felt compelled to take, not just for my own sake, but for the sake of my family who needed me. Just after prayer, there was my salt. It was truly fundamental for my well-being. And it made sense. Of course, God, Creator of all things good, would provide ordinary, everyday things that could* be instruments of healing. Afterall, Jesus put mud on the eyes of the blind man, He gave us sacramentals to use, such as bread, wine, oil, and water to spiritually heal. Is it really so strange, I thought to myself, that something that seems so ordinary–salt–would have such a profound positive impact on physical health? 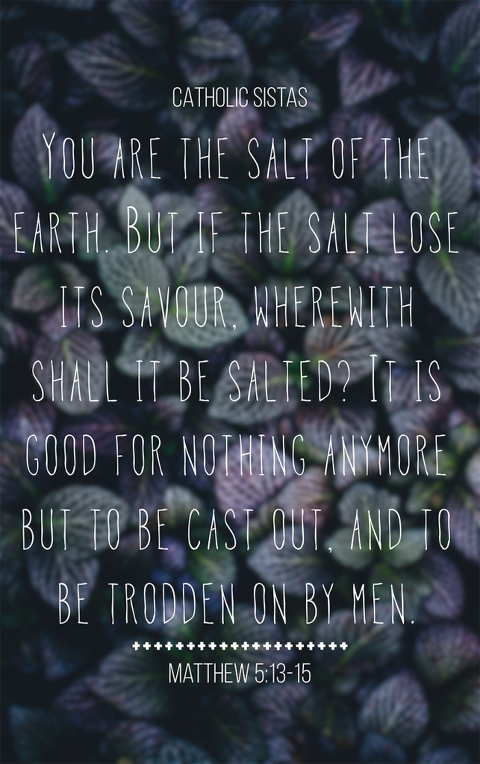 As a result, I’ve become a huge advocate for taking Celtic sea salt for friends who suffer from the same maladies and who have had equally good success as well. I have to stress these are just our own personal stories. I am not a doctor and I am not offering medical advice in lieu of your own doctor’s advice. I am sharing my own story in the hopes that someone else might be able to benefit the way I did and still do. When people opine about the psychiatric drugs that are intended to help with depression and anxiety and they are having a tough time finding the right one, I tend to sympathize with not being able to find something that doesn’t work, and from that, I end up recommending the salt because 1) it’s cheaper than any drug out there, and 2) because drugs are more of an art form than science, it can often take a long time to find a medication that works, oftentimes leaving one in a state of despair and seeking relief in any place possible. Again, the salt is not something I recommend in lieu of medication, but I always like to suggest it as a first avenue to explore because the results {if it’s going to work for someone} are often felt within that first 24 hours {this is based on my own experience as well as the experience that has been relayed to me from friends who have also used the salt}.

*Just to reiterate, I am in no way suggesting people take salt in lieu of drugs, but instead try the salt first *OR* along with any medications you may already take if you are not experiencing relief from your medication regiment. I AM NOT suggesting you stop taking medication, ok? 🙂

If you are someone who has found taking Celtic Sea Salt beneficial in the same ways – or even different ways! – please comment below.

VIDEO ON SALT AND WATER 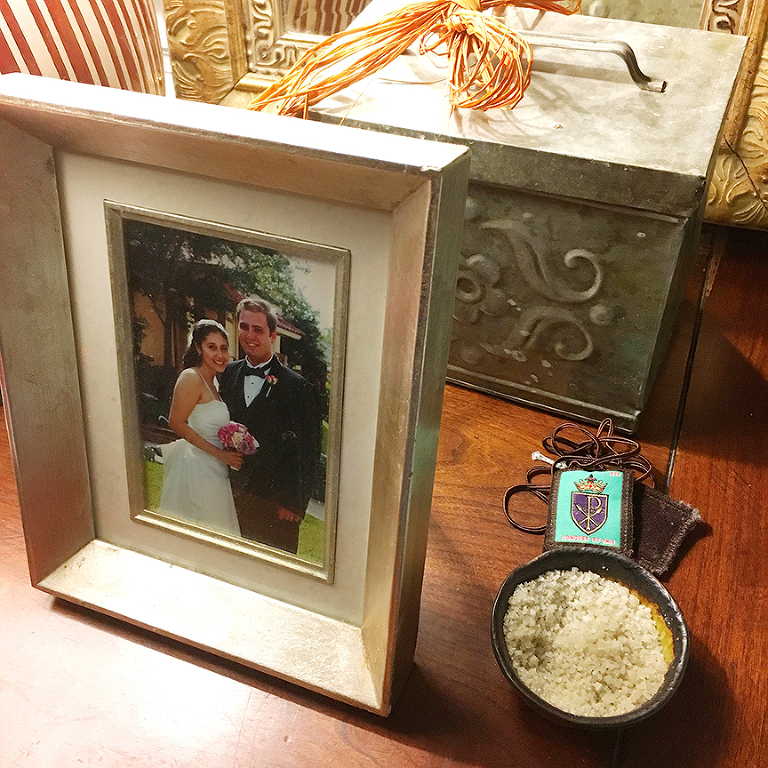 To start, I took a teensy pinch of salt, followed by drinking a whole glass of water. I took the salt with every other glass of water for a week. Once I felt like the fog was gone, I tapered down to once in the morning and once in the evening. I keep a pinch pot of coarse salt next to my bed – the visual reminder helps me to remember. I have taken it every day for the past year and a half. When times are more stressful, such as the holidays and other busy times of year, I take more salt.

LIST OF MINERALS AND TRACE ELEMENTS FOUND IN CSS

If you are someone who suffers from depression, anxiety, or mood disorders, please refer to our list of resources to help you. God bless.

« All Things Visible and InvisibleIt Really IS That Simple »