“What do you think?  If a man has a hundred sheep, and one of them has gone astray, does he not leave the ninety-nine on the mountains and go in search of the one that went astray? And if he finds it, truly, I say to you, he rejoices over it more than over the ninety-nine that never went astray.”  Matthew18:12-13

I’ve never been a great fan of the rosary (at least not until recently), but desperation sometimes drives us to do things we might not ordinarily consider.  A couple of years ago, I had a serious dilemma regarding our schooling choices.  I’d been struggling with this decision for some time without making any progress, so it was time to bring out the “big guns”: a rosary novena toSt. Joseph. 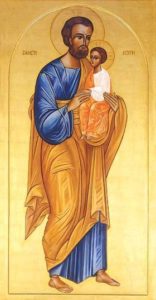 Each morning I got up early and went out to walk, rosary in hand.  The route never varied; I went back and forth, back and forth on our gravel driveway— a tenth of a mile each direction.  It was spring, and the mornings were often chilly.  I wore a cheap pair of knit gloves to warm my fingers as I counted down the beads. One morning, wire from the rosary caught in the threads of my glove.  I tried disentangling the two, but in my haste I ripped my glove and broke the rosary.  Miffed, I shoved the rosary into my pocket and finished my walk counting prayers on my fingers.

Later, I brought out the rosary to repair the chain.  As I began putting it together, I realized with distress that not only had the chain broken, but an entire bead had fallen off.  In desperation, I searched my pockets—but no bead.  I ran to the driveway, to the spot where I had been standing when the rosary broke.  My eyes frantically searched the endless tiny, bead-sized stones which lay underfoot.  My bead was a bright, turquoise blue, but it was nowhere to be seen.

I should explain a little about this rosary.  After all, I wouldn’t go on a desperate hunt for just any rosary bead; this one was special.  A few years prior, my parents had visited Rome.  They are not Catholic, but knowing something of my love for the Holy Father, they purchased a John Paul II rosary as a souvenir for me.  It was a thoughtful and meaningful gift.  The beads themselves looked like authentic turquoise stones.  The rosary had the particular “bent” crucifix that the Holy Father favored, and a medal that featured the John Paul II on one side and Our Lady of Czestochowa on the other.  It was the first sacramental that I had ever treasured.  Now, part of it was lost among the rocks of my driveway.

I prayed.  “Lord, I know this is such a small thing.  It’s less than insignificant.  But you know that it is important to me.  Father, if it isn’t too much to ask…could you please help me find my bead?”

The next morning as I walked, I again stopped at the scene of the disaster.  My eyes scoured the pebbles, but found nothing.  I continued the walk, always pausing to look for the bead in the spot where it had fallen.  Then suddenly, as I passed yet again, my eyes were riveted to one tiny blue speck—my bead!  The lost bead was found!

Now–ahem–here’s where the story gets a bit quirky.  I was so overjoyed to have found my bead that, naturally, I did not wish to be careless with it.  I knew better than to put it in my pocket, where it might bounce out.  I thought of the most secure place I knew: my vise-like sports bra.  There, without any doubt, it would be safe.  I tucked the bead away, and resumed my walk as though I were on a cloud.  What a miracle!  The bead had been found!

Surely you can guess what happened.   My hiding place wasn’t as iron-clad as I had thought.  When I went inside after my walk, I discovered that the bead had slipped out and was now lost on the driveway.  Again.  And this time, I had no idea where it had fallen. 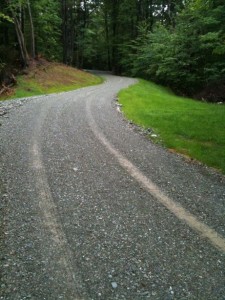 As I walked the next morning, I spent the first few trips up and down the drive with my eyes glued to the ground, scanning from side to side, vainly hoping to see that tiny turquoise troublemaker.  But it didn’t take long to realize that mine was an impossible cause.  One-tenth of a mile, solidly covered with rocks and pebbles—I’d gotten one miracle, but my bead would not be found again.

Beyond this discouragement, my mind was still very disturbed over the school decision that had to be made.  Option one was my favored path.  Yet I had a relentless, nagging thought that I should consider option two–which for several reasons was highly distasteful to me.  I wanted nothing to do with it, but it stayed firmly planted in my mind as something I must consider.  It was this that had brought me to the novena.

I chose a novena to St. Joseph because St. Teresa of Avila had a special devotion him, saying (among other things),

“I am astonished at the great favors which God has bestowed on me through this blessed saint, and at the perils from which He has freed me, both in body and in soul.”

For good measure, she added,

“I only beg, for the love of God, that anyone who does not believe me will put what I say to the test, and he will see by experience what great advantages come from his commending himself to this glorious patriarch and having devotion to him.“ 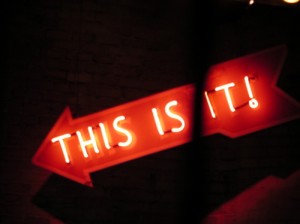 I took her at her word and put my whole heart into the novena.  I wasn’t hearing any special revelations, though, and the novena was drawing near an end.  I often pray that God will send a neon sign, so that I can clearly see what it is He wants—it’s a “leave no doubt” strategy that I like.  But no flashing orange signal was appearing in the heavens to illuminate my way.  I was still strongly attached to my school plan and could not bear to think of the other.

Finally, I reached the last day of the novena.  During my previous walks, I had spent most of my time arguing with God, explaining why my way was best and the other way was not possible.  However, this day as I walked, something in my spirit changed.  I submitted.  At long last, I prayed the words, “Thy will be done.”   I don’t want the other plan, Lord, but I will do it if you want me to.

At that precise moment, I glanced down at the driveway.  There had been rain during the night, and the earth was still freshly wet.  My eyes lit upon a tiny blue speck, half buried in the sandy mud, a tire track visible around it.  I bent down and gently extracted my bead.  The turquoise, which I had always assumed was polished stone, was peeled away, revealing the cheap plastic underneath—but that didn’t matter.  I stood there, stunned, holding my precious lost bead, and it was then that I clearly heard God’s voice:  “Do you not see how much I care about you?  If you can trust me to give you this bead, can you not trust me in all things?”

“Look at the birds of the air: they neither sow nor reap nor gather into barns, and yet your heavenly Father feeds them. Are you not of more value than they?”   Matthew 6:26

*The Autobiography of St. Teresa ofAvila

9 Replies to “The Miracle of the Bead”