The Case Against Teenage Dating 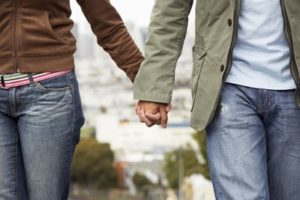 I have a confession to make. Several, actually. At least once a week, I’m too tired to cook so I let my kids “forage” for dinner. We eat condensed soup from a can–sometimes, literally from the can. At least a few days a week, we  stay in pajamas until noon…okay, all day. We only clean the house really well when company is coming. And–try not to gasp–I not only let my kids watch Spongebob, but I watch it with them.

As a Catholic homeschooling mom, I’ve known for a while I’m probably more slack than most with my kids. And I’m okay with that, because I LOVE our jello-for-dinner and Spongebob-laden family culture. But there’s one decision my husband and I have made as parents that’s decidedly countercultural, and will no doubt earn us the title of “Freakish Catholic Zealots” as our kids get older: we’re NOT going to allow our teenage children to date.

Why? Because there’s really only one legitimate–and by that, I mean edifying–purpose to dating: to find a spouse. And unless a person is certain he’s called to marriage at a very young age, nothing spiritually or emotionally good comes from dating in your teens.

I felt called to write about this because it seems kids today are dating at earlier and earlier ages. Call me old fashioned, but it’s shocking to hear kids as young at 10 or 12 are “dating” or more scarily, “hooking up.” Yet what surprises me even more is that often, it’s the parents who allow and even encourage this.

A few months ago, I saw someone post pictures on Facebook of “spa day” with her 10-year-old daughter. The day–complete with manicure and newly highlighted hair for the daughter–was to prepare the girl for her first date with a classmate. A few days later, Mom posted pictures of the happy couple on their “first date” at a pizza parlor.

The girl was in FOURTH GRADE; she hadn’t even hit puberty yet. And she’s “dating?” The only explanation I had was that the mom was especially anxious to be a grandmother.

Let’s think about what happens when you do start dating “the love of your life” at 11. A friend’s 12-year-old daughter came to her a few years ago and asked permission to have a boyfriend. Being the norm among her peers, naturally she wanted one, too. (Sorta like an iPhone.)

My friend wisely asked, “If you have a boyfriend at 12, what’s left for later? If you start dating now, what’s left to happen later, say, in three or four years?”

“I’ll have a deeper relationship with him then,” said the girl.

My friend showed marvelous restraint at this point and didn’t burst out laughing (or, as I would have, started yelling) at her sweet, innocent daughter’s naivete. She instead calmly explained that a “deeper relationship” to most teenagers (especially the “in love” ones) almost always means one thing: sex.

“Sweetheart, boys and girls are so pressured into thinking that the way you express ‘deeper love’ is to share your body. That’s so dangerous for many reasons, but the most important is that it puts your very soul in mortal danger.” She added, “When you’ve been romantically involved with someone for years, you WANT to show him how much you love him. You WANT to be with them physically. But it’s not like you can get married when you’re 16.”

This mom is right. We’re designed by God to bond not just emotionally, but physically. Yet if we want our kids to save the total gift of themselves for their spouse, why put them in situations with adult-sized temptations that they’re ill-equipped–emotionally or spiritually–to handle?

Teens who lack adult guidance or supervision, who are lonely, or who suffer low self-esteem are especially vulnerable to the temptation to have sex while dating. For these kids, the risk of being pregnant or contracting an STD is almost entirely eclipsed by their desperate desire to feel loved and attractive.

Some parents take the middle road and allow “courting,” where older teens are allowed to spend time with the opposite sex in situations designed to build friendship first. The teens spend time with one another in a group, either of friends or family. Private time together is limited, if allowed at all. And even then, it’s usually only allowed under the watchful eyes of adult chaperones.

It’s true that courting typically doesn’t expose teens to the same physical risks as dating. But I still don’t see the point, unless your child is convinced they’re called to the vocation of marriage and called to that vocation especially early in life. As my friend said to her daughter, what’s the point of developing a romantic relationship when marriage realistically isn’t in the cards?

Most parents today have succumbed to the idea that dating is an acceptable recreational activity on the way to being mature enough to get married. Beneath this is the misguided idea that it’s better for young people to “try on” several relationships (and let’s be honest–partners) before settling down. “You wouldn’t buy a car without test driving it, would you?” is the analogy I’ve heard most often, as if getting married is the equivalent of picking out the best model.

Things have changed dramatically since the days when unmarried young people hid their sexual activity from parents. Today, a disturbing number of parents are more likely to encourage their kids to have premarital sex than to condemn them for it. My late mother-in-law, for example, once said she was glad her college-aged daughter was sexually active so she could “make sure she doesn’t marry someone she’s not sexually compatible with.” Never mind that the intensity and euphoria of a sexual relationship can blind you to the other person’s selfishness and immaturity, opposite traits of what you should be seeking in a spouse. (And don’t even get me started about contraception’s impact on our ability to choose a good spouse.)

Allowing teens to engage in emotionally intense relationships is fraught with danger, and I’m not just talking about the sexual risks. More damaging, in my opinion, is the emotional consequences of recreational dating. Teens who date develop romantic attachments…romantic attachments that inevitably end. These attachments can be profoundly intense, even when they don’t involve sex. A teenager opens her heart to someone who says, “I love you…until I don’t.” And when it does end, her heart is wounded. She’ll open it again, most likely, when the next guy comes along, but certainly not as fully as she did that first time. And with each breakup, her ability to trust and believe she deserves unconditional love will be eroded.

Then one day she’ll meet the person God intended for her all along. And then that man, who deserves full access to his wife’s heart, must instead spend years if not decades taking down the wall around his beloved’s heart, brick by brick. The one she built up to protect herself after each fresh promise of unconditional love evaporated. Sexual compatibility may get you into a marriage, but only love, vulnerability, and trust will keep you in one.

From the time our kids were three or four, we’ve stressed that they need to ask God what vocation He has planned for them: marriage, the single life, or the consecrated life. For most of them, the call is likely to be marriage. But individually, we don’t know that and neither do they at 12, 15, or 17 years old. Not only does allowing teens to date expose them to very real emotional, physical, and spiritual dangers, but it distracts our children from being able to discern if they’re even truly called to marriage in the first place. When you get on the dating track so young and experience all the euphoria of “falling in love” (again and again), it’s just going to be harder to hear God’s call to any other vocation.

Right now, our oldest is just 10, so we haven’t faced down the dating demons just yet. Given the peer pressure out there for today’s teens to date, we aren’t naive enough to think all our kids will accept this family policy with gratitude. With at least a few of them, we anticipate some knock-down, drag-out fights about it. Not to worry, though–we’re already investigating convents for the especially resistant. (We’re leaning toward the ones with 12-foot walls.) We’ll probably get some grief from other parents, too, who think we’re depriving our children of a normal childhood. But honestly, after having been Catholic for a decade, we’re used to that accusation.

We want our kids to have the freedom to figure out who they are during the teenage years, and to accept that regardless of peer pressure. We want them to grow their relationship with God, so that when they leave us, they’ll have a foundation that will carry them through life with the Lord and on to heaven. It’s much harder to focus on God and where’s He’s leading you, though, when you’re distracted by immature romantic entanglements and all the drama and pain that comes from them.

Seasoned parents know they have to pick their battles. (I obviously surrendered on the Spongebob and getting dressed every day one.) But for my husband and I, witnessing and experiencing the bitter fruits of recreational dating has made this one hill we’re prepared to die on.