Thanksgiving in the Eucharist: Reflections on the Gospel of John 6 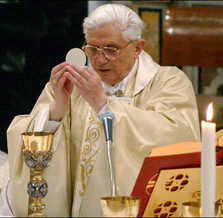 The word Eucharist literally means “thanksgiving” and since tomorrow is Thanksgiving Day in the United States I couldn’t help but use this time to write reflect the Eucharist! There are several places in the Bible to turn to for proper catechesis on the the Blessed Sacrament, and for today I will be sharing my thoughts on and love for the Gospel of John, chapter six.  This chapter of John is simply amazing.  It is a treasure trove of support for the Real Presence in the Eucharist, and I certainly haven’t uncovered it all so I look forward to learning more!

Open John 6 in another tab to reference and read along!

This chapter of John is not actually at the Last Supper, that comes later along the time line.  For the most profound things Jesus did in His Earthly ministry He prepared His disciples ahead of time and told them what to expect.  For instance, Jesus forewarns His disciples that He must die but that He will rise again (Matt 16:21), and He also forewarns that the Holy Spirit will be sent to teach and guide the Church (Jn 14:26) , which is later sent at Pentecost.  In this similar pattern we see Jesus prepare His disciples for the profound miraculous nature of the institution of the Eucharist. 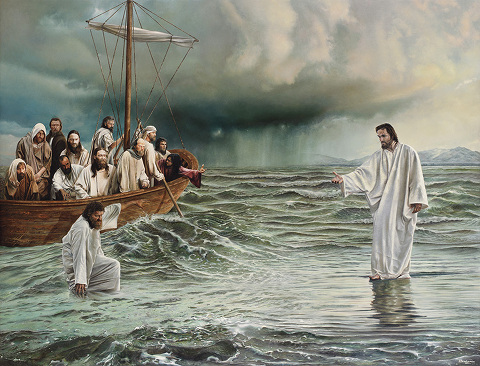 John 6 first contains descriptions of two of Jesus’ miracles, a multiplication of loaves and His walking on water.  So Jesus is opening the disciples’ eyes to the miracles He’ll be performing in the institution of the Eucharist by demonstrating first that He can do miraculous things with bread in the multiplication of the loaves, and later He demonstrates that He can do miraculous things with His body, by walking on water.

Next, I love how a reference to God feeding the Israelites in the desert by raining manna from Heaven precedes Jesus’ discourse on eternal life.  How easy is it to believe that little flakes of bread rained down for 40 years?  Jesus came with a new covenant, so even more miraculous than raining bread is the Real Presence of Christ in the Eucharist.  Jesus uses this reference to the manna to introduce the Eucharist, He proclaims, “I am the bread that came down from heaven.”

In the Old Testament signs of faith were very physical, such as the raining of manna and even the Passover Feast of sacrificing a perfect lamb for God, adorning the door of a believer’s home with the blood of the lamb then eating it (for fun, reflect on how the Passover Feast relates to the raining of manna).  Jesus continues this physical sign of faith in the new covenant, charging ahead with very physical words.

1) “I am the living bread that came down from heaven; whoever eats this bread will live forever; and the bread that I will give is my flesh for the life of the world.” 51
2) “I say to you, unless you eat the flesh of the Son of Man and drink his blood, you do not have life within you.”53
3) “Whoever eats my flesh and drinks my blood has eternal life.” 54
4) “For my flesh is true food, and my blood is true drink” 55
5) “Whoever eats my flesh and drinks my blood remains in me and I in him. “ 56
6) “I have life because of the Father, so also the one who feeds on me will have life because of me.” 57

Jesus pounded the crowd with very literal and vibrant words, repeating Himself because He knew how hard this teaching was to accept.  Jesus spoke of flesh many times in the Gospels, but by context the use means “humanly” or “earthly”, much like how He uses the word flesh in verse 63 “It is the spirit that gives life, while the flesh is of no avail.”  Meanwhile the rest of the references in this passage to flesh He takes ownership of, “my flesh”, “the flesh of the Son of Man”.  In fact, as far as I am aware, the only times recorded in the Gospels that Jesus speaks of His own flesh is when He commands us to eat it.  How unnerving this must have been to hear! 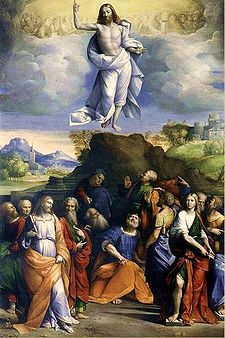 The ascension of Jesus

If I had been amongst the disciples I doubt my my astonishment would have been so gently expressed as “This saying is hard; who can accept it?”(61).   Jesus replied curtly “Does this shock you?”  Well… YES!  It IS shocking!  No Christian wants to believe anything against the teachings of Christ.   I’ve seen it argued that so many disciples left not because they understood Jesus to be saying to literally eat His flesh, but that they understood Him to be saying that He was God and that’s why they left.  This is definitely intellectually easier to swallow.  By our sinful nature we can’t help but think of ourselves as true followers of Christ compared to those who left Him in this passage.  We tend to consider ourselves more advanced and more intelligent than previous generations, especially those from thousands of years ago.  For some, it may even be intellectually embarrassing to admit to believing that the little host and cup of wine the priest is holding up during the consecration are anything more than “a cracker and grape juice”.  So, we see many Catholics abandoning the belief in the Real Presence, because to this day, this saying is hard… truly, who can accept it?

“What if you were to see the Son of Man ascending to where he was before?” (62) I find it interesting that Jesus uses His Ascension as the example for difficult belief, because this is still difficult to explain today.  For instance if He’d said, “What if you were to see the Son of Man die and come back to life three days later?” well, in today’s world we’d just be able to dismiss this as a medical miracle.  Maybe the tomb had been so cold as to lower His temperature enough that He was in some sort of state of suspended animation.  However, we still have no ability to explain Jesus ascending to Heaven.  This still takes a seemingly gullible amount of faith to believe in.  About as gullible as it seems to believe that the bread and wine are authentically the body, blood, soul and divinity of God’s dearly beloved Son.

Jesus, being infinitely wise, made sure to issue the disclaimer that only a select few would believe Him.  Jesus speaks of those in disbelief, “For this reason I have told you that no one can come to me unless it is granted him by my Father.” (65) which is a call back to “For this is the will of my Father, that everyone who sees the Son and believes in him may have eternal life, and I shall raise him [on] the last day.” (40)  Jesus joins with the condition of believing in Him seeing Him.  The only way for this amazing statement of salvation to be binding on people of all generations is for us to be able to see Him in the Eucharist.

At every mass in every Catholic Church every day around the world we can approach Jesus in the Blessed Sacrament on bended knee and give Him proper thanks.  We know that Jesus is present to our souls at all times, but it is in the Blessed Sacrament that Jesus makes Himself present to our bodies – the bodies He gave us to separate us from the angels, and the bodies He’ll reunite with our souls upon His second coming.  Thanks be to God for the institution of the Eucharist. 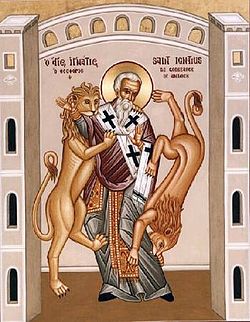 St. Ignatius learned from St. John the Apostle directly and was martyred in a death sentence by lions in Colosseum.

“Take note of those who hold heterodox opinions on the grace of Jesus Christ, which have come to us, and see how contrary their opinions are to the mind of God…. They abstain from the Eucharist and from prayer because they do not confess that the Eucharist is the flesh of our Savior Jesus Christ, flesh that suffered for our sins and that the Father, in his goodness, raised up again.  They who deny the gift of God are perishing in their disputes.”
~ St. Ignatius of Antioch, Letter to the Smyrnaeans, A.D. 110  (this guy learned from the Apostle John himself!)

“If the Lord were from other than the Father, how could he rightly take bread, which is of the same creation as our own, and confess it to be his body and affirm that the mixture in the cup is his blood?”
~ St. Irenaeus of Lyons, Against Heresies, A.D. 189

“What you see is the bread and the chalice; that is what your own eyes report to you.  But your faith obliges you to accept that the bread is the body of Christ and the chalice is the blood of Christ.  This has been said very briefly, which may perhaps be sufficient for faith; yet faith does not desire instruction.”
~ St. Augustine of Hippo, ibid 272

« Give Thanks, Give Your LifeFrom our family to yours… »