Making the Facebook rounds recently was a photograph of a father comforting his extremely sick toddler in the shower. The photo has generated controversy, as Facebook has waffled on whether it violates its community standards against nudity.

What troubles me is how few people see the real problem with the photo–that it puts on public display a private moment of love that ought to have remained private. Which begs a bigger question: Is there anything in our lives–even the most sacred–that we prudently shield from the glare of social media?

I’m sure the mother who took the photograph had good intentions. As she’s said about the photo, “I was just overwhelmed with the scene in front of me. This man. This husband and partner and father. He was so patient and so loving and so strong with our tiny son in his lap. His whispers of reassurance to Fox, that he would be OK and that Thomas would take care of him were so steady and so honest.”

I don’t know about you, but I’ve witnessed countless intimate scenes of sacrifice from my husband toward our five children. More than once, he’s cradled them in his arms while covered in vomit, wearing nothing but boxers, because they woke him up with the flu in the middle of the night. He’s cared for them while throwing up himself. He’s wrapped himself around them on the floor or held them in the shower to combat respiratory illnesses or cradled them in the bath while they’re infants.

Yet never once did it occur to me to not only document those moments, but to display them to the world.

When Facebook first arrived, I joined up just like everyone else. But as the years have marched by, I’ve dialed back my participation to almost nothing. Mainly because I saw the platform nurturing vices of pride and self-absorption in myself and others. More troubling was how the relentless Pollyanna snapshots of other people’s lives left me feeling inadequate as a mother, wife, and even child of God. I wasn’t at all surprised to see a recent study showing that depression increases in teens with increased social media use.

We ought to consider where our obsession with documenting and displaying every moment of our lives is taking us. A revealing and massive new study showed that Millennials in particular say they value “money, fame, and image” most of all. Image–again, not surprising for a generation taught to covet others’ applause through social media.

Instead of living our lives and being enriched by our experiences, we’re more concerned with whether a moment will garner us attention and envy from others. Today, even the most personal and sacred moments of one’s life are fodder for public consumption, as evidenced by the couple that live-streamed the birth of their child on Monday. This is one area when the wisdom of our elders ought to be grasped with both hands, as shown in the first photograph.

There is an appropriate time to share intimate moments; after all, some of our most poignant and powerful images have captured life’s most profound moments for posterity. Think about the raising of the flag at Iwo Jima; the soldier kissing a nurse in Time’s Square to celebrate the end of World War II; bodies falling from the tower on 9/11. The difference is that these photos were originally anonymous; their participants had to be ferreted out and even now, few know the people captured. These images are iconic and powerful because they represent all humanity and our universal joys, sacrifices, and sufferings. 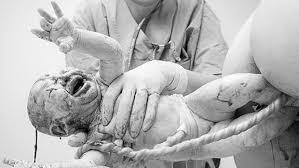 By putting the picture of her husband and son’s shower on display, however, photographer Heather Whitten limited the photo’s impact and fell prey to the narcissism so prevalent in social media. She exposed a private family moment to the harsh glare of the public, and sacrificed her son’s privacy to do so. If the photo had been shared anonymously, it would have represented all loving fathers. But instead, we got a photo highlighting one specific father’s love. What could have offered poignant insight into the human father’s great capacity for love is instead just the latest platform for self-aggrandizement.

There’s a reason we say these photos go “viral,” folks.