Much has been made of recent remarks about abortion and rape by Missouri Senate candidate Todd Akin. From President Obama to his opponent to the Democrat establishment, Akin is being vilified. He certainly could have voiced his sentiments with more tact, but the demonizing he is undergoing is disingenuous. For the record, let’s look at the offending quote without the accompanying scandal mongering.

“It seems to me, first of all, from what I understand from doctors, if it’s a legitimate rape, that’s really rare.  The female body has ways to try to shut that whole thing down,” Akin said. “The punishment ought to be on the rapist, and not in attacking the child.”

Some of the furor seems to be over Akin’s reference to “legitimate” rape. As police officers know, many reported rapes are later discovered to be false reports, while the real rapes go unreported. Akin didn’t need to differentiate between the two, but his underlying message remains intact. In fact, his last line conveys it quite well.

“The punishment ought to be on the rapist, and not in attacking the child.” 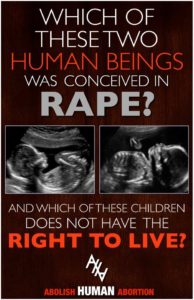 Yet there seems to be an ongoing campaign when it comes to this facet of the only genuine pro-life philosophy – the one with no exceptions. When this topic is discussed there is usually a very quick about-face and the conversation is side-tracked in a completely different direction. This time the red herring is the way the sentiment was stated. Most times the focus is also deflected away from one of the victims – the child! It’s a given that what happens to the woman is an irreparable violation of the very core of her being, yet she is not the only focus. When a child is the product of rape, two victims emerge.

As someone who has experienced the very situation of which Akin is speaking, I feel more than competent to weigh in with my own take. Some months back I shared my story, for the first time after almost 40 years, and it was both frightening and cathartic. Fortunately, my child lived and I have been immeasurably blessed because of it. While no one has the right to question or dismiss a victim of rape, we do need to consider both mother and child. As attorney Rebecca Kiessling, who was conceived from rape, states,

There is also a second victimization thrust at the woman should she conceive as a result of assault – abortion. The woman has already suffered tragically. That she should undergo another violation, just as permanent, is an unspeakably depraved suggestion. And it comes at a time when she is the most vulnerable. Killing the child within her womb will not erase the assault. In fact, it will compound her victimization. She will mourn for her child long after that child would have breathed and lived. Instead of healing, the woman will have been violated again. This fact will remain with her for a lifetime. Women who have experienced the trauma of abortion, without the violation of rape, are unable to forget. As this woman found, who aborted after becoming pregnant with her rapist’s child, it is actually much worse to live with the compounded trauma of rape AND abortion.

The crux of the true issue lies in the intent of many of those who exhibit the most outrage about this issue. They aren’t exactly known for their sympathy for the plight of women embroiled in an unplanned pregnancy. Their choice is a one way street; their support lasts only as far as the Planned Parenthood doorway. This same crowd shows no compassion for a baby girl who is aborted because of her gender. There is no emotional support to be found for the mother who finds herself in a crisis. That Planned Parenthood facilitates statutory rape of young girls with mature partners isn’t met with moral indignation. They hide behind the false shield of ‘privacy’ and fail to live up to the legal requirement to report this crime. The rights of the parents of a minor girl are also sidestepped and their vain glory comes from ‘beating the system’ and counting their thirty pieces of silver. After all, a major source of their income comes from peddling the death of babies.

Often too, the inclusion of rape/incest is a tool for getting a pro-abortion “foot in the door.” Studies show that conception by rape is a statistically low occurrence – all one time sexual contact has a conception rate of 5% or less. In truth, the vast majority of abortions have no medical basis at all. They are performed electively, often as a means of backup birth control. Abortion proponents know that using victims of rape who have conceived will make a better story to sell abortion-on-demand. Not even those who believe in the right to abortion want to admit that abortion has become a standard for the weakest of reasons or no reason at all. This, too, serves to again victimize those women who conceive from assault, as they are shamelessly used to tug at heartstrings to sell a destructive procedure to the masses.

Honesty and a clear understanding of motivating factors should be openly disclosed. True choice is about having more than one option. In a moral society, life surpasses all other goals. Life reigns supreme among our inalienable rights. Manipulating words and news reports does a disservice to society as a whole. We need more honest dialogue. Even if we don’t agree on the bottom line, I beseech the pro-choice folks to at least employ honest words and not slogans filled with misleading insinuations. In the mean time, we must educate ourselves and then proclaim the truth clearly and often. Don’t allow your silence to be the death knell for a helpless victim of circumstance. We must love them both–mother and child.  Let them live. Let them heal. And let both sides, who insist they care, show true compassion to women who suffer the horror of rape.

“For Pope Benedict, laypeople and priests don’t need to publicly renounce their Catholic faith to be apostates; they simply need to be silent when their baptism demands that they speak out, to be cowards when Jesus asks them to have courage.” ~Archbishop Charles J. Chaput, OFM Cap., of Denver