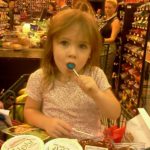 It has taken many unpleasant experiences in my life, but, after several decades, a disturbing pattern has emerged.  I am a control freak.  When I have a plan, I want to know all the variables involved and I want to control the variables so that I can guarantee that the outcome will meet my expectations.  I don’t like surprises.  And, I don’t like surprise parties.  Recently, I had one life lesson that caused me to wave a large white flag.  It was an experience that could not be matched by my peers.  I am not exaggerating.  I took a poll.  My experience came out on top.  Well, maybe a little exaggeration.  I’ll let you be the judge.

I call my life lesson, ten minutes alone with a gallon of Hershey’s syrup.  No, this is not the fulfillment of some kind of fantasy.  It started when my two toddlers and I were waiting by the door for the arrival of the three older siblings to come home from school.  There is always a bit of chaos when they arrive home.  One may be super excited about something.  One may be hungry and moody.  But, we have a routine.  You put your school things away and gather in the kitchen for a snack and chat about the day.  There is always a lot of chatter.  They give me a stack of papers to review and sign.  I get them each to tell me what they have for homework, so I can figure out who will need me and who will be able to work independently.  It was all going well until my 3 year old suddenly appeared, covered in nothing but Hershey’s syrup.

Now, I shook my head as if to shake her very appearance out of my reality.  I blinked and tried to process how this could be.  Ten minutes ago, she was not covered in Hershey’s syrup.  So, I asked my oldest to take her little sister to the bath so that mommy could inspect the house and find out what had taken place.  I walked into the den and had to gasp.  It looked like Jackson Pollock had come back from the dead, created one last masterpiece and then was murdered, violently.  From the threshold to the window sill, on each sofa cushion and splattered on the walls and windows was Hershey’s syrup.  She had even smeared some with both hands, it appears, on the television and on the picture window.   It was just the start of Advent and I almost declared, “We are cancelling Christmas!” 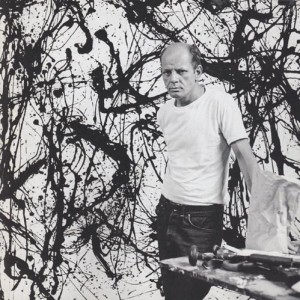 You see, I had a plan.  We had a tight schedule for the evening.  We had things to do and places to go.  This was not in the plan.  Now the school age kids were all going to have to work independently and the toddlers were supposed to be good so that mommy could scrub the den for two solid hours.  Yeah right.  Cue the tears of defeat and self pity.  Sobs, really.

“Mommy is not hurt or sad.  She is just feeling sorry for herself because she has to clean up this mess.”  I had to keep repeating it. That seemed to satisfy the three older children who were bewildered.  They wondered why I did not call the police and have their little sister dragged away in cuffs.  I secretly wondered myself.  But, I told them, “She is only three.  It was an impulse.”  Sob.  “We’ve all wanted to do this at some point in our life.”  I continued to try to make them okay with the fact that mommy was having a complete meltdown.  “When you are three, you do things like this.” Sob.  “Can I get another bucket of soapy water, please?”  Sob.

Their father finally arrived home.  Yeah for Daddy.  He did not even begin to ask what happened.  I don’t think he wanted to know.   He knew we had a school event to get to and he settled the kids into their homework and took the toddlers upstairs to play, far from their defeated mommy.

He whisked them away to the school event.  “Mommy will be fine,“ I say as I wave to them.   “I will be there,” I reassure them.  “I will just be a little late.”  Cue fake smile of reassurance.

When the house was empty and it was just me.  I suddenly felt okay.  I never get to be at home alone.  It was also, then, that I discovered that my daughter had turned over the cushions to get both sides.

And, it was then that I decided that we were getting a dog.

You see, I had held off for years because I had seen how dogs tear up furniture and anything else that is left unattended.  They slobber and stink, sometimes.  My children had been begging me.  They were constantly inserting their desire for a dog into our family prayer time.  I had told them not to pray for a dog because mommy did not want one.  It’s not that I don’t love them, but there is no way mommy could take care of five kids and a dog.  I told them to pray that mommy would have a change of heart.  Well, in my pathetic state of self pity, I found a calling to surrender.  Let go and let God.  And God spelled backwards is dog.  Right?  What better way to surrender to divine Providence than to add another variable that I could not control. Some people need to be hit over the head with a two by four.  I needed Gigi to unload a gallon of Hershey’s syrup on my den. 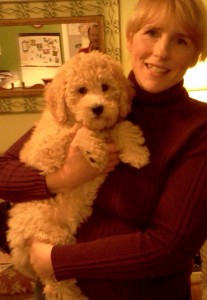 I am happy to report that in the months since the not-to-be-spoken-of event, my daughter has turned a corner.  She has begun to slow down that precious time between impulse and action.  That’s not to say that I haven’t found one or two entire containers of dental floss completely unwound.  Rather, since the event, I have lowered my expectations so much so that I am charmed by her antics.  They come from a place of complete trust and surrender that she can explore this world in a safe and loving home.

In my life, those times when I had the least control and admitted it and just rolled with it, have been the best times of my life.  It is how I find myself the mother of five wonderful children, and, now, the proud owner of the Duchess.

Whoever finds his life will lose it, and whoever loses his life for my sake will find it.