This is the next in a 12-part, once-a-month series on the Fruits of the Holy Spirit. This month’s fruit is FORBEARANCE or “long-suffering.” Be sure to see previous posts on CHARITY, GOODNESS, and KINDNESS, among others. Check back next month when we explore the fruit of HUMILITY. 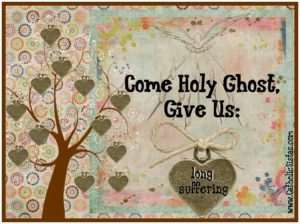 Our first wonderful priest once told me that the most spiritually dangerous kind of suffering is that which is chronic and non-terminal. In other words, the suffering that hangs around forever just to beat you up, refusing to even put you out of your misery. Like mental illness. Or a troubled marriage. Caring for disabled loved ones. Infertility.

Sometimes, the suffering doesn’t even have a name, but is more like the death of a thousand cuts…like those couple of years when your family was struggling financially, you lost a child, your husband got laid off, your relationships with family became strained, and you developed health problems. All of us have times in our lives, whether the source of suffering is a monster like cancer or simply a long period of unrelenting problems, when we feel like throwing up our arms to heaven and screaming, “Really, God? Again? CAN’T I JUST GET A BREAK FOR A WHILE?”

Long-term suffering that doesn’t kill you is most spiritually dangerous because it tempts us to doubt the goodness of God and his love for us. It also tempts us to become bitter; worn out by suffering (and often, as mad as hell about it, too) we can become angry, cold people who shut off their hearts just to avoid more pain. The only antidote to this kind of suffering is the Holy Spirit’s gift of forbearance, or long-suffering. Defined as the ability to patiently endure lasting offenses or hardships, forbearance is one of the hardest virtues to practice because it requires you to respond with patience and love, over and over, to the same situation over a long period of time. When we’re tired, beaten down, and just plain tired of hurting and struggling, we have to somehow find the strength to face the pain with graciousness and faith once again.

The good news is, we have plenty of people to help us along the way. People who were just like you and me, who (at least initially) struggled with despair and anger and frustration about their long-term suffering. In her excellent book, The Kiss from the Cross: Saints for Every Kind of Suffering, author Ronda DeSola Chervin offers us saintly role models for virtually every kind of suffering: doubt, frustration, fear, physical pain and fatigue, temptation, interior trials, loneliness, failure, exploitation, persecution, and marital discord. What struck me about each saint she mentions is that long before the person experienced spiritual peace about their suffering, she endured a long period of intense emotional anguish. Many of these people, whom we now remember only for the good they did during their lifetime, struggled with all the same emotions we do when we suffer: they were angry with God, they felt abandoned, they sometimes even lost their way for a while. Their initial reactions were in no way “holy,” even if they eventually learned to live with their struggles, grow from them, and even thank God for them.

As someone who is on the path myself, I treasure knowing that my older brothers and sisters struggled with much of the same doubts, frustrations, and anxieties that I do when faced with long periods of suffering. When my back is screaming in pain (again) during a fibromyalgia flare, it helps me to know that St. Lydwine, a Dutch saint who suffered for nearly 40 years with the most excruciating physical suffering imaginable, spent her first four years of sickness consumed with anger, bitterness, and despair. She was constantly reminded that she was a burden on the family by her mother, and the saint became convinced her sufferings were the result of being rejected by God. She would hear other young people playing outside her window and weep with frustration and sorrow because she was too sick to even get out of bed. More than once Lydwine has gone to the Holy Spirit for me, obtaining for me the graces I’ve needed to be patient and to trust in God while chronically ill, instead of lashing out at my loved ones and getting angry with God for allowing me to suffer for so long.

The beautiful thing about our saints is that there is one for every imaginable situation, especially situations that require forbearance. It’s easy to forget that St. Damien of Molokai had a bad temper and experienced decades of frustration while dealing with Church and government officials (annoying bosses, anyone?). Or that St. Cornelia Connelly’s husband, who had Cornelia charged with abandonment after he left her, tried to have her declared insane so he could get her family’s money. Or that St. John of the Cross was imprisoned by members of his own order. Or that Blessed Francis Libermann was wracked with anxiety from childhood, to the point he suffered migraines, stomach ulcers, and panic attacks. Too often we forget that saints are not born, they are made. And they are made through suffering.

Other than praying to the saints, there are some practical things we can do to help us embrace the Holy Spirit’s gift of forbearance:

I like to refer to life’s long periods of suffering as “love on trial.” It’s one thing to endure a sudden crisis that’s over quickly; it’s another to endure days, weeks, or years of abuse, fear, anxiety, illness, or disappointment, and still become a holy, loving person. God permits our suffering, even the long bouts, but he also knows we need his help not only to endure it, but to use it to our spiritual advantage. Let’s not forget that we have our beloved saints and the Holy Spirit to help us: “With all lowliness and meekness, with long-suffering, forbearing one another in love.” (Eph. 4:2).