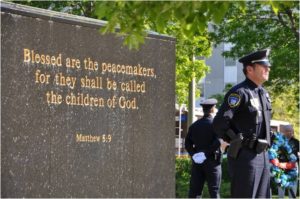 A few weeks ago, I walked into the grocery store and was immediately assaulted by the Time magazine cover declaring that “BLACK LIVES MATTER.” Beneath the giant white letters on a black background was a blurry picture of a police officer chasing a black man. I walked up to the magazine pile and briefly considered dumping all of the issues in the trash. Instead, I just turned them over so that the cover wasn’t visible, then spent the rest of my grocery trip so angry I forgot half of my list.

For the past 20 years, I’ve been married to a police officer. And in all that time, I’ve never witnessed the kind of vitriol directed at cops as I have in the past two years. In the past, those willing to pass blanket criticism of law enforcement fell into two general groups: 1) those who consistently run afoul of the law and 2) people who had recently received a speeding ticket. Most folks, though, were willing to concede that the men and women in blue were decent people just doing a tough job. A few even appreciated their sacrifices; a rarer few considered police work an honorable vocation.

Recently, however, there’s been a shift in the general attitude toward police. I’ve witnessed countless online conversations in which the assumption is that cops are really just corrupt, power-hungry thugs that need to be reigned in. I’ve been in groups where people’s demeanor visibly changes when they learn I’m married to a cop; the same person who was just pleasantly talking to me becomes immediately reticent or even mocking in her tone. Last week, when my husband and 12-year-old son attended Police Week in Washington, D.C., an annual event honoring slain officers, a woman came up to them on the street and shouted “F— you!” to each individual cop in their group, as well as to our son for being with them. Another man on a bike screamed “F— the police!” so disruptively during the memorial service that he was arrested for disturbing the peace.

What’s stunned me is that the people I now see saying and doing these things are not criminals or anarchists, but your average, middle-class citizens. They’re professionals, mothers, Christians. I actually left Facebook entirely after seeing a conversation in which several Catholic women I’d thought were my friends were talking about the “institutionalized police brutality” and saying that most cops are just interested in “oppressing people.” A parishioner recently told me she understands why people heckle police who set up a perimeter when an officer has been killed, “Because if the cops had just left them alone in the first place, none of that would have happened.” (You know, because police can decide which calls they’re going to respond to.)

The increasing hostility toward police has become especially intolerable to me since last May, when my husband’s partner and boss were murdered in an Alaskan village; a young man shot them to death for simply trying to arrest his father. Sgt. Scott Johnson left behind a wife and three teen daughters; Gabe Rich left behind a fiancee and two young sons. Last year, 117 people in law enforcement died; 45 police have already died so far this year. Yet I notice there has been no Time cover declaring that “BLUE LIVES MATTER.”

Few people know that before my husband asked me to marry him, he showed me a video of a police officer getting killed. He wanted me to know that this could be my reality, that he could go to work one day and never come home. I chose to live with those risks and God has generosity given us two decades together. But there has been an incredibly steep cost to all of us for my spouse to serve and protect.

Our children have nightmares and anxiety that they’re going to lose their father, which has only been heightened by the murder of his coworkers last year. Under the chronic pressures and trauma of police work, the outgoing, gregarious man with a palpable joie de vivre I married has faded into a quiet, socially-withdrawn man who suffers from insomnia and nightmares when he does sleep.

And why shouldn’t he have nightmares? He once held a dying seven-year-old boy in his arms and then had to listen to his family wail for hours while he guarded the body…he’s seen men, women, and children literally torn apart, their pieces strewn across the road or floor from accidents and suicides…he’s seen children and women beaten and unimaginably sexually abused. Last year, he had to walk through his friends’ blood and brain matter as he secured the house they were murdered in, as their bodies lay on the floor in a heap in front of him…and then he had to go back to that same small village and walk by that same house several times a month. It shouldn’t surprise anyone that only military personnel have a higher suicide rate than police officers.

Having seen the cost to my husband and countless other police officers, it’s truly incredible to me that an increasing number of people in our society look at cops with no awareness of or appreciation for the profound personal sacrifices they make. They look at these men and woman who give so much of themselves, who suffer so much privately to carry the terrible psychological burdens that they do–and they assume the worst about them. It never occurs to the growing number of cop-bashers that CNN or MSNBC or The New York Times might want to distract the public from more serious, impactful issues being mangled by our elected leaders. Or that the media has a vested financial interest in stirring up controversy. Or that there’s a reason grand juries–the ones with ACTUAL facts about cop shootings–almost always acquit police officers of wrongdoing, even in the most publicized cases like Ferguson.

It never occurs to people that maybe, having never actually had the training that cops do or faced the same risks that they do…it doesn’t occur to people that the police deserve the benefit of the doubt until the facts prove otherwise.

If you happen to be someone with a less-than-favorable opinion about police, I invite you to get into the trenches with them by scheduling a ride-along with your local department. Spend a shift or two with a cop, with an ordinary man or woman who has dreams, bills, fears, maybe even kids like you do. Watch him deal with infantile adults who can’t manage their lives, with the horrors of domestic violence and child sexual abuse, with delivering death notices to people that their loved ones have died. Watch her and consider that you likely couldn’t do her job (I know I couldn’t).

Then thank the officer, go home, and cancel your subscription to Time.