This is the first of a 12-part, once-a-month series on the Fruits of the Holy Spirit. This month’s fruit is CHARITY. Check back next month as another contributor explores the fruit of JOY.

One of the most amazing attributes of God is His generosity: He gives spiritual blessings to us freely, gratuitously, simply because he loves us. When Jesus sent the Holy Spirit to us at Pentecost, we could never have anticipated the Advocate’s overwhelming outpouring of spiritual gifts, which according to the Church are wisdom, understanding, good judgment, courage, knowledge, reverence, and wonder of the Lord.

These seven gifts are infused into our soul by sanctifying grace and if we cooperate with that grace, they will bear beautiful spiritual fruit that will help us move closer to the perfection God desires for us. In this article, we’ll focus on just one of those fruits: charity. Or in layman’s terms, love. 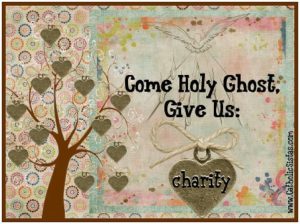 I’ve struggled with being charitable, or truly loving, all my life. I grew up with highly critical parents, who assumed the worst about each other, their children, and their neighbors and consequently, taught me to do the same. And because others were assumed to be inherently selfish, they didn’t deserve to have love extended to them. Certainly not self-sacrificial love, which is the highest kind, as taught to us by Christ.

In time, by meditating on Christ’s own sacrifice, I realized that whether or not a person deserves charity is entirely irrelevant to our call to live it out. It goes back to the truth about ourselves, really: Christ laid down his life while we were still sinners and there’s no question of whether we deserve the redemption and salvation he offers–we don’t. I shudder to imagine the hell, both of this life and of the next, should Christ have decided to give us only what we deserve.

It’s because of the Lord’s love, offered to us as a free and completely undeserved gift, that we’re called to offer that same love to others. Jesus emphasized this again and again in the Gospels…particularly in the parable about the servant, who was forgiven a great debt but who then refused to forgive a much smaller debt another owed him. We’re told that the measure we measure out to others will be measured out to us. So if we measure out judgment, we’ll get judgment…if we offer love, we’ll get love.

But what is charity? It’s many things, but at its core, it’s treating others as we would want to be treated. That means assuming the best of them, as I would want others to assume the best of me. When we act or say something hurtful to another, it’s usually unintentional and we appreciate it when the person doesn’t take it personally and still assumes we’re a kind and good person who just thoughtlessly and temporarily screwed up. Yet how many times do we feel wounded and instantly assume the person was malicious and the blow intentional? We assume the worst about their motives toward us, when in fact people are rarely intentionally cruel. Thoughtless, careless…yes. But cruel? More likely, they were just being human.

What about those times when a person does say or do something to deliberately wound you? We’ve all been on the receiving end of those kinds of actions, but if we’re honest, we’ll admit we’ve also been the perpetrator at times, too.  Haven’t we all said something we knew was going to hurt someone, because we wanted to hurt them? I’ve done it too many times to count, I’m ashamed to say.

Admittedly, it’s much harder to be charitable to others when they intentionally hurt you. Yet we do this to God all the time. We offend him intentionally with sin a hundred times a day and he still chooses to forgive our offense. The advantage we have with God is that when we offend him, he knows why. He knows that usually, our offenses have little to do with him and everything to do with our own brokenness. He knows that the man who fails to speak out against evil was criticized constantly as a child, making him fearful. He knows that the woman who commits adultery is starved for affection from her workaholic husband. He knows that when we sin, we usually do so from a place of pain. Because he knows all this about us, he doesn’t turn his back on us in indignation, but loves us even as we commit the most heinous offenses against him. And works tirelessly not to punish us, but to effect reconciliation so that we can remain in friendship with him.

Yet human beings take every offense personally even when it’s personal. But it never really is. When someone lashes out at me, when the person does or says something hurtful, my first and selfish instinct is to focus on my own wounded dignity. But if I want to be like Jesus, then I need to see them as Jesus does, and that means recognizing that their actions are about their own souls, not about mine.

I remember distinctly the first time I was even able to practice this change in perspective. It was a few years ago, when I was home alone with four children while my husband was in another state working. I was trying to hold down the fort while preparing our family to move to Alaska. I’d made tentative plans with a friend to get together over the weekend, but ended up having a nervous breakdown that weekend instead and didn’t follow up with her until the following Monday. I explained to her that I’d just been overwhelmed and apologized I hadn’t called or firmed up our plans.

Her response shocked me. She haughtily said it was a good thing I’d apologized, because she had decided to scrap the friendship entirely and never talk to me again. But she was willing to give me another chance, assuming I was genuinely sorry I hadn’t called.

Her response seemed so over the top that it gave me pause. Normally, I’d have been so irritated by what I perceived to be her disregard for MY feelings and difficult situation that I would have responded with, “Good riddance, then!” But then I realized this woman’s reaction revealed not that she was self-absorbed, but that she was terribly damaged. I knew she had few friends and struggled to trust people due to past betrayals. So why was she so willing to toss a supportive friendship aside so quickly? Of course…she’d been so hurt in the past that she was willing to end a friendship over a minor slight rather than risk a more devastating betrayal in the future. Her actions weren’t vindictive, they were protective. It was about protecting her own heart, not about wounding mine.

Being charitable toward other people, in both thought and in deed, is the hardest battle I’ve faced as a Catholic. For years, I dragged this sin into confession, almost despairing of ever being able to assume the best of people and act in their interest over my own. It’s only been recently that I’ve made real progress in my quest to offer real love to others and the first step was making a conscious choice to replace those negative thoughts about them with positive ones. If my husband goes to work without doing a chore I asked him to do, I remind myself of all that he does do for our family and tell myself that he must just be overwhelmed. If someone says something unkind, I tell myself they must be having a bad day (which we all have). If my priest doesn’t preach as forcefully as I’d like, I remind myself that as a priest, he faces spiritual attacks I can’t imagine so I need to pray for him instead. Being uncharitable, particularly in my thoughts, was a bad habit that I allowed to run unchecked for more than 30 years. It’s going to take time, probably a LOT of time, to correct the habit of assuming the worst about people to offering them the same tolerance and unconditional love that Christ offers to me despite my own sins.

The second thing I did was to accept that being truly charitable means acting lovingly regardless of whether I get anything back from the recipient. And that includes good feelings. If I spend two hours making dinner for an overburdened mother who fails thank me for it or even mention it, then I need to be happy with the fact that I performed a loving act. It’s helped enormously to choose to do a loving act for Jesus first, for the person second. Jesus always sees and appreciates it when I choose to love and I earn merit in heaven regardless of whether I get any earthly reward for it.

Charity puts the other person’s needs first, even at great cost to yourself. This change in perspective has enabled me to eradicate much of the self-interest I’m prone to wrap up into the kindnesses I choose to do for others. It feels good to do good, but I need to do good even if I don’t get those warm fuzzies back. This also has enabled me to avoid the painful disappointment and emotional withdrawal I would easily fall prey to in the past when others didn’t reciprocate or seem to appreciate my loving kindness toward them. Making my actions a gift first to Jesus means the gift is always accepted and appreciated in love…regardless of how the human recipient reacts to it.

Being charitable, or loving, to others is a work in progress for me and for most of us. It takes a continuous infusion of divine grace for us to cultivate this fruit of the Holy Spirit, because we have to work against our own selfishness and egotism to live it out. I look forward to the day when being charitable toward my fellow man is no longer a struggle, but effortless because I’ve embraced true humility and holiness. Until then:

Come, Holy Spirit, fill the hearts of your faithful and enkindle in them the fire of your love.