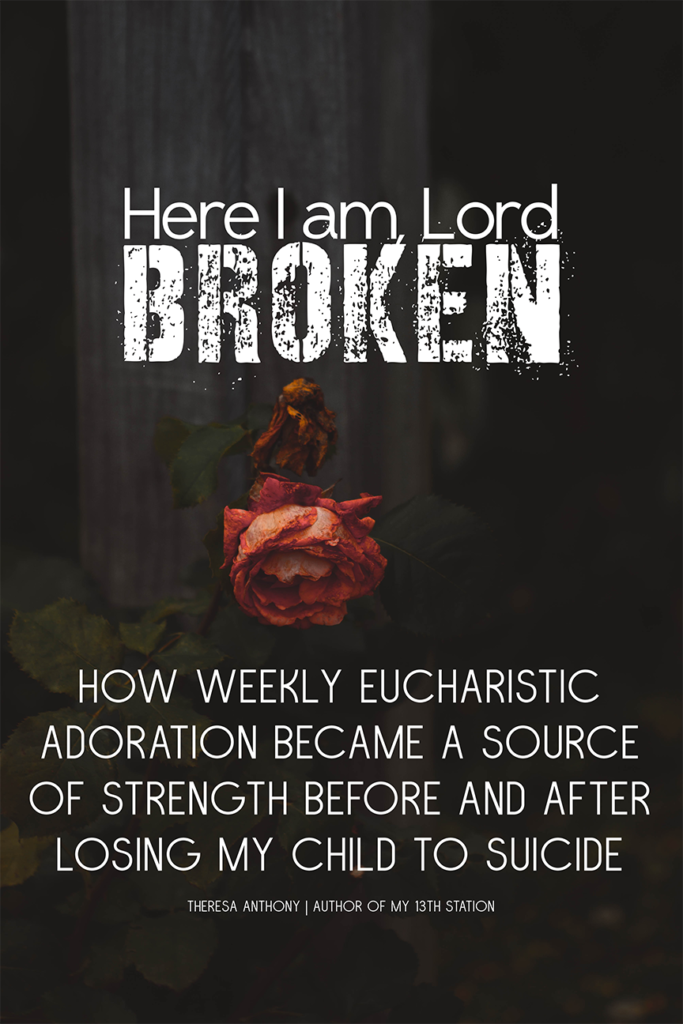 “That next day I sat in Adoration for an hour. Instead of reading or writing, I just sat there staring at the Blessed Sacrament, fixated on it as a life source. I was all out of ideas. I wasout of energy. I was losing hope. Something far stronger than me had its grip on my son.” ~ My 13th Station, memoir

When I was young I naively believed that all I needed in preparation for the big bad world was a college degree, a solid resume, and a little luck. As a poorly catechized Catholic, I was never taught the immense richness and beauty of the faith, nor did I learn about the essential need for forming an intimate bond with Jesus. These concepts were simply foreign to me growing up. I eventually left the Church at age 18 to spend the next twenty-two years flailing about—getting that college education and building my resume while living the cycle of sin.

At age 40 I came limping back to the Church, tail between my legs. Life had humbled me. A powerful hunger for knowledge about the Church of my heritage launched a years-long process of self-teaching. I devoured books as if they might evaporate before I could finish them, such was the sense of urgency. I gobbled up books on the Saints, writings of the Church Fathers, the Doctors of the Church, Scripture, and became pretty well-versed at apologetics. I was on fire.

It was during these early years after returning to the Church, about twenty years ago, that I discovered Eucharistic Adoration. I will never forget entering that dim little chapel and immediately, instinctively, falling to my knees in front of Jesus, present there in the
Blessed Sacrament. Thus began a deep love for spending quiet, special time with Our Lord in Adoration.

Who knew that these weekly visits would become my number one most important survival tool? It was as if Jesus timed my discovery of Adoration just in time for the exceedingly difficult years that would follow, unknown to me of course. I looked forward to my Wednesday evening “dates” with Jesus with such devotion and love in my heart. I began journaling while I sat there immersed in the warmth of His graces. Over the years I filled multiple journals with the details of my faith journey. I jotted down gushing passages about my children, as well as sorrowful entries about my crumbling marriage, while in His loving embrace.

For a few years there I gave up my weekly commitment and just popped in to the chapel at will. Funny, because looking back it is clear that those were the years that I should have committed to several hours per week. The wheels had come off. Spiritual warfare raged in my home, my marriage ended, and my dear son was overcome suddenly with depression at age 19.

Throughout the six years that my boy battled depression and, subsequently, alcoholism, I relied on just about every tool the Church provided. I found sources of strength in a daily rosary, Adoration, intercessory prayers, novenas. Still, my son’s illness worsened and his life began to unravel. I would go to that little Adoration chapel seeking solace from the Source of all graces, relishing those times when I was alone in the room with him so I would just wail and cry with abandon. Jesus was there for me.

Tragically, my beloved son didn’t make it. He lost all hope and took his own life at age 25 on October 23, 2013. I can say with all sincerity that without my deep faith and ironclad bond with Christ and His Mother I would not have survived the grief. Over these last six years since losing my son I have leaned on Jesus even more for the strength to go on. Now each week in Adoration I plead for His Loving Mercy on my son’s soul, to eventually allow him into Heaven.

I am a different person now when I visit Him. I still write in my journal and pray my rosary in the little Adoration chapel, but I am a depleted version of my former self. Even so, I know on some level that getting that dose of time each week with Jesus is helping to sustain me, even propel me. He still has plans for my life, and this time I realize how much I will need Him.

Theresa Anthony is a freelance writer who specializes in writing within the addiction and mental health space. Her recently published memoir, My 13th Station, offers a transparent journey into her son’s battle with alcoholism and depression, culminating in his suicide, as well as intense spiritual warfare. My 13th Station is available at Amazon and Barnes and Noble in both ebook and print formats.

I realized very quickly that I could not love myself by my own strength. I needed to look beyond myself and my neighbors. My journey towards self-acceptance began in a dark place during my adolescent years.

I was bullied for being short, quiet and more plain-looking than the other kids. We didn’t have a lot of money growing up so I didn’t have the newest, most up-to-date clothes and technology that it seemed everyone else had. You know what they say– “the kids in middle school can be so cruel!” But what was more cruel were the things that I heard in the silence of my own thoughts. I was that 13-year-old girl who buried herself between the pages of Chicken Soup for the Soul. It was a heartbreaking way of coping with the teen angst–you knew that most kids had to endure and attempt to master the awful art of fitting in, yet you felt like nobody could possibly have it worse than you.

The older I got, the more and more I disliked who I was, outside and inside. I was achingly awkward and always treated as a doormat among my “friend” group. I was the last and the least among my peers. I stayed up at night wishing that I could wake up one day and be a completely different person. I didn’t understand why God had made me this way, especially feeling like the fact that I didn’t look like my peers was a punishment of sorts. I hoped and prayed that one day I would get my turn as the heroic female lead. That I would be feminine enough. That I would be strong-willed and fearless. That someday someone else would love me.

At 17 years old I entered into a relationship with someone who showed me that love was…conditional. That loving someone meant you had to compromise your dignity. The idea that “if you give me what I want, or if you measure up, then I’ll love you.” Sadly, I am one of many girls who share this experience of attaining love, whether it be from a boyfriend, friend, or family member.

Because I was young and this relationship was not Christ-centred, I had no idea how to love someone else. I had lost my self-respect, settling for giving my all to someone else in order to prove myself useful and worthy. Sometimes I wonder why God didn’t wake me up from this bad dream. Why didn’t he reveal himself to me as, putting it lightly,  the man I had been searching for all my life.

All this time I was looking to be noticed by God, He was really waiting for me to notice Him first. My insecurities broke me from the inside, enough for God to find His way in. He didn’t embrace me like a heavy storm, but like a soft, gentle rainfall. Often, only through tears did I see Him.

I truly believe that these painful growing experiences really do show you what you are made of. Our brokenness is an offering that brings us closer to God, and ultimately who we are meant to be (Psalm 51:17). It’s like starting life from taking your first steps, finding out which things are stable enough to hold onto, versus the things that falter when you lean on them. I think we often end up choosing the weaker, more unsteady foundations. Like that child, what we need is someone to take our hand and carry us. We are lost sheep, in need of guidance. (Isaiah 40:10-11).

Today, I still have times when I don’t love who I am. Loving myself was never about seeing myself as a new person healed from all the hurts of the past. Loving God showed me that my brokenness had a purpose. It’s about seeing yourself as God sees you, even with the cuts and bruises of our sin. What does loving yourself look like? It looks like mercy. Our journey towards holiness is learning how to love as the Father loves. This doesn’t mean we will be able to love perfectly, but we know that we aren’t able to love ourselves fully without knowing and loving God first.