Studying Abroad Part I: One Short Week in the Eternal City

Two Pairs of Toms and a Rosary Walk into the Pantheon:
A Young Woman’s Study Abroad Experience

I have been given the greatest opportunity to study abroad with the University of Dallas at the Rome, Italy campus. Months of preparation, forms and permissions led up to the boarding of our flight from Atlanta to the Fiumicino airport in Rome. My first days in Rome were rough. Jet lag is very real and culture shock is actually terrifying. Handbooks and planning, meetings and orientations, cannot prepare you for landing in a country where you can’t read or speak the language. Living in close quarters with 106 peers, some of whom you know, some you don’t, some you dislike, and some you love is not always fun. Studying abroad isn’t all beautiful pamphlets and sunshine. In fact, it’s quite cloudy and cold. Very cold. And for some reason, “footwear of any kind” cannot be shipped to Italy. Neither can “haberdashery.” But I digress… 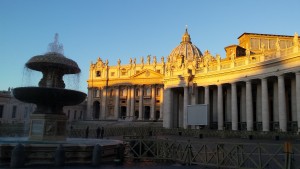 Despite my struggles, I also have had some of the greatest days of my life here. Our first day in Rome started with a private mass at the Altar of St. Joseph (Altar di San Giuseppe) in St. Peter’s Basilica. Walking into the breathtaking basilica made the 5am wake-­up call completely worth it. I walked passed some of the greatest art and architecture ever created and walked by the bones of saints that lived hundreds of years before I was born. 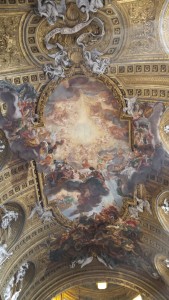 Ceiling in St. Andrew the Apostle

Our walking tour that first took us through beautiful church after beautiful church. We stumbled upon (and I do mean that literally, as Roman cobblestone streets are very uneven) the skull of St. Agnes in her namesake church at the Piazza Navona. We visited the beautiful Pantheon, previously a temple to many gods and now a Catholic basilica dedicated to Mary and all the martyrs. And wandered around St. Andrew the Apostle, which had some of the most beautiful ceiling art I have ever seen (granted, I have not visited the Sistine Chapel… yet).

While I know that everything I am seeing is new for me, at the same time it is all familiar. The monstrous dome that is the Pantheon feels like my best friend’s house. The statues of countless popes are like decorations in my own home. The small streets filled with Smart Cars and scooters feels like my neighborhood. Everything is foreign and familiar, strange and known. My heart feels the presence of Christ in these places where He lives, and where I now live for the next few months. 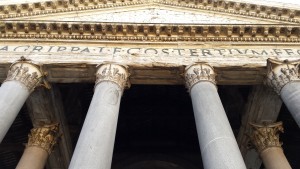 There is no doubt that there are marvelous things in Rome besides the churches and basilicas. Area Sacra di Largo Argentina, where Julius Caesar was killed, is now a stray cat sanctuary (I know it sounds like I’m joking. I’m very serious). The Colosseum, the Roman Forum, and temples to Hercules and Portunus are grand and glorious. Trevi Fountain during the day has a majesty that makes tourist and local alike stop and stare.

But despite these marvelous other things, there is nothing quite as amazing as the smoky aroma of incense wafting over your tired body while walking into a church you’ve never seen, but feel like you’ve entered a thousand times.

I’ve been here for a very short and long few days, and I cannot wait for more adventures here in the heart of the Catholic Church! 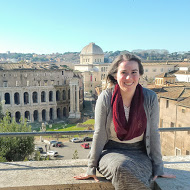 Biography: My name is Avery Utz, and I am on my semester abroad for the University of Dallas at our Due Santi campus, thirteen and a half miles outside of Rome. I currently have 6 scarves, 4 pairs of shoes, 1 jar of peanut butter, and no idea what I’m doing, but thankfully God does. And I think He agrees that I look great in a scarf, and that peanut butter is delicious. I love the Mass, my family and friends, and drinking way too much Italian coffee.

« February: The Month of the Holy FamilyWhy Is the Catholic Sex-Life Everyone’s Business? »