Remember the scene in the movie The Passion of the Christ when the androgynous, almost-beautiful-but-not-quite Satan character is carrying a baby, and when the face of the baby is revealed, it turns out to be old, ugly, and creepy rather than a sweet baby face? This was confusing for a lot of viewers, and when asked about it, director Mel Gibson explained that the surprisingly hideous baby was a depiction of how evil is a distortion of what is good. In other words, it can appear at first attractive, but when we take a closer look, we [hopefully] see that it is a twisted counterfeit of the good that it purported to be.  This is what I think of when I think of the book (and now movie), Fifty Shades of Grey. Admittedly I haven’t read it and certainly don’t plan to see the film, but I know enough about it to know that it’s an example of how Satan takes what is good, what speaks to the deepest longings of the human heart, and perverts it into its own opposite. 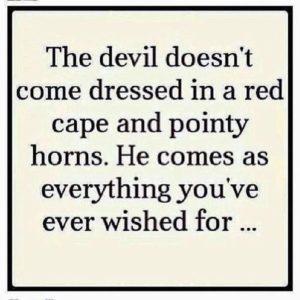 Fifty Shades is about an innocent, and apparently boring, college student (Ana) who falls for a strong, successful man (Christian) with a proclivity for abusive domination in the bedroom. (I guess because it’s “consensual,” people might balk at the word “abusive,” but sometimes consent does not change the nature of a thing). The popularity of the story comes not from the plot or the good writing—in fact, I’ve heard the writing is laughably bad—but from the explicit sex scenes detailing this domination. The book, along with its two sequels, has been called “mommy porn,” and men and women are admitting all over the internet that it has “spiced up” their intimate relationships. The only conclusion I can reach is that women are enjoying the depiction of this type of relationship. Perhaps surprising even themselves, modern women are turned on by a man who likes to control and dominate women. This is somehow “romantic,” and like a “fairy tale” (if the movie preview is to be believed).

So what is the good that is drawing women into this story, but is being twisted into something dark and evil? Aside from romance and sexual intimacy, the good that is being counterfeited in Fifty Shades of Grey is authentic masculinity.

Here is where I reveal myself to be hopelessly old-fashioned and decidedly not-a-feminist (in the common sense of the word). I believe, and the Catholic faith teaches, that God created men to be leaders. He created them to be strong and active, with a drive to take charge. And I believe that He created women be attracted to strength and leadership qualities in their mates. These fundamentally good qualities have been twisted by the Evil One throughout all of history. Because of original sin, men in every age have struggled to live out their roles properly. Some have used their strength and their role as leaders to hurt and subjugate women, even using Scripture to justify this behavior. These men have misunderstood or ignored the fact that true leadership is also service. The role of a leader, of a man, is to seek and provide what is good for those in his care. True leadership, true masculinity, is never self-serving. A real man doesn’t use his strength to dominate, but instead to carry his cross, and even to shed his blood in sacrifice for those he loves. This is a hard truth, and thus counterfeit masculinity is nothing new.

In modern America, women have responded to the twisted version of masculinity—the version that says it’s manly to dominate and abuse—by trying to feminize men and take over all leadership roles. While our society still produces many men who try to be leaders but completely misunderstand the role, it also produces a lot of very wimpy men who sit on the sidelines letting women completely run the show. They are content to take a back seat in the decision-making in their families, to play the role of the inept screw-up while women do all the heavy lifting. They prefer pornography and promiscuity to doing the hard work of winning the heart of a woman and fully giving himself to her in, and out, of the bedroom. Strangely, modern women seem content with effeminate men. But, I think that even as they fight against masculinity and try to feminize all the men around them, it is a secret desire of their hearts to have strong men who want to take charge.

And that is part of where Fifty Shades of Grey gets its success. Without realizing it, I think women are starving for relationships where there are no power struggles, or where they are not the ones always in control. They are starving for men to be manly – strong and decisive. (And perhaps men are enjoying the way that this book has changed their sexual relationships because now they finally get a chance to be “in charge” in some aspect of their relationship). The problem, of course, is that Christian Grey is not displaying authentic masculinity or leadership, and the relationship in the story is not one that will really fulfill the desires of the female heart. The sexual relationship may seem exciting but it does not honor the human dignity of both participants and is a far cry from the mutual self-giving that is the hallmark of a respectful intimate relationship.

Ladies, let us not settle for this counterfeit masculinity. The “bad boy” who misunderstands and misuses his masculinity is understandably alluring when the alternative is a wimpy “nice guy” who sits on the sidelines and lets women dominate him and fight his battles. But what about the third option? What about the strong, adventurous man of action who doesn’t shirk his responsibility as the servant-leader? What about someone who is willing to risk his life slaying dragons for you and your children – not only to protect your bodies but also to protect your souls? What about someone who is like the Lord, who leads with quiet strength, not dominating people with his power, but also not afraid to turn over some tables when justice calls for it?

17 Replies to “Why settle for shades of grey?”