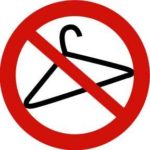 One of the most frequently cited arguments against criminalizing abortion is this:

If abortion is illegal, women will resort to dangerous, do-it-yourself abortions or untrained, back-alley abortionists. Desperate women will die by the tens of thousands, just as they did prior to Roe v. Wade. Legal abortion safeguards women’s health by giving them access to trained professionals who can end their pregnancy safely.

The idea that legal=safe is succinctly represented at pro-choice rallies by a “No Coathanger” image, like the one to the right. But facts, as John Adams once said, are stubborn things. On May 21, 2005, Dr. Gunta Lazdane, European Regional Advisor to the World Health Organization on Reproductive Health and Research, told attendees at a conference on population that “up to 20 percent of maternal deaths are due to abortion, even in those situations where abortion is legal…there is a question whether legal abortion is safe.”

Abortion rights advocates have promoted the “legal equals safe” myth from the beginning, claiming that illegal abortion claimed the lives of 10,000 women per year prior to Roe v. Wade. But as former abortionist and NARAL founder Bernard Nathanson admitted in his autobiography The Hand of God, he and other abortion advocates literally fabricated the statistics about illegal abortion’s death toll. Then they’d watch gleefully as sympathetic journalists quoted their made-up figures as gospel truth.

Today, more than 40 percent of all abortions are repeat abortions, proving (despite abortion advocates’ claims to the contrary) that widespread availability of abortion and contraception has in no way made people more sexually responsible. If anything, it has made them more careless and promiscuous. This attitude was captured perfectly in a 1977 article published by The Population Council, where the author quoted one source’s reasons for not using contraception:

What this tells us is that abortion advocates’ real priority has always been unrestricted legality. Safety, while a nice idea, is incidental and secondary. In 1989, the Miami Herald ran a story about a local abortion clinic whose conditions were heinous. The clinic was run by a woman with a lengthy police record, whose brother (a clinic assistant) actually ended up in prison as an ax murderer. One of the clinic abortionists had lost his medical license in another state after having sex with a 14-year-old.

After one woman died and another was maimed, the Herald ran a story on the clinic, which forced abortion advocates to respond. They admitted they had known about the clinic’s conditions but that had remained silent for political reasons. According to pro-choice advocate Janis Compton-Carr, “In my gut, I am completely aghast at what goes on at that place. But I staunchly oppose anything that would correct this situation in law.”(6)

Compton-Carr was simply expressing what abortion advocates have always meant by “safe and legal”: Safe if possible, but legal regardless. If you think this isn’t still happening, just look at the women butchered and maimed recently by abortionist Kermitt Gosnell in Philadelphia. After Gosnell was indicted last year, district attorney Seth Williams confirmed that state regulators had ignored complaints about Gosnell’s clinic for nearly 20 years.

And if you think these two clinics are anomalies, I dare you to Google “died from abortion” and watch the headlines stack up.

While it was extraordinary that a WHO officially even admitted that one in five women die from legal abortion, Dr. Lazdane’s report didn’t address the percentage of women who are “merely” maimed from legal abortions. Common sense tells us that if 20 percent of women are dying from abortion, there no doubt just as many if not more women suffering non-fatal injuries.

In Lime 5, author Mark Crutcher details how Life Dynamics Inc., a pro-life organization, went undercover as a pro-choice group in the early 1990s to obtain information about the abortion industry. The group discovered that shockingly high numbers of women were indeed suffering horrendous injuries during legal abortion procedures.(11) Crutcher cites hundreds of public records to show that women obtaining abortions in the United States routinely suffer minor to severe injuries to the uterus, cervix, intestines, and urinary tract. A significant number also are hospitalized because abortionists perform incomplete abortions, leaving fetal tissue in the uterus that later causes infection and hemorrhaging. In many cases, the injuries to the women cited in Lime 5 were so severe that they died within hours or days of the abortion. Those more fortunate only required hysterectomies or a colostomy bag.

People forget that back when abortion was illegal, physicians who performed abortions had serious incentive to perform them safely. If a woman was injured or died, the doctor faced criminal charges. Today, however, abortion is almost completely unregulated. As the Gosnell case showed, abortion clinics are often allowed to run without any oversight, yet attempts to hold these clinics to any kind of medical standard is always met with staunch resistance from the pro-choice crowd. I still remember being shocked to read that abortion facilities in my home state of Virginia were finally required by law to meet the same safety standards as other freestanding medical clinics–legislation that only passed in 2011.

The truth is, pregnant women were NOT dying in droves prior to Roe v. Wade, but they are now. The next time you wonder if it’s worth it to witness outside of an abortion clinic, remember: there’s no guarantee the women you see walking in those doors will ever come out again.

6 Replies to “The Stunning Death Toll of LEGAL Abortion”