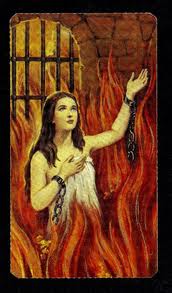 In part one of this series, we talked about what purgatory is and why it’s logical (and biblical) that we need to be purified after death and atone for the earthly effects of our sins. In this article, we’ll learn about the experience of purgatory, which has been revealed to a few saints throughout the centuries for our spiritual benefit.

Early in my research on purgatory, I thought I was in pretty good shape. I thought, “Well, I haven’t murdered anyone or robbed any banks, so bring on the atonement!” Then I read about the saints’ visions of purgatory. And quickly realized how ignorant I was of the true horror of sin.

Yes, purgatory is painful—excruciatingly painful, by the saints’ accounts. Because in purgatory, we’ll experience two kinds of suffering: the pain of loss and the pain of sense.

The pain of loss consists in being deprived for a time of God himself. Even now, being separated from our loved ones is painful; just ask anyone who has lost a spouse, child, or parent. If earthly separation is so painful, then, we can’t imagine the torment we’ll experience in purgatory when we become fully aware of how much we love God—and know that we’re still separated from him by our own imperfections and debts.

Sensory pain in purgatory, while not formally defined by our faith, is nonetheless affirmed by Church doctors to be of the most intense kind, often related to fire. Just as the impurities of metal are burned away to reveal the pure element, our imperfections also will be burned away and our sins be expiated until we are entirely pure of heart and capable of truly experiencing God in his unveiled holiness.

We see this concept described by St. Paul in Scripture:

Now if any man builds on the foundation with gold, silver, precious stones, wood, hay, straw, each man’s work will become evident; for the day will show it because it is to be revealed with fire, and the fire itself will test the quality of each man’s work. If any man’s work which he has built on it remains, he will receive a reward. If any man’s work is burned up, he will suffer loss; but he himself will be saved, yet so as through fire. (1 Corinthians 3)

Notice that St. Paul says that even souls whose “work” is weaker will still be saved, but he will be saved through “fire.” This is the fire of purgatory.

But what is purgatory really like? Saint Bede (d. 735) relates a story in his “Ecclesiastical History of the English People” about purgatory. He tells of a good Christian Englishman named Dritheim Cuningham, who died one night. The next morning, however, Cuningham sat up again and rather startled those gathered around his bed weeping. He quickly got up, went to church, and spent hours in prayer. He then divided all he owned into three parts, giving two thirds to his wife and children, and the rest to the poor as alms. He retired to a monastery and lived the rest of his (second) life as a penitent.

When asked to relate what he’d seen in death, Cuningham said an angel led him to a wide valley. The left side appeared full of flames, while the right was attacked by violent hail and snow. Both sides were full of souls who tossed themselves from one side to the other; when they could no longer endure the fire, they leaped into the cold, then back into the flames and so on.

Cuningham said he thought the place might be hell, but his guide explained that:

That vale you saw so dreadful for consuming flames and cutting cold, is the place in which the souls of those are tried and punished, who, delaying to confess and amend their crimes, at length have recourse to repentance at the point of death, and so depart this life; but nevertheless because they, even at their death, confessed and repented, they shall all be received into the kingdom of heaven at the day of judgment; but many are relieved before the day of judgment, by the prayers, alms, and fasting, of the living, and more especially by masses.

Cuningham spent the rest of his life exacting severe penances to expiate his sins and to offer as suffrage for the souls in purgatory. He would wade out into the river in winter and pray until his clothes were frozen. When someone asked how he could endure such cold, Brother Dritheim would only say, “I have seen greater cold.”

Another saint who returned from death was St. Christine the Admirable (d. 1224). During her funeral Mass, the nun astonished those in attendance by sitting up in her coffin, then flying up to the rafters of the church! A remarkable priest finished the Mass, then made her come down.

St. Christine reported that she had been to hell and then to purgatory, where she’d recognized many souls. She was then offered the choice of going to heaven or returning to earth to expiate sins on behalf of the souls in purgatory. She chose the unselfish course (of course).

After her return, St. Christine renounced all comforts of life. Not content with extreme poverty, she threw herself into burning furnaces but would emerge with no sign of harm. In winter, she plunged into the frozen river and remained there praying for weeks. Sometimes she was carried downstream to a mill, and would be beaten round its wheel without breaking her bones, as it did to everyone else. She ran into thickets with long, sharp thorns until she was covered with blood, but would emerge with no wounds. St. Christine suffered these penances for 42 years and the miracles associated with her converted countless sinners.

Finally, there’s the Venerable Stanislaus Chocosca of Poland. In 1598, while praying for the souls in purgatory, he saw a soul near him enveloped in flames. She asked him to help alleviate her suffering, at which point Stanislaus asked if the fire was more painful than that of earth. “Ah,” the suffering soul replied, “all the fires of earth compared to that of purgatory are like a refreshing breeze.”

Even more shocking is that souls have reported to saints that they experienced severe expiation even for venial sins, such as saying something unkind or ignoring an inspiration of grace. Often the sins were things most of us would rarely even recognize as sinful, such as being scrupulous or having too great an attachment to one’s family over God.

Hearing that even our slightest faults must be painfully expiated in purgatory may scare the hell out of you (ha!) and God certainly does wish such examples to incite a holy fear of sin in us. But we must temper our fear with the knowledge that though we may suffer terribly to purify our souls and atone for our sins, we will do so with complete peace, because in purgatory we are free of all attachment to sin. As such, our wills will be completely in accord with God’s will. We will actually desire the pains of purgatory, because our strongest desire will be to be perfect so we can be with God for eternity.

Not only will we suffer peacefully, but we will even do so with a deep joy. St. Catherine of Genoa (d. 1510) was a German mystic. In her Treatise on Purgatory, she says once a person dies, its sins are revealed to it only once. Then the soul never thinks of them again because she is consumed only with thoughts of God. During this momentary view of self, the soul perceives the consequences of her sin, or “malignant legacies,” as St. Catherine calls them. These imperfections are the chief impediment to being with God that must be burned away in purgatory.

According to St. Catherine, when God creates our souls, he makes us with a certain beatific instinct towards himself. Original and actual sin draw our souls away from God and the further we depart from the beatific vision, the more malignant our soul becomes. Conversely, as our soul is purified and approaches the perfect state in which we were created, the more we will be drawn to God and desires only to do his will.

St. Catherine said that we will desire God so strongly in purgatory that even if we could choose between going to heaven with minor perfections or suffering the most fearful pain in purgatory, we would always choose purgatory. We would rather plunge ourselves into a thousand hells than stand before Divine Majesty with even the slightest fault, she says.

This truth is beautifully illustrated in a revelation to St. Gertrude the Great (d. 1302).  The saint saw the spirit of a religious who had died in great holiness. The soul stood before Jesus, but she kept her eyes down as if ashamed, and showed by some gesture a desire to be away from Christ.

Gertrude was astonished and asked Jesus why he didn’t receive the soul with love. Our Lord then beckoned the soul, but she moved further away with profound humility. Amazed, Gertrude asked the religious why she avoided Jesus. The soul said she stayed away because she was not yet perfectly cleansed of the stains of her sins. “Even if He were to grant me in this state a free entrance into Heaven, I would not accept it; for all resplendent as I look to your eyes, I know that I am not yet a fit spouse for my Lord.”

Once in purgatory, we will see it for what it is: a final, merciful opportunity to become perfect so we can be in full union with our perfect God. And because we will truly desire God above all, we will be supremely grateful for our suffering and experience a profound joy even in the midst of our pain.

Next time: How we can avoid purgatory and help the suffering souls in purgatory, too.