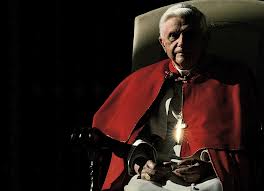 At St. Mary’s Seminary, ecclesial rumors spread like wildfire.  By 6:15 this morning, news of Pope Benedict XVI’s resignation was making its way through our ranks.  After morning prayer and meditation, there was an explosion of speculation and opinion at the seminary.  Indeed, my first class this morning was dedicated to a discussion about the event.  This is no doubt to be expected as everyone comes to grips with the situation but I would like to make a few observations about what is happening and offer a hopeful perspective regarding Pope Benedict’s resignation.

I have observed among my brother seminarians that each is absorbing the revelation in their own way.  Some in silence, some in conversation, and others in the chapel.  Shock and sorrow seem to be the theme of many hearts, including my own.  Catholics (and non-catholics) have fallen in love with Pope Benedict XVI over the last eight years.  His teaching is profound, his heart warm, and his leadership solid and foresighted.  He has done much for our Church as the Vicar for Christ over these last years.

When I began checking the news before my first class I didn’t have to go far.  Rumor and speculation are at their peak as to why the Pope is retiring, what will he do after he retires, and will he will go back to being a Cardinal?  There is an unending discussion about who the next Pope will be and what the future of the Church will look like.  Will there be this change or that change in the Church?  And the list goes on.

As you’ve undoubtably noticed, everyone is talking about it.  Twitter and Facebook are wild with comments, links, and thoughts about the Pope’s decision.  News stations are calling anyone connected with the Church for comment.  Heck, I’m even writing a blog article.  Why is everyone talking about it?  Simple, it will effect the whole world and the course of history.  Kind of scary when you think about it that way.  At least for me it is.

When Christ died on the cross, his disciples were devastated.  They had lived with Christ, fallen in love with him, and believed him to be the messiah sent by God.  When he died they were shaken deeply.  They did not know what would happen, where they would go, or what they would do.  Everything that had happened and that they had believed was put into question by Christ’s death.  Simply put, they were desolate.  With eagle clear hindsight you would think they would have remembered Christ’s words predicting his death and his promise of resurrection but they did not.  We, however, have something the disciples did not:  the resurrection of Jesus and the indwelling of the Holy Spirit.

The joy of resurrection and the indwelling of the Holy Spirit assures as Christians today that Christ’s promises are true.  When any sort of storm comes upon us in the bark of the the Church, of which there have been many and will be many, we must hold fast to the promises of Christ and your faith in him.  Because he is always faithful, his promises are true.

What is happening now is not unlike what happened then.  We can lose track of the unshakable promises of Christ in the midst of the storms of life.  Remember now his words and promises.

Christ spoke to us along with the disciples who were terrified amidst the storm saying, “Courage, I am.”  (Matthew 6:50)

Jesus makes a promise to Peter about the Church that “the powers of death shall not prevail against it”. (Matthew 16:18)

About himself he promises, “lo, I am with you always, to the close of the age” (Matthew 28:20).  Also, he says, “When the Spirit of truth comes, he will guide you into all the truth; for he will not speak on his own authority, but whatever he hears he will speak, and he will declare to you the things that are to come.”  (John 16:13)  We have the assurance of Christ’s presence in his Church and his protection, along with the help of the Holy Spirit.

Moreover, we can be sure of Christ’s compassion for those who scripture tells us that, “When he saw the crowds, he had compassion for them, because they were harassed and helpless, like sheep without a shepherd.”  (Matthew 9:36)  Immediately after this Christ sends out the twelve to preach the Kingdom of God and to minister to the crowds.

As we reflect upon the resignation of Pope Benedict XVI, I think it is important to hold fast to these promises in our hearts and pray faithfully to the Lord now and always.  Ponder these promises and remember that Christ will not leave us without himself, his Spirit, or shepherds to guide us!  Put every event within the perspective of our faith and do not let your courage be shaken when storms come. 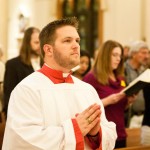 ::Craig DeYoung, a published contributor with Catholic Sistas, is a seminarian for the Diocese of Austin and, God willing, will be ordained to the presbyterate in 2014.  A graduate of Texas A&M University, he became Catholic while in college and often refers to the Easter Vigil when he entered the Church as the happiest day of his entire life.  His deepest desire is that his heart be conformed to the Sacred Heart of Christ.  His favorite prayer is “Lord Jesus, meek and humble of heart, make our hearts like unto yours.”::