My Island of Lost Things

I’m not quite sure when I officially began calling my eccentric Catholic behavior a “ministry of lost things.”

I’m not even completely sure if calling it a ministry is completely stepping over some sort of invisible line in the sand.

However, I can pinpoint when it all began.

My family had just moved. We had traded our tiny apartment, in a fancy neighborhood, for a flat just a couple miles west. The new abode came with a backyard, a dishwasher, and in unit laundry. All this might seem mundane to the non-urbanite but for those of us who hail from the concrete jungles of the world- it is well established that moving a couple miles can often feel like moving to a different planet.

I was very happy that my new planet was laundromat free.

However, what I didn’t foresee was how much I was going to miss the little town center in which I took many of my evening walks. It had little boutique shops. There was a bakery with just the most delicate little pastries glistening in the cold case. There was an independent bookstore that served wine and hosted book clubs.

In the middle of a bustling city, it was quaint.

And I liked that.

My new place is certainly an upgrade in many ways (holy dishwasher Batman!) but it is primarily flanked with convenience stores and gas stations.

It wasn’t long until I found myself a little un-enchanted with my evening walks. What was my destination now? Where was I going to go for inspiration and the post-parenting refill I had so desperately come to depend on?

That’s when I found my janky thrift store.

It didn’t smell as good as the bakery- like, at all.

It wasn’t artfully put together like all of the boutiques I aimlessly wandered around even though I was newly married and completely broke.

It wasn’t as hipster chic as the bookstore that crammed people into the little cafe area for book discussions and angry poetry.

But it is quiet and quirky.

And I could walk to it and pick up funny items like lost artifacts, turning them over in my hands while wondering why someone would have gotten rid of a hand painted mug of their own face.

It has become my little island of lost things. 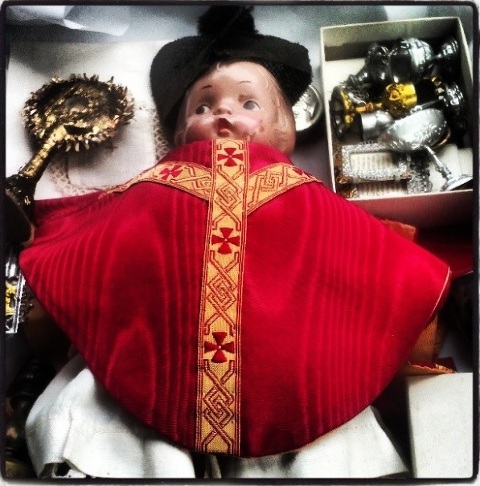 My first real “find” happened several weeks into my weekly adventure. It was hidden behind a box that contained an automatic salt and pepper shaker. (Yes, I guess that’s a thing.)

My first find was a statue of St. Tarcicus- the patron saint of first communicants. I recognized the image right away. He was similar to the stained glass image in the church where I had done my student teaching. He was young, innocent looking, and holding a chalice in his hands.

He was also $1 which seemed extraordinarily cheap considering he was beaten to death in the streets of Rome while trying to bring the Eucharist to Christians in prison.

I thought about putting him down but then a memory popped up into my head like a “Whack a Mole.” A few years previous to this experience I had been walking through a rather colorful neighborhood in Chicago when I had seen a statue of the Virgin Mary collecting dust in an eccentric second hand clothing store. 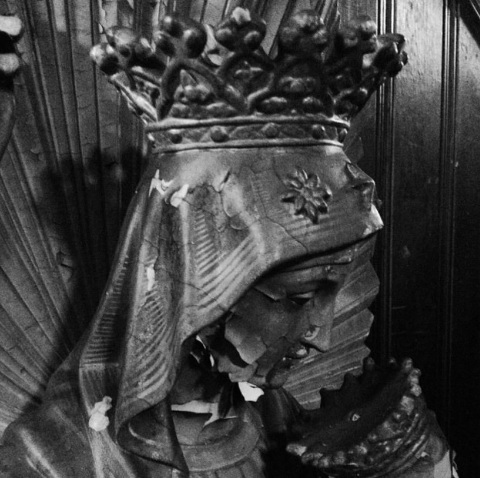 She had clearly been in a church at one point.She was also wearing a sombrero and a “Jesus is My Homeboy” shirt.

I felt so frustrated and sad as I walked past the store. Who do these people think they are? Why is it funny to mock us? Would they do this to items that are considered holy for other religions?

I got home and told my husband.

I was expecting him to side with me.

And he did- sort of.

The thought had never occurred to me. I tried to explain to him that we didn’t have a lot of expendable money. How could we afford a church sized statue? Where would we put it?

I can’t remember what he said… exactly. But I remember how I felt afterwards.

Perhaps we didn’t have tons of money. Perhaps it would have looked funny to have a huge statue of the Virgin Mary in our tiny kitchen.

But she belonged to us and in a place where people would love her and treat her with respect.

She was a part of our shared culture with other Catholics.

And ultimately, it is everyone’s responsibility to protect our story, teach others to respect who we are, and to collect and distribute useful holy items.

I could have easily found a church or religious group for the sombrero wearing Mary.

Back in the present time, I dug around in my back pocket and pulled out a crumpled dollar that I was saving for a popsicle from the palates man. (I could write a whole post about Mexican popsicles… but I digress)

St. Tarcicus now sits on my window ledge with other orbiting bits of Catholic life that I have found in the cracks of thrift stores and basements. I have collected a Ukrainian Mary and Jesus picture, stacks of icons, a Lladro Jesus, a few Marian themed vases, Catholic missals, Bibles, and a box of medals and scapulars. 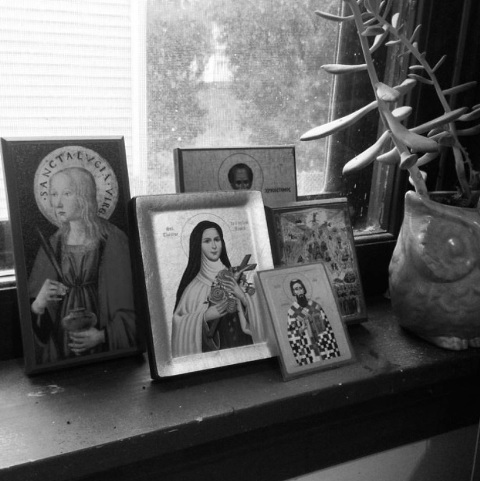 Some of these items have stayed with us but most have left and now sit on the shelves of other Catholic homes and churches.

And I would like to believe that, once again, they are loved and used properly.

I think we live in a world which trends towards a sort of romanticized monasticism. We regularly get pitched buzzwords like “mindfulness” and “minimalism.”

I am not here to disprove the importance of living in the moment or to argue that capitalism and materialism are actually the true paths towards eternal happiness.

I certainly believe that gratefulness and intentional stewardship will lead one’s soul into a more permanent and robust sense of joy.

But what I love about the Catholic Church is that there are so many “yes, and” moments. In this particular case, “YES, you can be a good steward of your wealth AND the items you use can (and should!) be beautiful.”

YES, the body of Christ can be found wherever two or three are gathered in His name AND we can make the space we do regularly meet in a beautiful representation of what we believe.

Icons of saints- teach us about a faithful life.

The Catholic Church has a working definition of truth, goodness, and beauty that extends through centuries of liturgy, art, and music. In a very (very, very, very) small way, I feel like my mini ministry can pay homage to the preservation of our identity and the belief that in this crazy, upside down world, the Catholic life will continue and ultimately prevail.

Perhaps for me- one thrift store at a time.

« Contemplating Eternity: The Encouragement of Our Lady of FatimaMommy Wars and the Battle Over Schools »