Molly and Steve had that dreaded look of anticipating something bad on their faces.  At the OBGYN clinic we drew blood from Molly to help us see whether her foetus was carrying an abnormal genetic marker. Molly was almost four months pregnant. We did not ask her for her permission, we just did it because we could not allow an abnormal child to be born without prior knowledge of the parents. They had a right and a choice to terminate the pregnancy.  That “pregnancy” at the moment of the test weighed less than a pound, and was her first child.  I was the resident on the case and told her, looking into her eyes that the test results were in.  “Molly, there is good news and bad news.  The bad news is the test came back abnormal, but the good news is that the risk level for your foetus having a genetic disease went from 1 in 4000 to 1 in 1600.  That is still really low.”  She never heard me after the word “bad”.  Steve began to smile, and tell Molly that 1 in 1600 was great odds that their baby was fine.  Molly never used the word baby.  Molly never made eye contact with me again.  Molly said, “I can’t deal with this… monster.  I want an abortion.  I want it gone.”  Steve and I tried to speak with her about the test and the risk analysis and the still great probability that their child was normal and healthy.  She did not want to hear any of it.  She wanted “it” out.  Since I was her doctor, I had to do what she asked even though I knew the foetus was healthy.  She did not want it. So, I aborted her healthy baby 24 years ago.

Steve and Molly never saw the child, never held their baby boy.  After a while, you can tell the screams and the wails of parents when they abort their sick children for “merciful” reasons.  They are different than the birthing sounds of a wanted child and the accompanying labor.  They are very different than the muffled sounds of the almost silent tears of a woman undergoing an early abortion at the clinic.  There is a different more curdling sound when a mother ends the life of her abnormal child and then finds out it was normal. Fear modulates the wailing.  Molly’s wailing is still present somewhere in the recesses of my memory.  A reminder of sorts, for I am now a practicing OBGYN in northern Virginia outside of Washington DC at a large prolife medical practice.

Recently, Jenny drove almost two hours, after stopping at four other “good” OBGYN practices, to seek us out at the Tepeyac Family Center.  You see, her baby’s water broke when her little one was three months old in her womb, and she wasn’t at the point of saying goodbye.  Jenny told me that her “little cashew” was in trouble and she wanted to see if anyone would try to help her hang onto this pregnancy until nature forced her to do something drastic.  She just wanted to spend time with her sick child.  Through friends, she heard about our perinatal hospice and our outreach to pregnancy center women in crisis pregnancies and she thought we might offer another option than “mercifully ending this pregnancy”.  We did.  All the doctors spoke about this case at our high risk conference, we looked at the literature and realized that it was good medicine to wait and see with Jenny and her “cashew”.  Thirty five weeks later when her “cashew” turned into a large “eggplant”, via bedrest and caution and addressing fears and balancing expectations, and praying for guidance from our Heavenly Daddy, we delivered Jeremy, a healthy, 5 pound, vigorous baby boy to Jenny and her husband.

A foetus became a baby.

A monster became my sick son.

Fear was trumped by love.

A technician of death became a doctor of life.

She promised if I “do whatever He tells me”, I would become alive.  She was right.

He promised, “I make all things new.”   He delivered.

Love conquers fear.  There is a deeper meaning to suffering.

I am a new creation, and a servant for love and mercy as an OBGYN.  Our Tepeyac Family Center and our larger network Divine Mercy Care are instruments for true healing.  We have pillars of practice.  Health is based on relationships found in community: between doctor and patient, between patient and family, between the haves and the have nots of the neighborhood, and between both doctor and patient and a loving Heavenly Father.  Medicine is an act of mercy not a right nor a commodity and definitely not a political football.  We must learn daily to hate the disease and love the patient, to cooperate with fertility and treat diseases not desires.  So, when we work together and collaborate and do our small portion to love enough: doctors partner with pregnancy centers; and partner with maternity homes for care and compassion; and partner with  social service agencies in our counties to access programs; and partner with medical schools to teach merciful medicine; and partner with churches from all creeds to serve the least of our brothers and sisters; abortion will become unwanted; children and human life will be welcomed; families will be strengthened;  and the Divine Physician will be returned back to medicine and we will have a renewal, a renaissance not only in our communities but in our hearts.

Love God.  Love neighbor.  By “transforming hearts through healthcare,” Divine Mercy Care and the Tepeyac Family Center continue to be beacons of light for other patients and providers for excellent, compassionate and integrated healthcare, and a source of humility and a reminder of whom I serve. 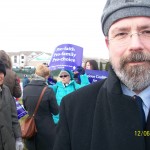 ::Dr. John Bruchalski, a fellow of the American College of Obstetrics and Gynecology lives in Herndon, Virginia with his wife and two children and his father.  Dr. Bruchalski is the Founder of the Tepeyac Family Center and Chairman of Divine Mercy Care.  He serves on the Board of the Jerome Lejeune Foundation, the Breast Cancer Prevention Network, and Medical Students for Life, and is a medical consultant for the Couple to Couple league and Family of the Americas.  The renewal of medicine is a passion of his.::

« Delaney LisieuxA Child Shall Lead Them »