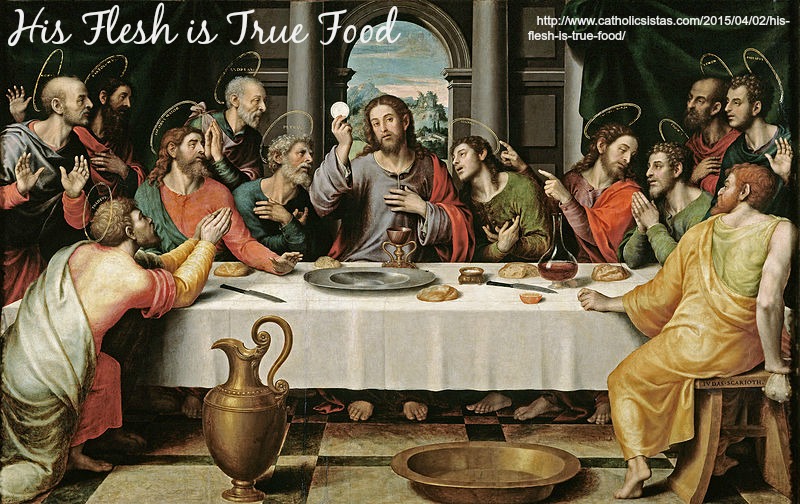 These are Jesus’ words at the Last Supper, on the first “Holy Thursday,” as he offered to his apostles what appeared to be bread and wine. As Catholics, we believe that Jesus meant these words quite literally, just like when he said “my flesh is true food and my blood is true drink” (John 6:55). Thus, we remember the Last Supper not just as Jesus’ last meal with his apostles before his betrayal, but as the event at which he instituted the Eucharist and established the priesthood.

The mystery of Jesus’ true presence in the Eucharist is central to our faith; yet so many Catholics do not believe it. I admit it’s intellectually difficult to grasp (which is why it’s a mystery), but that’s why Jesus told us that we must have the faith of children in order to enter Heaven. In my experience, children readily accept the mystery of the Eucharist even though they do not fully understand it. They are awed, rather than disturbed, by the idea that Jesus offers his true body and blood for us to consume.

When I was a little girl, my mother told me that the beautiful white marble “box” at the front of our church held Jesus. I remember wondering how Jesus’ body could fit into such a small space, and thinking maybe all the marble stretching out on either side was also part of his tomb. Or maybe it was just his bones stacked up in that small compartment, rather than his whole body. Either way, I believed that what my mom said was true. Jesus was present there.

I don’t remember when I realized what my mother had meant – that what was inside the tabernacle was Jesus’ body, blood, 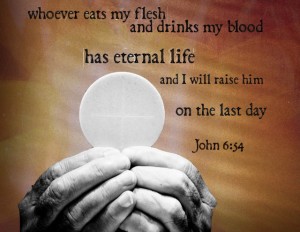 soul, and divinity disguised by the appearance of bread. But I know I believed that as much as I believed my mother when I thought she was talking about Jesus’ corpse or his bones. I don’t remember questioning it until I was about 19 or 20 years old. When I was 16, I tried to convince my non-Catholic friend that the Eucharist was really Jesus just by reading from John 6. In my simple faith, I assumed he didn’t believe it only because he had never read that part of the Bible. Needless to say, he was not convinced.

I was a freshman in college when influences in my life caused me to doubt the truth of the Catholic faith. I didn’t reject or cease to practice it. I simply went about my normal life, but with the nagging thought that maybe what I had always believed was not true. Sometimes accompanying that thought was a suffocating anxiety and a sick feeling in the pit of my stomach. I was scared of the prospect of abandoning the faith I grew up with. I realized I had to counteract those voices speaking against my faith, so I started researching online to understand more of the “whys” behind the “whats.” I wanted to know the Capital-T-Truth, even if it hurt me, and hurt my family, and made my world come crashing down. I didn’t want just to do and believe what was comfortable.

I don’t know how long I spent researching, or all the different subjects I read about, but I do remember the flashing neon sign indicating that I had found the Truth I sought. That sign was a website about Eucharistic miracles. I read about an 8th century monk who was doubting Transubstantiation. One day when he said the words of the Consecration, the bread and wine changed visibly into flesh and blood in his hands. Those in attendance at the Mass also saw it, and spread news of the occurrence far and wide. The piece of flesh and the coagulated drops of blood remain uncorrupted, and are on display in the town of Lanciano, Italy, where this miracle occurred. The flesh and blood have undergone many investigations of their authenticity, including in the 20th century with modern research tools and methods. Each investigation has confirmed that this is indeed true human flesh and blood, inexplicably preserved. Among other amazing findings, scientists have identified the flesh as heart tissue, and the blood as type AB. 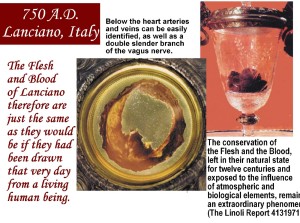 The miracle at Lanciano is one of the most famous and earliest of recorded Eucharistic miracles, but countless others have occurred over the centuries, often to strengthen the faith of doubting priests. When I studied abroad in 2005, I had the privilege of seeing a blood-stained cloth from a Eucharistic miracle that occurred in another Italian city, Bolsena (the cloth is displayed in nearby Orvieto). There are also accounts of saints who subsisted for years on the Eucharist, consuming nothing else. Then there are the personal stories of the faithful, which remain hidden in their hearts – not stories of bread and wine visibly becoming flesh and blood, but stories of physical, mental, and spiritual restoration after receiving the Eucharist; stories of an overwhelming sense of peace when praying in front of the Host in adoration; stories of an inexplicable longing for that “bread and wine.”

Truthfully, Eucharistic miracles and the doctrine of Transubstantiation defy all human logic. How is it possible for what looks like bread and wine to be the flesh and blood of Jesus? How can He be present in every tabernacle and at every Mass world-wide at once? How can a piece of bread visibly transform into human flesh in the hands of a doubting priest? How is it possible that the piece of flesh along with the drops of blood remain uncorrupted hundreds of years later? Scripture says, all things are possible with God. These things are not any less possible than God becoming man, dying on a cross, and rising again.

Using your intellect alone to try to make sense of these mysteries is not going to get you anywhere. It will not suddenly lead to belief in the heart of a persistently disbelieving person. You easily could write off the miracles as hoaxes or works of satan. It wasn’t my intellect that told me “this is the Truth” when I read about these miracles. The neon sign that I spoke of was illuminated by the light of faith. I just KNEW in my heart and soul that these were real. And knowing that the Catholic Church got this truth right helped me to know that she really is who she claims to be.

I have read many arguments for a literal interpretation of John 6 (see here, here, and here for examples). I want to “be ready to give an explanation to anyone who asks.” These arguments satisfied my intellect in a manner that was complementary to the faith that I had been granted by God as a gift. When John 6 is read without that supernatural faith, the concept of eating Jesus’ flesh and drinking his blood is easily dismissed as ridiculous and untenable, even by those who call themselves Catholic. But when God gives you the “ears to hear” and “eyes to see,” it becomes so clear that it’s impossible to read Scripture otherwise.

Utmost reverence shown toward the Eucharist greatly aids the nourishment of that gift of faith. I long for the days when the tabernacle was a focal point of every church, when people kneeled to receive our Lord, didn’t make idle conversation inside the nave of the church, genuflected with awareness of what they were doing, sang sacred hymns during Mass, and dressed up for church like they were going to meet a King. Those things clearly communicated the belief that Jesus really meant what he said. Without them, it’s much easier to lose that child-like faith that Jesus is really there inside that marble box and those golden vessels.

One Reply to “His Flesh Is True Food”