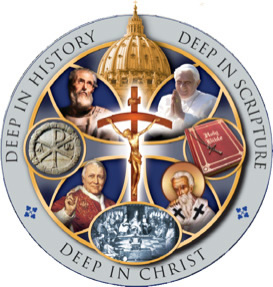 In the first part of my “coming home” story, I described how my Christian life began and how, only a few years later, God began to place a burden on my heart for the lack of unity within the Christian family. If you missed the Part 1, you can read it here.

This dissatisfaction I felt with the existence of multiple Christian denominations, and the understanding that this was not what God had in mind for his family, nagged me through the months that followed high school graduation. As I mentioned in the previous post, I left behind the Baptist church I grew up in, and became a member of a non-denominational church, as I felt this was the best solution for refusing the divisions created by man. The concept of “denominations” was what I had become adamantly against, and this church did not claim a title.

At this point, the Catholic Church was the furthest thing from my mind as an option I would consider.  The only words I ever heard spoken about the Catholic Church were in a negative manner by non-Catholic friends and church leaders, who claimed that very few Catholics, save the Catholics who didn’t believe most of Church Teaching, were going to Heaven due to their lack of relationship with God, worship of Mary and the saints, the ungodly practice of keeping Jesus on the cross, and a host of other allegedly unbiblical doctrines. I had even read a book, provided to me by my non-denominational young adult group that described “facts” on “false teachings”. Amongst Hinduism and Islam was a chapter on  Roman Catholicism, which explained all the reasons why it is clearly unbiblical, a false religion created by deceptive men. If I had this book in my possession now, I am confident that I could point out all the flaws in the author’s presentation of Church Teaching and use of Scripture, but I regress.

It was at this point in my life in which God chose to introduce to me my future husband. God’s perfect timing turned out to be the August after I graduated high school. I had chosen not to date anyone unless I could see myself marrying them, in which case we would explore the possibility of marriage. As Jordan pursued me, I felt a peace about opening my heart to a courtship with him. He met every quality on my future husband “list”, with the exception of one: he was not a Baptist or a non-denominational, but Catholic.

Jordan was raised Catholic, but at the time we met he did not have a strong passion for his faith. He knew the basics of what he was taught growing up, and for the most part attended mass weekly, but this was ultimately the extent of his Catholic devotion. However, he spoke often about praying for our relationship and exhibited fruits in his life that made me confident he was growing in the Lord, “in spite” of being a Catholic. As we became serious and it became knowledge to both of us that we would one day be married, he readily attended church and weekly Bible study with me without ever involving Catholicism in our relationship. I figured that we would simply continue to go to church there and non-denominational Christianity is the faith in which we would raise our future children.

A few months later, in a stunning plot twist, Jordan began to get more and more enthusiastic about the Catholic Church. It seemed to happen overnight. One day he was at church with me, seemingly soaking in the charismatic worship and Protestant sermon, and the next he was talking about going to mass, reading Catholic apologetics books, and meeting with a priest for discussion. I was completely caught off guard by this sudden devotion, and I was scared; Jordan was my best friend and accountability partner, and I honestly felt that he was getting caught up in a deceptive religion that kept souls from experiencing freedom in Christ. I expressed my concerns with him, and he told me things that seemed completely off the wall and terrifyingly untrue: Mary is available to pray for us and intercedes for us in the same way a friend on Earth might. The Lord’s Supper in a Catholic Church is not a symbolic memorial service, but the true flesh and blood of Jesus Christ. Speaking of Jesus Christ, he founded the Catholic Church.

I challenged everything he said. I demanded Scriptures (and learned that, indeed, my belief that everything must be written in the Bible is not found in the Scriptures!). I brought up Catholic doctrines that I thought were wrong, and he was able to provide a sound explanation of each, through Scripture, through history, and through applying my understanding of God’s character and nature. But I would not be deceived. I knew what I had always been told about the Catholic Church, and I was sticking to that.

This was a very hard time in our relationship. We argued and debated about theology often and as a result, God became a touchy topic that was often avoided. Though he still came to church and Bible study with me, he adamantly refused to miss mass. One day at church he passed on participating in the Lord’s Supper, telling me it was contrary to his beliefs that Jesus was speaking literally when he said “this is my body”.  I cried the rest of the day.

Several times I considered ending the relationship, but I never felt a peace about it. I felt God speaking to me that I should wait out the storm, and one day this would no longer be a barrier between us. I took this to mean that Jordan would see the errors in the Catholic faith and leave this religion behind. I earnestly prayed day and night. I fasted and prayed. I had others in my church pray. I prayed that we would both find Truth, even if it was contrary to the way one of us was always taught.  Additionally, I took the same approach of John Henry Newman and sought to become an expert in the history of early Christianity so I could use that information to disprove the assertion that the early Christians were Catholic in belief and worship practices.

That was the beginning of the end of my days as a “non-denominational”. As John Henry Newman said at the end of his own research, “to be deep into history is to cease to be a Protestant”.

The historical facts could not be denied. The early Christian Church was not just an unstructured group of men playing songs on a guitar and talking about how much they love God, as I once thought. It was a Church with structured leadership, beginning with Peter, to whom Jesus gave the “keys to the Kingdom of Heaven”, and the authority to “bind and loose”. (Mt. 16:18,19) I learned that “keys” were a sign of authority, signifying that an office was being created; one that is bigger than the current holder, and would continue after that person died. I learned that historical writings from the earliest Christians showed that the beliefs of the first Christian Church were the beliefs still held by the Catholic Church today. I found that my passion against man-made denominations was actually a very Catholic viewpoint, as denominations were indeed created by man, a response to refusing the role of the Catholic Church as the authority of Christ.

I can still recall the night all my studies of history and re-evaluation of certain Scriptures fell into place, and I realized the answer for refusing the Christian civil war. My blood went ice cold at first, and then warm, as words of realization spoke to my spirit: Christian unity cannot be possible without a single, binding Teaching office. Private interpretation of Scripture leads to different conclusions, which leads to different churches and denominations, which creates disunity. This is why Christ gave us a Church, divinely guided by His Spirit, to preserve the Truth of God’s Word. And as history shows, that Church IS the Catholic Church.

At that moment, I ceased to be a Protestant. I did not know everything the Church taught, and some of what the Church taught I was still skeptical on (it took some time before I had enough faith to believe Christ was truly present in the Eucharist). But that didn’t matter: in choosing to come into the Catholic Church, I was saying “I don’t know everything, and there are some things I am inclined to disagree with. But if I disagree, it is not because the problem lies with the Church—it is because the problem lies with me and my private understanding of Scripture.”  The one thing I knew for certain, and the only thing that mattered, was that the Catholic Church is the only Church established by Christ and not man, and it’s in this divinely guided Church where the fullness of Truth and Christian unity lives.

It was scary to leave the only type of Christianity I had ever known. I experienced a “culture shock” of sorts, and wondered if I would ever truly feel at home in such different surroundings. Additionally, I lost a few friends who felt betrayed by my choice to become Catholic. They did not experience the same change of heart as I and still believed I was being misled. Many people thought I became Catholic simply for a boy. A friend of mine was told by a leader in her church that I allowed my love for Jordan cloud my spiritual judgment. However, I would be willing to stand before my Lord, look Him in the eye, and say with honest conviction that my decision was based solely on a realization of Truth, after a close study of Scripture and history. Jordan and I were both on paths to the Truth, and I like to say we found it together. It was because of me exposing him to an alternate Christian perspective that he began to look deeper into the Church, and it was because he challenged my beliefs that I felt the need to seek Truth.

Jordan and I began RCIA classes in September 2008, me as a baptized Christian and him as a Catholic update. On April 11, 2009, I received the sacraments of confirmation and Eucharist, entering into full Communion with the Catholic Church. In the years since, we have served as sponsors in RCIA, helping guide other people to the beautiful, Christ instituted sacraments. This is because four years ago, as an anti-Catholic evangelical Protestant, I asked God to help me reunify the Body of Christ. At that time, I didn’t know where to start, but now I do.

In order for us to worship as one, we all need to be  home. Christians of all faith communities need to return to the home Christ built for us 2000 years ago. That home is the Catholic Church.

“Where the Bishop is, there let the multitude of believers be;
even as where Jesus is, there is the catholic Church”

5 Replies to “Going AWOL Out of The Christian Civil War: How My Desire for Christian Unity Lead Me Home to The Catholic Church (Part 2))”