In our little “School of Joseph”, named by my oldest preschooler, we try to focus on a Bible story a week. During letter ‘F’ week, I decided that we would talk about Jesus calling the apostles and asking them to be “fishers of men”.

I must say it’s one of my favorite passages, and I just love that analogy. It paints such a beautiful picture of what Jesus is calling us to do. But, I wasn’t sure that my 4, 3, and 2 year old would quite understand what it meant. So, I devised a game.

First, we read the passage straight from The Bible: “As he was walking by the Sea of Galilee, he saw two brothers, Simon who is called Peter, and his brother Andrew, casting a net into the sea; they were fishermen. He said to them, Come after me, and I will make you fishers of men. At once they left their nets and followed him.” (Matthew 4:18-20). We talked about what it meant to be fishers of men, and what kind of sacrifices Peter and Andrew must have made in their lives to leave their nets, “at once”.

Then, we played our own “Fishers of Men” game. I used blue yarn to create the outline of a sea, and cut fish out of construction paper. I used a butterfly net for catching the fish to make it as close to the Bible story as possible, but you could also use a magnetic fishing pole and put paper clips on the fish to catch them.

On each fish, I wrote a place that the children and I go, where they may have the opportunity to be fishers of men. In other words, a place outside of our home where they have the chance to interact with other children in a Godly way. Some of these were the library, playdates, the neighborhood, McDonald’s play area, Lowe’s, grandma’s house, etc., and I left one blank so that if they got that fish they could come up with a place on their own. 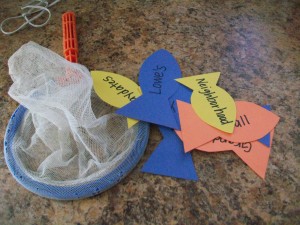 Then, we took turns fishing. Each child would get a turn with the net, and choose a fish from the sea. We would read the place name and together try to come up with ways to act Christ-like towards other people. I tried to let the kids come up with some ideas on their own, but of course if they were struggling, I helped them come up with answers. For example, at our local library, they have a train table for the kids. My son said that if there were lots of younger children playing at the table, he would give his train to one of them so that they could play. We talked about how him making this small sacrifice was similar to what Peter and Andrew must have gone through to follow Christ. 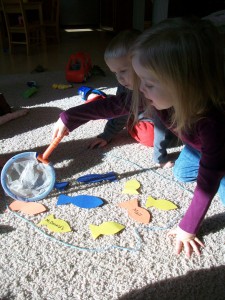 The kids really had a great time playing. It reinforced the ideas in our original discussion of the Bible story, and they had a lot of insight to share when we made it personal to their lives. The kids had such a great time playing the game, that when we were done, they decided to use the props to reenact the passage as well, which is another great way to scaffold learning.

Try the game and let us know what great things your children come up with!

2 Replies to “Fishers of Men: The Board Game”