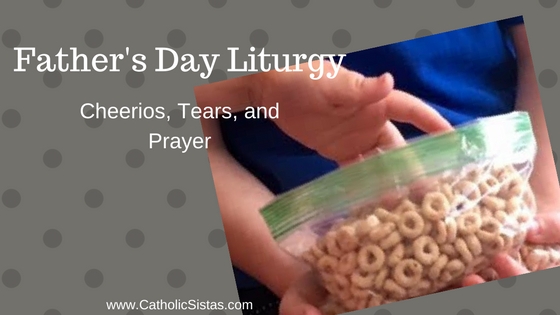 Mass with a five year old and a two year old. It’s a beautiful, chaotic, maddening, complicated adventure, isn’t it? The longest hour of the week for sure. How can 60 minutes seem so excruciatingly slow one morning, but the next day, let’s say when I am rushing to get one to school and the other to daycare it whizzes by?

Prior to March 24, 2015, I was never so proud as when we went to church as a family of four. In my mind there was nothing more beautiful than a family worshiping and growing in faith together. Sure it was a challenge with little ones, but always a time that I treasured, honored, and looked forward to each week.

Fast forward a year and three months, and I am absolutely anxiety ridden about taking my children to mass. It’s ridiculous to think that way, I know. Church is a safe haven, but as I sit there trying to juggle a preschooler and a toddler I am constantly reminded that he left us. That he is so ill that he cannot comprehend that he would have been supported, cared for, and forgiven within the Church. He has left us and it is now just me, the boys, and a bag or two of Cheerios in the fifth pew.

On Father’s Day 2016 I ventured to mass with my own father and two children. Armed with a bag of church appropriate goodies (which I was very much against when we were a family of four) I was determined to have a peaceful, faith filled hour. My soon-to-be Kindergartner got it. He did great, the toddler was a young two, so it was the typical struggle of an inquisitive 27 month old.

But it wasn’t their behavior that caused the anxious pain in my heart that day, they were actually quite well-behaved on the third Sunday of June. Instead it was the message. As I tried to squash my single mother anxiety when I prepared for mass that morning, I didn’t think about the possible homily. I didn’t think about the message that might be shared on our first official Father’s Day without him.

The priest began with statistics. Statistics about children from a fatherless home. The priest spoke words like, “low self-esteem, poverty, addiction…” These words made me uncomfortable, a little angry, somewhat sick. “Those will not be my children,” I thought to myself. However, before I could dwell on his statistics, the priest said (quoting Pope Emeritus Benedict XVI), “when human fatherhood has dissolved all statements about God the Father are empty”. This idea played over and over in my mind, as I held back tears. It made perfect sense – if one doesn’t understand what it’s like to have a human father, it is difficult to understand and trust in God the Father. With that statement my purpose became clear. After that statement, my dedication to sharing the faith with my children became renewed. I vowed to live a Catholic vision of family life for my children no matter the circumstances.

With this in mind, I sought to answer two questions:

These are complicated and loaded questions that will most likely take me the next 20 years to answer, yet I have in my heart a simple plan: model and pray.

It’s a great responsibility to model our faith for our children. Our behaviors are what truly reveal our beliefs. It can be frightening when we become aware that our children are listening to us and watching us much more closely than we ever realized. We are the first and the primary teachers of faith to our children. I never expected to carry that responsibility on my own, but my situation only strengthens my commitment. I know that I must model the faith in hopes that they can experience the true love and trust of God the Father.